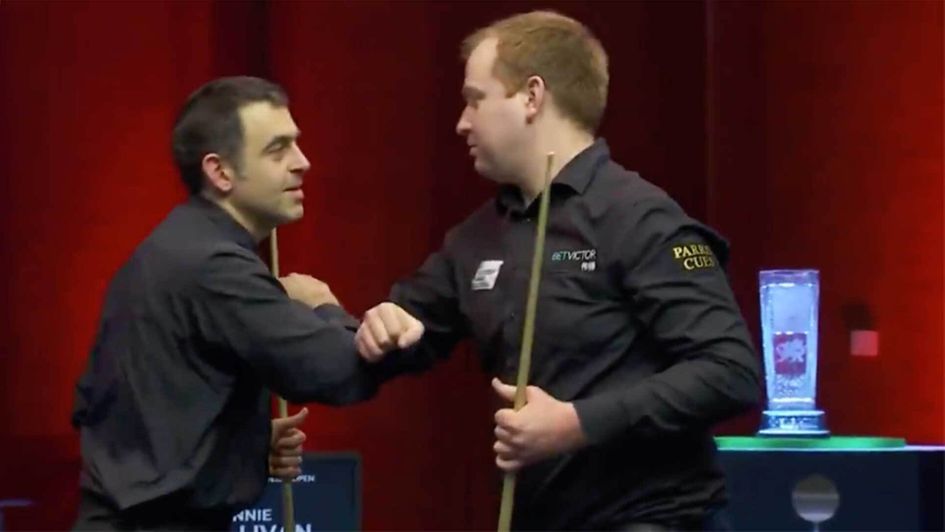 Jordan Brown pulled off one of the biggest shocks in snooker's recent history as he beat Ronnie O'Sullivan 9-8 in a pulsating final of the Welsh Open.

The little-known Northern Irishman would have lost his place on the tour but for qualifying for the Crucible last summer, but he was deserving of winning his maiden ranking title, staring down the six-time world champion and bossing the match for large periods.

Still, O'Sullivan hung in with a grit, determination and a dose of genius, and he looked set to deny Brown his big moment when claiming the opening three frames of the evening session to lead 6-5 and then again when producing a masterful clearance of 119 to force a deciding frame.

When he fluked the opening red of the 17th frame, O'Sullivan might have believed lady luck was indeed smiling down on him, but missing the subsequent blue from distance opened the door for Brown who held himself together with all the poise of a seasoned winner to compile a match and tournament-winning break of 74.

An emotional Brown said afterwards: "I'm absolutely speechless. First of all, it was an absolute honour to play Ronnie O'Sullivan in the final. He's the greatest of all time and it's just a privilege and an honour to play him.

"I've just always believed in myself. I've had some dark days in my snooker career but that's what makes you stronger as a player and a person. I was working full-time in a petrol station, and as well as that I was playing full-time snooker, but five years ago I said to myself 'give it a proper go' because I'd never really committed myself before that.

"I'm just getting used to the big stage and I feel like I belong here."

O’Sullivan was gracious in defeat and added: “You’re not a bad player if you beat Selby and Maguire so I knew he would be comfortable on the big stage and I’m not surprised.”

Jordan Brown used to make his living as a petrol pump attendant five years ago and almost walked away from snooker.

🏆 But at the age of 33, he's just beat the greatest of all time Ronnie O'Sullivan 9-8 to win his maiden title at the Welsh Open.pic.twitter.com/S5ng9Ftthb

Having prevailed in four final-frame deciders already this week, Brown was well-equipped for what O'Sullivan had to throw at him but was visibly rocking when watching the 5-3 lead he had built in the afternoon session turned on its head as O'Sullivan resumed with quickfire breaks of 68 and 61.

However, Brown somehow managed to edge a crucial frame 12 that O'Sullivan will feel he should have won having been well-set to clear until losing the white with the colours at his mercy. Buoyed by stopping the rot, Brown inched back in front at 7-6 but O'Sullivan levelled again to leave the contest firmly in the balance with three frames to play.

O'Sullivan appeared to be making his move when building a handy lead in the 15th frame, but he cursed in frustration when over-cutting a simple pink and Brown made him pay with a nerveless run of 56 to move within one frame of the title.

Still unbowed, O’Sullivan found a stunning long blue to pave the way for a quite brilliant clearance of 119 to force a decider, but just as he sensed his 38th ranking-title victory, Brown stepped in to claim his first, along with the £70,000 winner's cheque.

When the Rocket was that age he'd won 22 ranking titles from 32 finals!

Jordan Brown is within touching distance of a maiden ranking-title victory after building a 5-3 lead over Ronnie O'Sullivan in the final of the Welsh Open.

O'Sullivan has looked untouchable all week - only dropping two frames in five matches - but any hopes he would meet scant resistance in his march towards his first tournament win of the season soon diminished after Brown made an assured start to the biggest match of his career so far.

In a scrappy opening frame, it was the Northern Irishman who settled the better and he looked even more at ease when adding a break of 58 in frame two to double his lead.

O'Sullivan finally burst into life when putting together a timely run of 74 in the third frame, though he needed a huge fluke to keep the break going when Brown would have surely fancied his chances of producing a telling counter.

😲 Ronnie O'Sullivan was up against it at 2-0 down to first-time finalist Jordan Brown at the Welsh Open...

...but this fluke helped him pull a frame back!pic.twitter.com/IsS2gPODjy

Brown wasn't perturbed, however, and responded with another polished, frame-winning contribution - this time of 78 - to extend his advantage to 3-1 and make sure he was the happier of the two players at the mid-session interval.

When Brown added a break of 107 immediately after the resumption, O'Sullivan might have been forgiven for letting his head drop, but it was a measure of his focus, and respect for his opponent, that he turned down the chance to chase a 147 maximum break in the sixth frame, instead reducing his arrears to 4-2 with a fabulous 135.

With his tail up, the world champion fairly motored round the table in the following frame as he brought up back-to-back centuries - and the third successive one in the match after Brown's earlier ton in frame five - to get back within a frame of the world number 81.

The dazzling standard looked set to continue when O'Sullivan opened his account in frame eight with a thumping long red that was cued to perfection, but when he broke down soon after, the frame turned scrappy as the importance of the afternoon's final act dawned on both men.

O'Sullivan blinked first, a couple of poor safety shots handing Brown control of the table, and he steeled himself for a cool clearance after developing the final red with a brilliant cannon, one which ensures he will hold a precious 5-3 lead going into tonight's final session.