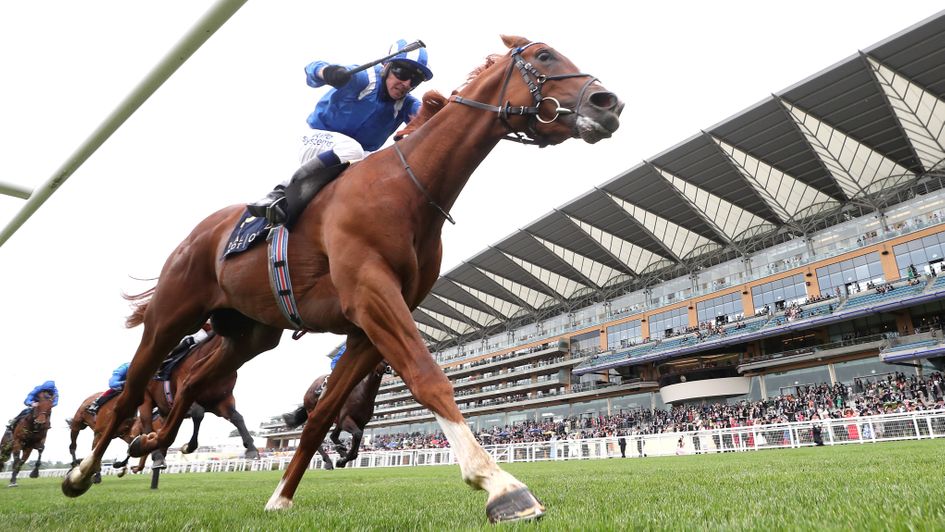 William Haggas does not underestimate the task faced by stablemates Mohaafeth and Alenquer in Wednesday’s Juddmonte International Stakes.

There was pre-race drama on Monday morning when Love stepped in to replace favourite St Mark’s Basilica in a field of seven for the latest leg of this year’s QIPCO British Champions Series.

The surprise addition of last year’s QIPCO 1000 Guineas and Investec Oaks winner comes after her own stablemate, who had won four Group Ones in a row including the two French colt’s Classics, suffered a minor injury on the gallops.

She promises to be just as tough an opponent for the Haggas pair, but both of them are expected to up their game.

Using the no-nonsense language that his county is famed for, proud Yorkshireman Haggas describes Mohaafeth’s Group Two third behind Bangkok over Wednesday’s course and distance as "a balls up, from start to finish" and added that we could forget Alenquer’s Group One third behind Hurricane Lane at Longchamp, since "he was way too far back".

Sky Bet: Either Alenquer OR Mohaafeth to win - 4/1!

Both colts had previously shown more than a glimpse of the sort of form that will be required.

Mohaafeth rose rapidly through the ranks in the spring was well fancied for the Cazoo Derby until soft ground at Epsom ruled him out on the day, after which he was a good winner of Royal Ascot’s Hampton Court Stakes, run over a mile-and-a-quarter on fast ground.

Alenquer, whose King Edward VII Stakes win at Royal Ascot came after the ground turned heavy, began the season by beating none other than the Cazoo Derby and King George VI and Queen Elizabeth II Stakes winner Adayar in Sandown’s Classic Trial.

Elaborating on Mohaafeth’s York defeat, Haggas said: “The pacemaker went too slow and Jim [Crowley] was too far back. It was a mess, and you can put a line through it.

“Angus [Gold, of owners the Shadwell Stud] felt that if you ignore that run and concentrated on the good bits he was well worth his chance here. The trip is fine and the ground should be okay too, although I think there’s some rain about on Tuesday. He’s got a bit to find but he’s useful.”

Sky Bet Special: Either Mohaafeth or Alenqeur to win Juddmonte International - 4/1 from 10/3

Alenquer has been prominent in betting on the Cazoo St Leger, but that has effectively been ruled out and he runs here in preference to the Great Voltigeur Stakes, which takes place 35 minutes before the Juddmonte International.

Haggas, who loves this week more than any other in the calendar, said: “The owners felt that as he had already won a Group 2 there was no point running in another one. They want to test him against the best, and he’s very well.

“He’s improving, and again you can put a line through his latest run at Longchamp as he was way too far back and never got into it at all. I don’t think he’s the soft or heavy ground horse that some have him down as, but he might just want a bit further. He’s not a bad horse.”

He added: “It’s an ambitious route for both horses, but they’ll both run a good race. Whether they are good enough is another matter.”

While Mohaafeth and Alenquer have to prove their class, it’s stamina that is potentially the issue with Andrew Balding’s triple Group 1 winner Alcohol Free, who has yet to race beyond a mile and is by the Norfolk Stakes and Prix Morny winner No Nay Never.

Owner Jeff Smith’s outstanding sprinter/miler Chief Singer finished only third in 1984 when upped in trip after winning the St James’s Palace Stakes, the July Cup and the Sussex Stakes, but there was mitigation on that occasion and Smith, who is nothing of not sporting, was a shock winner of another Juddmonte International in 2015 when Arabian Queen ended the unbeaten run of Derby winner Golden Horn.

Oisin Murphy has partnered Alcohol Free to all of her wins and a fourth Group 1 would equal his tally on the brilliant Roaring Lion, on whom he won the 2018 Juddmonte International.

Murphy, who has been lucky at York and describes the Juddmonte International as “a very special race”, said: “I don’t draw comparisons because Alcohol Free is a very light-framed, athletic, feminine type of horse and Roaring Lion was the opposite - very strong and a very different character - but she’s been a superstar for me.

“You don’t have easy races at Goodwood, but she came out of Goodwood very well. She’ll either stay or she won’t, and whatever happens won’t detract from what she’s already achieved. There will be plenty of time afterwards to freshen her up for QIPCO British Champions Day.”

Acknowledging the need for her to settle to have a chance of lasting home he added: “She’s not a difficult ride once she’s in behind, and I’ll hopefully be able to get her in and switch her off, although she can be quite electric from the gates even when I don’t want her to be. Arabian Queen was a Queen Mary type at two and there were stamina doubts with her as well.

“With a filly there’s nothing to lose and I would imagine we could be seeing her next year as well.”

Substitutes simply don’t come any better than Love, who ran away with the Yorkshire Oaks 12 months ago on her third and final start of the year and resumed by beating Audarya in Royal Ascot’s Prince Of Wales’s Stakes for her own fourth straight Group 1, before finishing third to Adayar back at Ascot in a tactical King George VI and Queen Elizabeth QIPCO Stakes.

O’Brien’s first win in the Juddmonte International came with ‘the iron horse’ Giant’s Causeway, who reprised his famous head victory over Kalanisi in the epic 2000 Coral-Eclipse by repeating the feat by an identical margin at York. Japan gave O’Brien a sixth win in 2019 and a seventh success with Love would give him the outright record in the race for a trainer, which is currently shared with Sir Michael Stoute.

Last year’s Prix Du Jockey Club winner Mishriff merits the utmost respect too, having taken his earnings past the £10m mark by adding placings in the Coral-Eclipse and the King George VI and Queen Elizabeth QIPCO Stakes to his hugely lucrative wins abroad in the Saudi Cup and the Dubai Sheema Classic. If successful, he would be a second winner of the race for the Gosden stable after Roaring Lion.

Jim Bolger’s Tattersalls 2000 Guineas winner Mac Swiney can be a big factor too, dropping back to an intermediate distance after failing to last home in both the Cazoo Derby and the Dubai Duty Free Irish Derby. His stable-mate Poetic Flare underlined the strength and the hardiness of the Bolger colts with a superb second to Palace Pier at Deauville on Sunday.

The field is completed by Kevin Ryan’s Juan Elcano, who won the Listed Wolferton Stakes at Royal Ascot and finished narrowly ahead of Mohaafeth behind Bangkok at York last month.