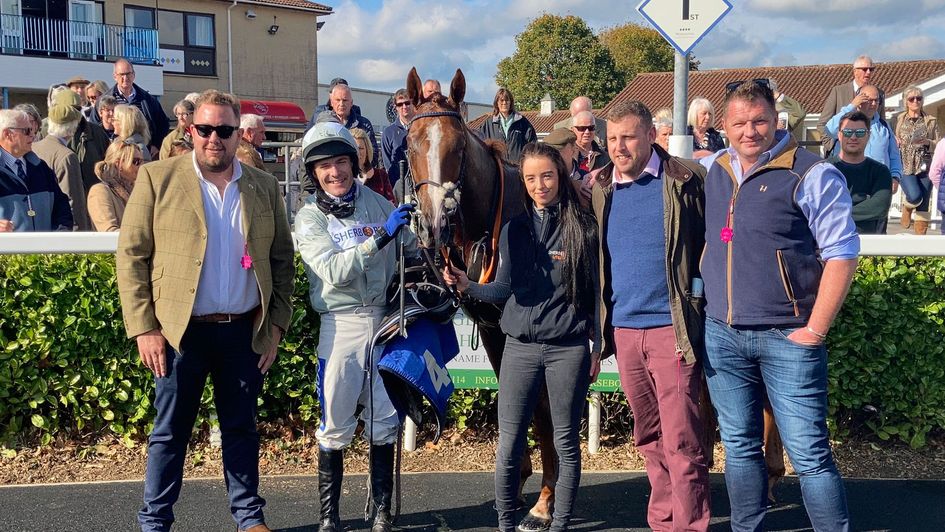 A review of the action from Wincanton on Thursday as Mascat made an impressive start to life over obstacles.

Hosie boost ahead of new career

Owner Syd Hosie hopes the debut victory over hurdles for Mascat at Wincanton is a sign of things to come for stable star Coup De Pinceau in next month’s 60th Badger Beer Handicap Chase at the Somerset track.

The Ralph Smith-trained four year old made his first jumps start for Hosie, and fellow owners Ian Cahill and Olly Watt, a triumphant one when brushing aside his rivals with ease in the opening MansionBet Proud To Support British Racing Maiden Hurdle to justify 13/8 favouritism.

Moving smoothly into contention the gelded son of Zoffany, who was purchased for 35,000 guineas out of Ralph Beckett’s yard earlier this year, only had to be nudged out by Tom Scudamore to defeat Right Destination by a length and a half in the two-mile contest.

Although Hosie is currently listed as an owner of Mascat, he will also be his joint-trainer in the future after announcing that he is currently in the process of completing his training modules ahead of taking out a joint-license with Smith.

Hosie said: “That was a great start to the season, and it was Olly’s first ever horse. He looks enthused but I think he had left a pint of cider behind he was worried about it!

“I’ve got to finish my last trainer’s module next week then we will probably have a joint license is the plan but having someone with Ralph’s experience is quite useful.

“We’ve got 20 in at the moment with a few more coming in. I’ve got the boys here and Ian is involved with Coup De Pinceau, who we are going to bring back in the Badger Beer. He came eighth in the Scottish Grand National last season and with the ground as it is here we just want to see where we are with him but hopefully he will win it.”

As for winning trainer Smith, who was celebrating his first jumps winner since the 2003-04 campaign, he expects Mascat to come on significantly for the run.

He said: “It is a great start to have our first winner together from our first runner but he was a useful horse on the Flat. We will keep him low key for a while then progress. He will improve for the run but he is accurate with his jumping as we saw today.”

Mafia in charge of handicap chase

Few people left the track in better spirits than owner Peter Boggis, who celebrated his first winner at the course since 1982 after Mr Mafia (9/2) ran out a convincing 16-length winner of the MansionBet Best Odds Guaranteed Handicap Chase under Sean Bowen.

Boggis, who is the father of Olympic event rider Kitty King, said: “My last winner here was 39 years ago was in a chase. The horse was called Phil Norm ridden by Paul Barton and trained by David Gandolfo.

“For a 12 year old giving weight away is unbelievable and he made it look easy. He has won 11 races for me now in four years.

“He is ever hardly out of the frame and he always tries his heart out. I said the day before whatever he does I shall be pleased as he will have done as well as he can.

“He is a star to have. We have him at home in the winter and he is an easy horse to look after he is a real gentleman.”

A return to the track for the 60th Badger Beer Handicap Chase could now be on the cards for the evergreen veteran according to winning trainer Martin Keighley.

He added: “The race maybe fell apart but he seems in the form of his life. He will have one more run then have a break. The Badger Beer could be an option as I expect the ground will stay pretty much the same.”

Jockey Peter Kavanagh hopes he can now “kick on and rattle down” his seven pound claim after securing the fifth winner of his career aboard See The Sea in the MansionBet Faller Insurance Handicap Hurdle.

The 21 year old, who is attached to winning trainer Donald McCain’s yard, made it two wins in eight days aboard the 11/10 favourite who followed up her last time out victory at Ludlow by five lengths in the two-mile prize.

Kavanagh said: “I moved over to Donald’s last November. My old boss Colin Bowe is a good friend of his. I came over for a week’s trial and I loved it so I moved over.

“I’ve been tipping away during the summer getting more experience but now the winter is coming hopefully I can pick up a few more rides. That’s my 10lb claim gone and now I’m down to seven. Hopefully I can now kick on and rattle that down.

“She (See The Sea) just loves it out in front and when she is on her A game is hard to beat. She loves that quick ground.”

Beholden - another winner for Snowden

The switch to a visor appeared to have the desired effect on Beholden (9/2), who returned to winning ways with a front running six-length success under Page Fuller in the MansionBet Bet £10 Get £20 Novices’ Hurdle over two and a half miles.

Jamie Snowden, winning trainer, said: “He hasn’t been the most straightforward and has been a bit of a work in progress.

“His jumping was better with the visor on and Page (Fuller) gave him a lovely ride. His form figures are pretty consistent but I think the application of the visor has definitely helped as has going back up to two and a half miles.”