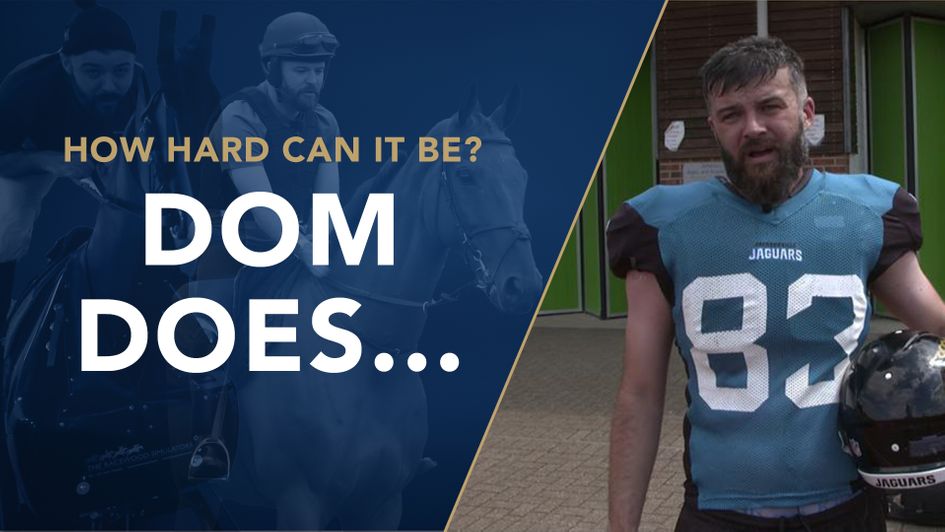 Our Dom tries his hand at a host of professional sports.

WATCH: What does it take to become a professional sports star?

Check out the latest instalment of 'Dom Does...' as our intrepid reporter samples what it's like to sit on a racehorse in Britain's world-famous racing headquarters - Newmarket.

But is being a pro really that hard? What's the difference between me and say, Frankie Dettori? It can't be that hard can it?

To make it to the top in any professional sport you need to be committed, dedicated, highly motivated, extraordinarily fit and healthy and possess incredible natural ability - all of this is a huge problem for me.

Nevertheless, I'll be finding out just how hard the pros work, as I dive head first into the professional arena to take on training sessions with top stars across racing, cricket and the NFL.

I thought they might go easy on me...they did not. As it turns out, it's torture and the difference between me - a mid-thirties, unfit, dad-bod wearing man - and a professional athlete is vast.

Feel free to have a laugh at my expense.

Following an unsuccessful training session at the British Racing School the logical next step would be to go home and never sit on a racehorse, wouldn't it? Wrong!

I was invited down to the yard of Hilal Kobeissi to take my jockey training to the next level and to ride 'Ben', a Newmarket legend and most notably a real horse.

How NOT to ride a real Racehorse!

🏇🏻 Dom Does... Jockey training at The British Racing School

Ever thought jockeys have it easy? Ever slated a jockey? How hard can i possibly be to sit on a horse whilst it does all of the work?

The answer is VERY!

I popped along to The British Racing School with ex-jockey and Union J pop star JJ Hamblett for a harsh lesson on the demands of race riding. Turns out it's intense...and, if you're as unfit as me, embarrassingly hilarious!

Learning to be a racing jockey can't be that hard, can it?

🏈 Dom Does... NFL with Jacksonville Jaguars

Speed, strength, balance, toughness and coordination are all skills that help players succeed in the NFL...

...but what happens if you don't have any of these abilities and have never played the sport before?

I popped down to London to train with the Jacksonville Jaguars to find out what it takes to make it in American football...and it it hurts a lot!

🏏 Dom Does... Bowling with Yorkshire CCC

As much as I respect cricketers, I've always wondered just how hard their job is. After all, don't they just sit in the pavilion or stand around in the outfield for most of the match?

Turns out...it's pretty hard! I went along to Headingley with my Sporting Life colleague and cricket expert Richard Mann for a session with Yorkshire CCC bowling coach Richard Pyrah.

How hard is it to be a bowler in cricket?