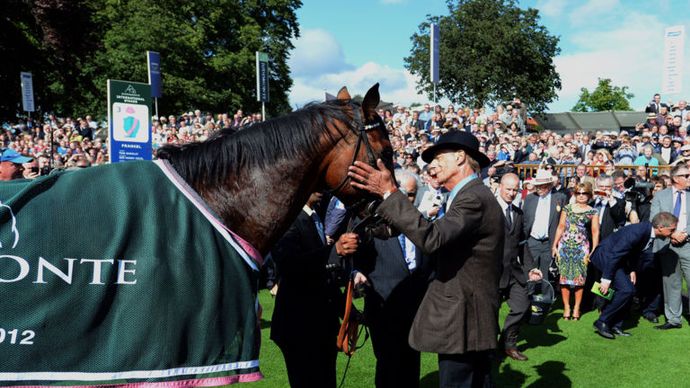 Frankel and Sir Henry Cecil back in 2012

Relive the magical moment Frankel swept past top-class rivals Farhh, St Nicholas Abbey and Twice Over to win the 2012 Juddmonte International at York by seven lengths.

No horse has ever won the Sky Bet Ebor Festival feature race quite like Sir Henry Cecil's colt and here you can watch the memorable event in full - plus all the pre-race Racing TV footage (scroll the video back to the beginning) - while below we also have the report courtesy of Timeform too.

There was a lull in quality in 2011's Juddmonte International but, generally speaking, this is one of the leading British Group 1 races, with an impressive roll of honour; this was as eagerly-anticipated renewal as any, purely because of Frankel's presence as he went beyond 1m for the first time, and he delivered as expected, producing yet another one of the all-time great performances as he blew away a field that included 3 other individual winners at this level; there were a few potential pacemakers in there but it was Windsor Palace that took them along at a strong pace, the main contenders making their moves after 4f out, and it was a good test and a fair race all round.

FRANKEL is of such a quality that it's hard to express, every superlative worthy of use, quite simply a class act and as close to perfection as there ever has been or is likely to be in a racehorse, unbeaten in 13 races now, and, if anything was left to prove, then surely this latest Group 1 success (his ninth in total) proves it, adding that new dimension to his record as he made light of the step up in trip, equally effective as he had been at shorter as he hammered Farhh and new opponent St Nicholas Abbey (both who were close to their best) and, for a remarkable fourth time in his career, produced an exceptional bare form rating in excess of 140; as ever, Frankel took the preliminaries with aplomb, very relaxed both in the paddock and going to post, and it almost looked as easy for him in the race itself, Queally no doubt having the longer trip in mind as he rode him as patiently as he has since his 2-y-o days, cruising along towards the rear before a rapid move towards the stand rail over 3f out, swinging along as he took up the running around 2f out before unleashing his customary burst to go clear approaching the 1f pole, given just one tap of the whip and ridden out under hands and heels, value for winning by even further if anything; there was talk of a tilt at the Arc in the aftermath and, whilst the Champion Stakes is the more likely option having long since been the plan, it's still worth pointing out that on this evidence the even longer trip would be unlikely to be a problem. 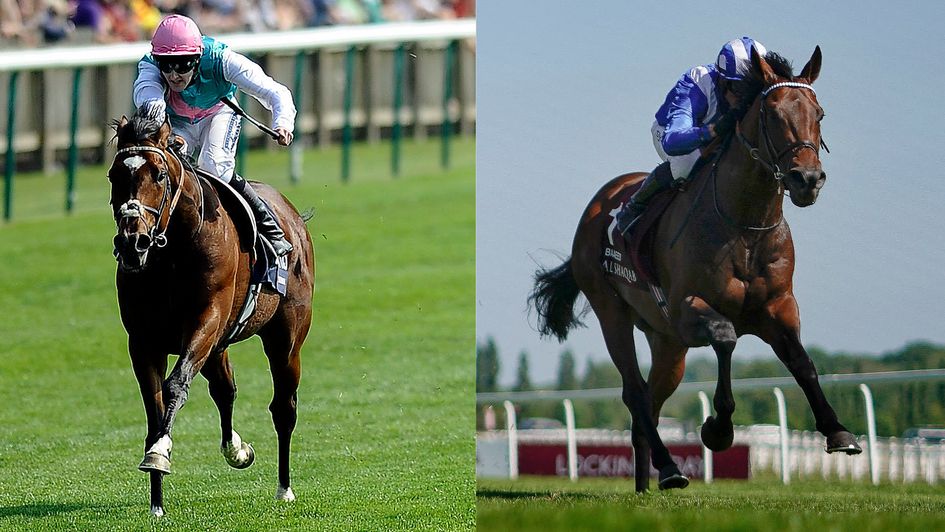 READ: How does Baaeed compare to Frankel?

FARHH should have his day at this level before long, now a fully-proven Group 1 performer, and there's been no shame whatsoever in his well-beaten seconds to Frankel on both starts since pushing Nathaniel close in the Eclipse; mid-field, travelled well, challenged 3f out, unable to go with the winner but stuck to his task well and showed a good attitude to get the better of St Nicholas Abbey in a photo for second; he's entered in the Champion Stakes, but should Frankel go there as expected then he has no chance with him, and perhaps dropping back to 1m again for the QE II is a better option.

ST NICHOLAS ABBEY (IRE) is very consistent in these top races and wasn't far below his best, not in the same league as Frankel but faring about as well as could be expected amongst the rest, closely matched with Farhh and beaten only on the nod by that rival; he raced in mid-field and travelled smoothly, making good progress with most of the chasing pack over 3f out, quickly put in his place by the winner but stuck to his task; he's entered in the Irish Champion Stakes next month and is likely to hold strong claims, as he does in the majority of middle-distance Group 1s.

TWICE OVER wasn't disgraced, essentially finding this too competitive in a much tougher renewal than that he won 12 months ago; in rear, headway down centre of track over 3f out, pushed along soon after and proved one paced; very best days do seem behind him and it's likely to be hard for him to add to his tally of Group 1 wins now.

BULLET TRAIN didn't have quite the same duty as usual as the Ballydoyle pair were pacemakers and ran as well as he ever has in form terms, just not up to the task, but it's evidence that he'll still be competitive in lesser pattern races if given the chance; tracked pace, driven over 2f out, kept on as best he could.

SRI PUTRA has a patchy record overall but won when dropped in grade here on his previous start and just found this too competitive as much as anything; held up, pushed along over 3f out, weakened over 2f out.

PLANTEUR (IRE) is better judged on previous form and should bounce back soon; raced well off the pace, laboured headway over 3f out, badly hampered by weakening Windsor Palace soon after, folded tamely approaching final 1f as if something wasn't right.

ROBIN HOOD (IRE) hasn't run on his own merits recently, in as a pacemaker again.

WINDSOR PALACE (IRE) flying too high at this level; close up, folded tamely around 3f out, eased off.