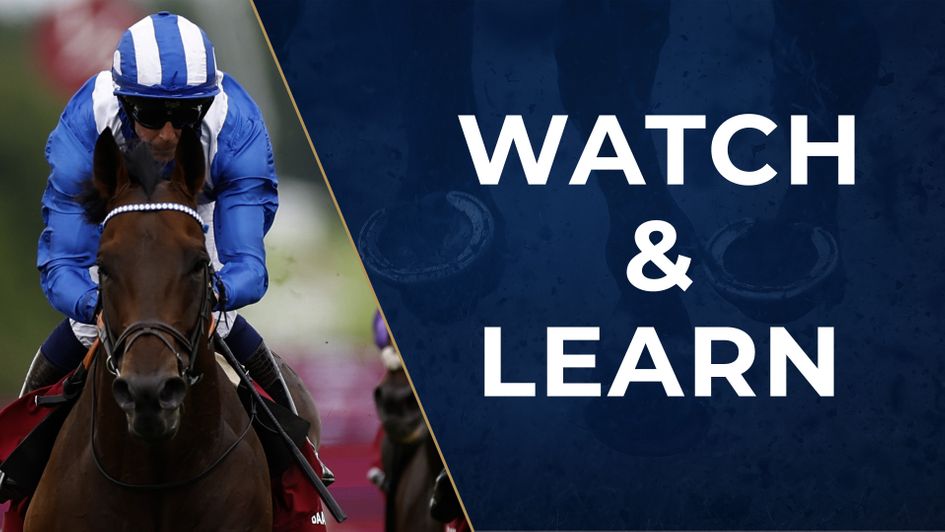 Check out the latest Watch And Learn column

Plenty of fascinating insight from our star analyst on Baaeed, Trueshan, Royal Scotsman and many more who ran at Goodwood last week.

Oddly for a place I’m not much keen on, Goodwood has played an instrumental part in my racing life.

Back in the day when I was ending my stint at primary school, my family always used to take our holidays somewhere on the South Coast during Goodwood week, usually at Seaton in Devon but sometimes at West Wittering or Pagham, and there was always a fight between me, my brother and sister for the right to room with our grandparents who always accompanied us and not with my parents (the grandparents would always bring you a cup of tea in bed while you had to make mum and dad one if you were staying with them).

I used to win that particular battle quite often being the eldest, not because I was averse to making a cup of tea, but because my grandfather always bought a daily paper unlike my father, and I could spend all morning poring over the racecard for Goodwood before heading to the nearby beach.

When I finally got around to visiting the track some 30 years later, I wasn’t as blown away by the location as some are or by the tortuous drive there, but the action on the track remains as incident packed as ever and, though five days long, the Festival doesn’t drag like its parallel cousin in Galway always seems to. 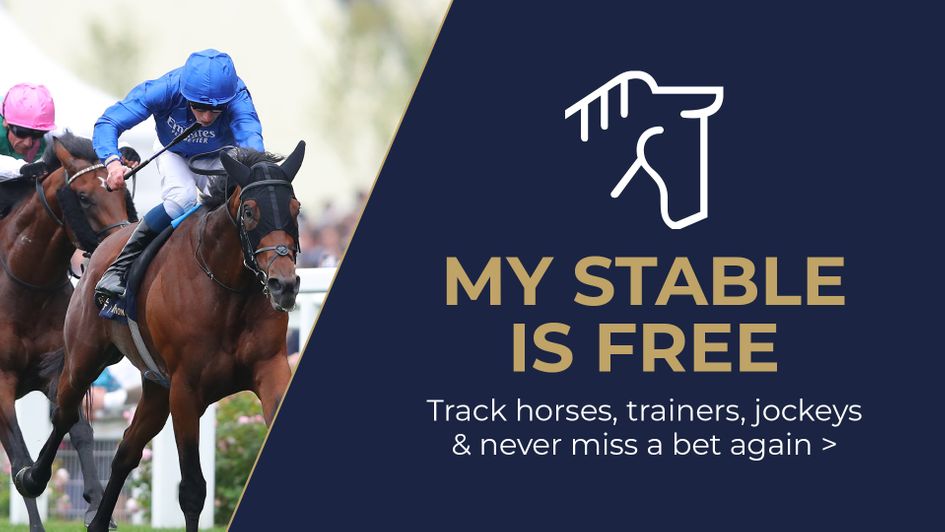 How good was Baaeed in the Sussex Stakes?

Goodwood staged 13 Group races across the five days but overshadowing all the others as ever was the Qatar Sussex Stakes which saw the latest appearance of Baaeed or the ‘new Frankel’ as some are keen to call him.

For those who might need reminding, Frankel was unbeaten in 14 races, won the Sussex Stakes twice by a combined total of ten lengths, won seven of his ten Group 1 races by four lengths or more and is the highest-rated Flat horse (147) in Timeform’s history. He also posted four of the six highest timefigures on the Flat this century, with his two 136 table-topping efforts coming in the 2000 Guineas and the Juddmonte International the following year.

Baaeed is now unbeaten in nine races including five Group 1 contests. The inability to run an outstanding timefigure, or win by wide margins in top company, doesn’t necessarily disqualify a horse as being labelled a ‘great’ (Sea The Stars never won a race by further than two-and-a-half lengths and Giant’s Causeway won five Group 1s on the spin by a combined total of less than two lengths) but as things stand Baaeed has run only one timefigure higher than 116 (126 in the Queen Anne) and his longest winning distance in a Group 1 is three-and-a-quarter lengths. 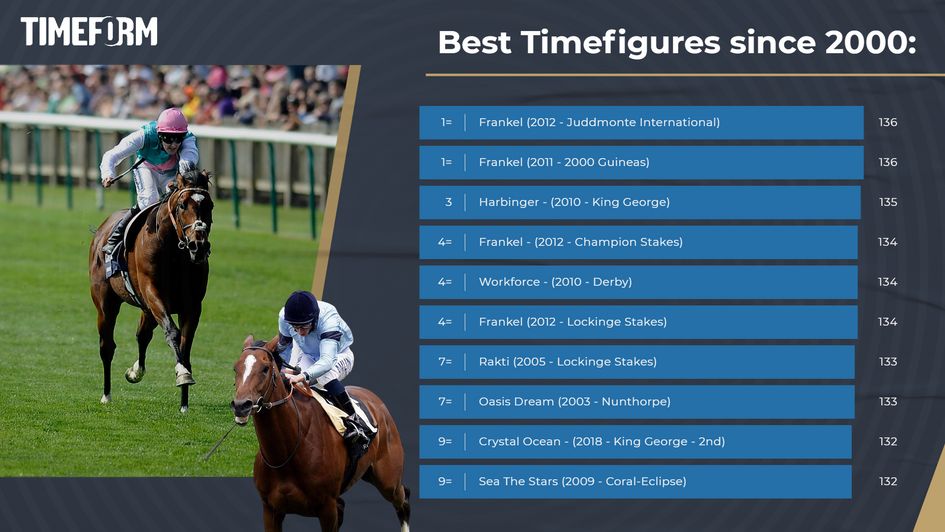 Baaeed’s Sussex Stakes win, in the absence of the Guineas winner Coroebus, came in an ordinary 111 (upgraded to 117 after sectionals are incorporated). Sent off at 1/6, he was always cruising and showed a smart turn of foot to quicken to the front inside the last furlong to put the race to bed very quickly, his task eased slightly by his main rival and 2021 winner Alcohol Free not getting the best of runs.

Baaeed will hopefully show exactly what he is capable of when stepped up to a mile-and-a-quarter next at York, though what turns up to take him on remains to seen with Desert Crown already out of the equation and Vadeni not entered.

It seems his regular jockey Jim Crowley is in no doubt about his merit as he described him in a post-race interview as the best he’s ever sat on. That remark seems to me to have Baa-trashed slightly the qualities of the enigmatic Battaash who might not have been the most consistent but was blindingly fast and, lest Crowley has forgotten, remains the only horse other than Frankel this century to have recorded three timefigures of 130 or more (Sea The Stars is the only other horse to have recorded more than one).

Hopefully, we’ll get to see the ‘real’ Baaeed at York. 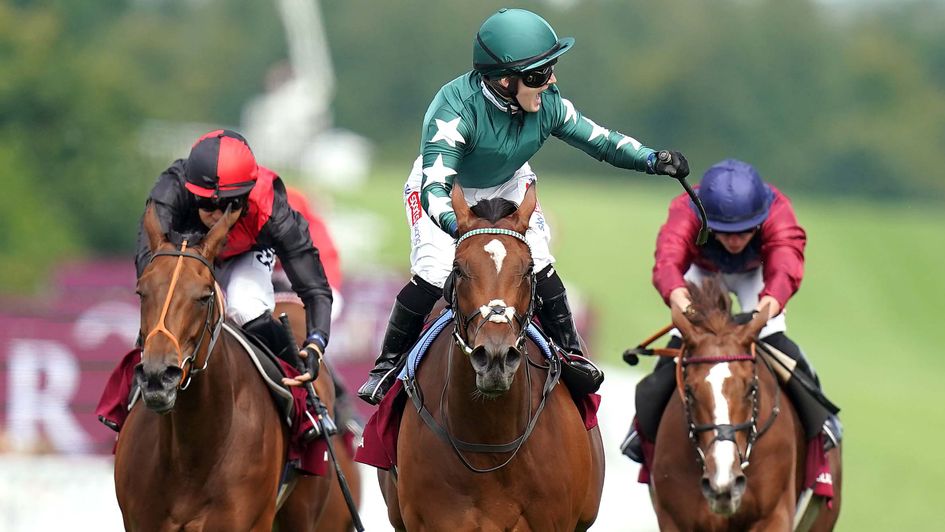 The two other Group 1 races over the week were the Al Shaqab Goodwood Cup and the Qatar Nassau Stakes and had things panned out slightly differently, then in the week that saw the ‘Lionesses’ claim the Euros, Hollie Doyle might have had her own Group 1 double.

Trueshan was finally allowed to take his chance on the opening day after connections had waited for feedback from the first two races, but though the course had been heavily watered and the runners were making a decent print, the ground was unquestionably much faster than ideal or connections had been led to believe.

On top of that, Trueshan was too free in a race that wasn’t run at a strong gallop (winning timefigure just 105) and in which Ryan Moore was seen to good effect on the prominently-ridden winner Kyprios, all of which added up to a substandard performance from Trueshan, though whether he’s quite as good as his huge weight concession in the Northumberland Plate makes him look remains to be seen.

Nashwa took her form up a level when winning the Nassau. Neither her winning timefigure (99) nor her upgrade (8, taking her overall time rating to 107) was anything special, and the form could be questioned with Lilac Road – who ran the quickest final furlong according to Course Track – finding trouble and form pick Dreamloper running well below her best, but similar could be said about her Prix de Diane victory where she had the benefit of a good positional advantage unlike most of her most dangerous opponents. A mile-and-a-quarter looks her trip for sure.

The highest timefigure recorded at Goodwood last week (117) came not from a winner but from one of the placed horses, Deauville Legend, who was beaten a length-and-three quarters by New London in the John Pearce Gordon Stakes but emerges the better horse on time on account of the 3lb penalty he carried.

That was an attritional race with the final furlong being the slowest all day except for the concluding two-year-old maiden, so perhaps the slight drop in trip didn’t count against Deauville Legend, but there must be a good chance he’ll improve again as he steps back up in trip and he would have been a leading contender for the Cazoo St Leger if he hadn’t already been gelded (his full sister Sea La Rosa won the Lillie Langtry over a mile and three quarters on the final day of the meeting and will no doubt take in the ‘fillies St Leger, the Park Hill’ at the same meeting).

As it is, New London will likely ‘represent’ him at Doncaster. He had been beaten at 4/11 by Changingofthegurad in the Chester Vase back in May but wouldn’t be the first horse to have been beaten round that idiosyncratic track before coming out and showing far superior form elsewhere, and given he is out of a half-sister to the St Leger winner Masked Marvel it’s perhaps no surprise he heads the betting for the final Classic which unbelievably is only six weeks away. Third-placed Hoo Ya Mal couldn’t reproduce his Derby form in a first-time tongue tie for new trainer George Boughey but wasn’t discredited.

The only other winning timefigure higher than 108 came from Sandrine (110) in the Group 2 World Pool Lennox Stakes, though the three that followed her home all posted higher figures once the weight-for-age allowance is accounted for. The runner-up Kinross, who had won the race in 2021, looked unlucky, coming from further back than the others in the frame and running the fastest last furlong according to Course Track, but getting the breaks at the right time is what makes Goodwood what it is and champion all-weather rider David Probert always had her in the right position on her first start at seven furlongs. 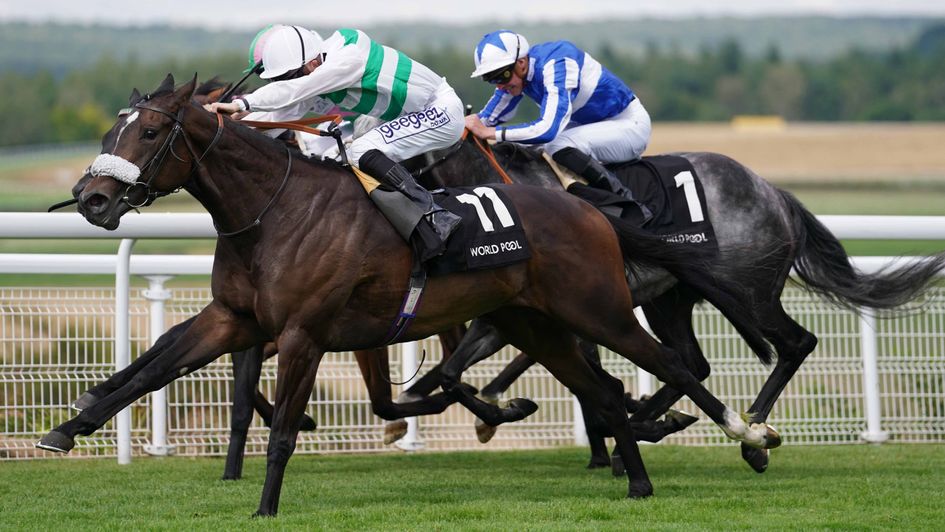 Best of the Goodwood two-year-olds

Royal Scotsman posted the best timefigure (103) among the two-year-olds with a convincing win in the Richmond Stakes. Heavily supported beforehand, the Coventry Stakes third broke the two-year-old course record, improving his Royal Ascot timefigure slightly in the process and leaving the impression there’s more to come, though the third Chateau (fastest last furlong according to Course Track) will likely give him a closer race next time.

The Platinum Queen looked a young sprinter going places in the British EBF Alice Kepel Fillies' Conditions Stakes, posting a 102 on her way to a four-length win that saw her pass the post in a time a length or so faster than Trillium managed in the Markel Molecomb Stakes, running a faster final furlong to boot, though the turn of foot that Trillium showed was very impressive as evidenced by her running the last furlong 0.42 seconds faster than the next-fastest horse according to Course Track.

Marbaan won the Japan Racing Association Vintage Stakes with a strong finish to run down Chesham Stakes winner Holloway Boy in a 100 timefigure. The final furlong was easily the slowest on the day, which reflects well on third-placed Mysterious Night who got racing too far out and emerges best once sectional upgrades are taken into account.

Warren Point and Commanche Falls shared the distinction of posting the biggest winning timefigure of the week (108) in a handicap. The former registered his after coming clear with his stablemate Blue Trail in another result that points to Charlie Appleby’s three-year-olds having been profitable to follow in handicaps at the big Festivals all year.

Commanche Falls made a bit of history by becoming the first horse to win back-to-back Coral Stewards’ Cups since 1968, though the two that chased him home both finished faster and the luckless sixth Great Ambassador came home fastest of those drawn low. Super Superjack, Soulcombe, Surely Not and Crystal Caprice were four others that caught the eye for one reason or another on sectionals and are worth following in their next few starts.

The last-named might only have won a handicap off a BHA mark of 87 but the manner in which she quickened having travelled well was extremely impressive, and I’ve no doubt she’s a Group-class filly as her pedigree suggests. 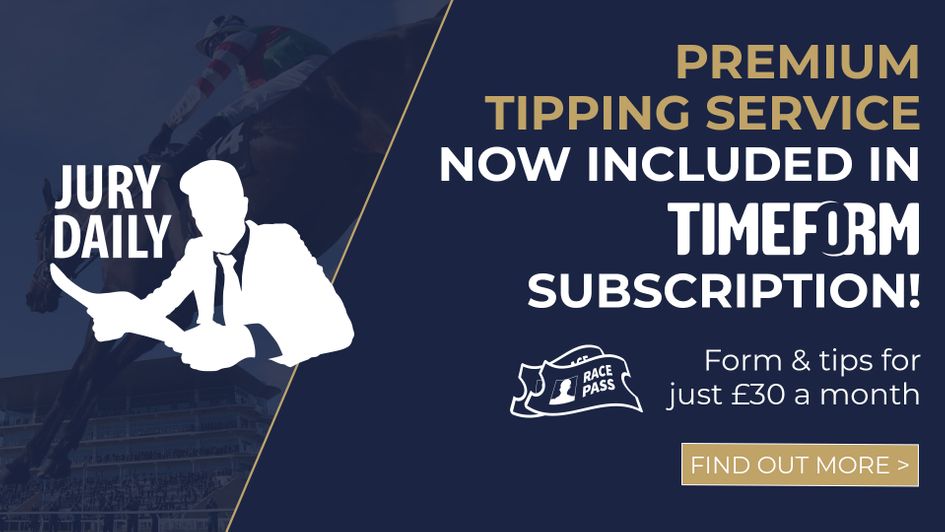