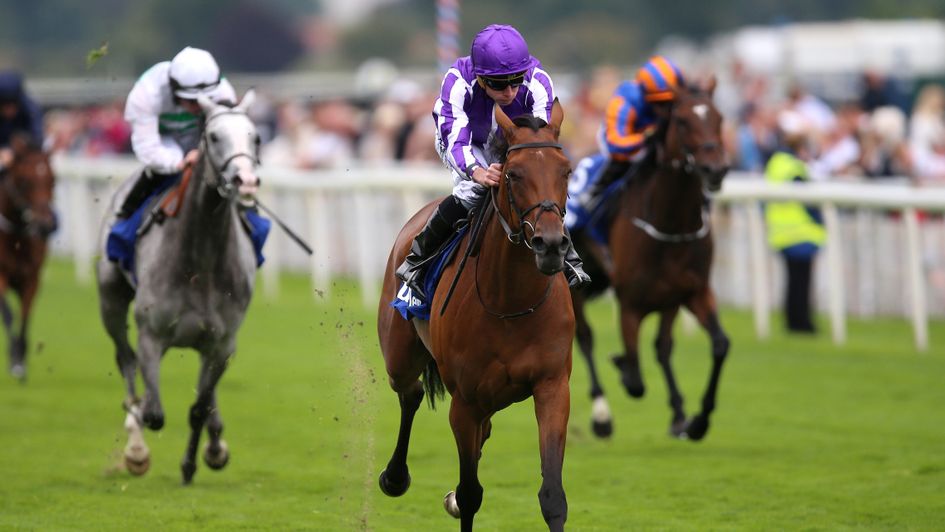 Snowfall is out on her own at York

Our man in France Jason Kiely has all the details ahead of Arc trials day at ParisLongchamp as Snowfall puts her lofty reputation on the line again.

On what has already been a turbulent week for all things Arc related, the pressure surrounding Europe’s richest horserace is cranked up another notch with Sunday’s Qatar Arc Trials at ParisLongchamp – a huge 10-race card worth over €1.2 million in prizemoney.

The Group One Prix Vermeille is the feature on the card and boasts ante-post Arc favourite Snowfall amongst the seven-strong field. Complementing the feature are a brace of Group Two contests - the Prix Foy and the Prix Niel.

These three races are sure to produce plenty of pointers regarding the first Sunday in October and our man in France Jason Kiely highlights some of the main players across the afternoon's action.

It has been a year of 'French firsts' for trainer Aidan O’Brien, who in 2021 has already landed inaugural successes in both the Prix du Jockey Club and the Prix de Diane, with St Mark's Basilica and Joan Of Arc respectively. The Ballydoyle maestro has counted 52 top-flight victories in France and should notch up yet another ‘first’ on Sunday as he saddles red-hot favourite SNOWFALL for the Group One Prix Vermeille (14.55).

A revelation since stepping up in distance in 2021, Snowfall remains unbeaten this season and chases a fourth successive Group One in Sunday’s showpiece, following sensational wins in the Epsom, Irish, and Yorkshire Oaks.

The daughter of Deep Impact demolished her rivals by a combined total of 28 lengths for those three Group One wins and looks set to produce another exhibition. Considering she has handled the undulations and complexities of racecourses such as Epsom and the Curragh, Snowfall should have no problem handling her first outing on French soil and can seal the whopping winning prize of €342,840.

A general 9/4 favourite for next month’s Prix de l’Arc de Triomphe, Snowfall faces six inferior rivals in the Vermeille, which should provide her with a perfect introduction to the piste at ParisLongchamp.

Although she is fairly malleable in terms of running position, the inclusion of Snowfall’s stablemate, the front-running La Joconde, should ensure that there are no tactical issues and that Frankie Dettori can get a good lead into the 2,400m contest, before turning on her trademark sprint finish once again.

Although she may be the ante-post favourite for the Arc, if connections feel that Snowfall can emulate her half-sister Found’s success in the race, then they will have to supplement her for €120,000 on September 29 even if she wins the Prix Vermeille - the last filly to do the Vermeille/Arc double was the mighty Treve in 2013.

Snowfall sidestepped the French Oaks (or the Prix de Diane) in preference of Irish equivalent, but fillies JOAN OF ARC, PHILOMENE and BURGARITA filled the first three places in the Chantilly Group One - in that order. The trio may have to settle for a runner-up spot in the Vermeille and considering there was so little between them at Chantilly, every inch will be crucial on Sunday.

A stablemate of Snowfall, Joan Of Arc had the run of the race that day but proved tough under jockey Ioritz Mendizabal (rides again Sunday). 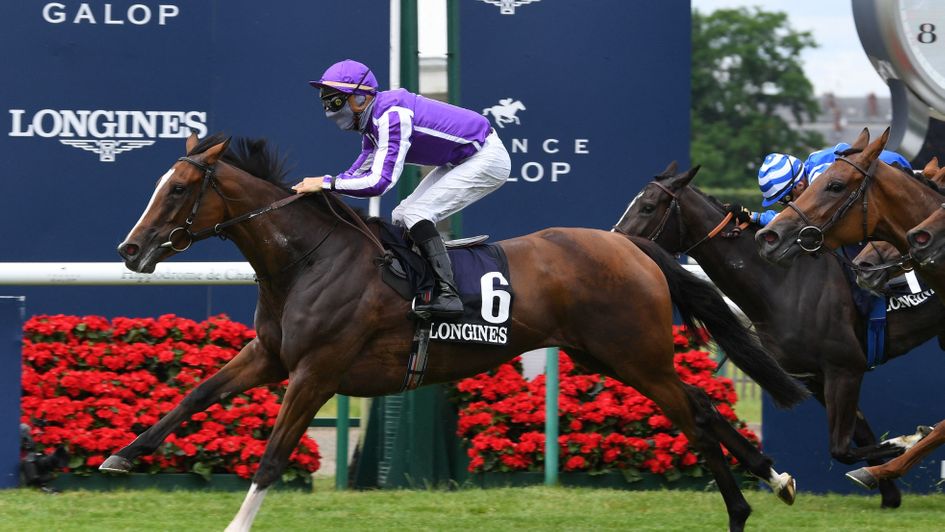 Joan Of Arc wins at Chantilly

She has since backed up the form and finished only two lengths behind Lady Bowthorpe in what looked like a stronger race in the Nassau back in July. Freshened up since, Joan Of Arc could be the one to chase home her stablemate.

The Andre Fabre-trained pair of Philomene and Burgarita lacked some inexperience in the Prix de Diane and both stayed on from off the pace. Both dropped in class on their next starts, both Philomene and Burgarita failed to score although it was later reported that the Fabre horses were unwell for the major portion of the summer.

With the yard back on an even keel and considering Fabre’s excellent record in this race, it wouldn't be a shock to see either one of the pair getting involved.

BALLET CAN DANCE ON PARIS TURF

Although he flopped in the Epsom Derby, BOLSHOI BALLET made an impressive return to the winning enclosure when landing the Group One Belmont Derby and the globetrotting three-year-old should be able to capitalize back up in distance for the Group Two Qatar Prix Niel (13.33).

It could be a lucrative afternoon for the O’Brien/Dettori partnership and on paper Bolshoi Ballet looks clear of his five rivals.

The son of Galileo could be advantaged by the uneasy weather conditions announced across Paris this weekend and softer going would only enhance the colt’s chances even further.

Reported to have not handled the drop back down in trip on firm ground when on fourth at Saratoga last month, Bolshoi Ballet has often been forced to cut out his own running and considering the low number of runners, he should be able to dictate matters at the head of the field if needed.

Jean-Claude Rouget’s Sottsass took this race en route to landing the Arc last season and although Bolshoi Ballet remains entered in the big one, he needs to confirm his staying powers if he is to book a return ticket in three weeks.

The biggest threat to Bolshoi Ballet could come from the Fabrice Vermeulen-trained PRETTY TIGER. The son of Sea The Moon has been progressive all season and if his lacklustre performance in the Prix Du Jockey Club can be excused, then he has not too much to find with Bolshoi Ballet and is ridden by the in-form Christophe Soumillion.

SKALLETI CAN SCORE ON WAY TO DOLLAR

The unfortunate absence of Wonderful Tonight leaves a rather clear pathway for the Jerome Reynier-trained SKALLETI in the Group Two Prix Foy (15.30).

The six-year-old has been electric form all season and is down in class for this contest, having landed two Group One races on his two most recent starts.

With the conditions of the Prix Foy meaning that the son of Kendargent does not receive any penalties off the back of those two Group One wins and as a result of that, he is a clear pick on the figures. Although unraced at over 2,000m Skalleti has proven incredibly strong through the last two furlongs of his races and should be able to contend with his first attempt at the 2,400m distance in the Foy. 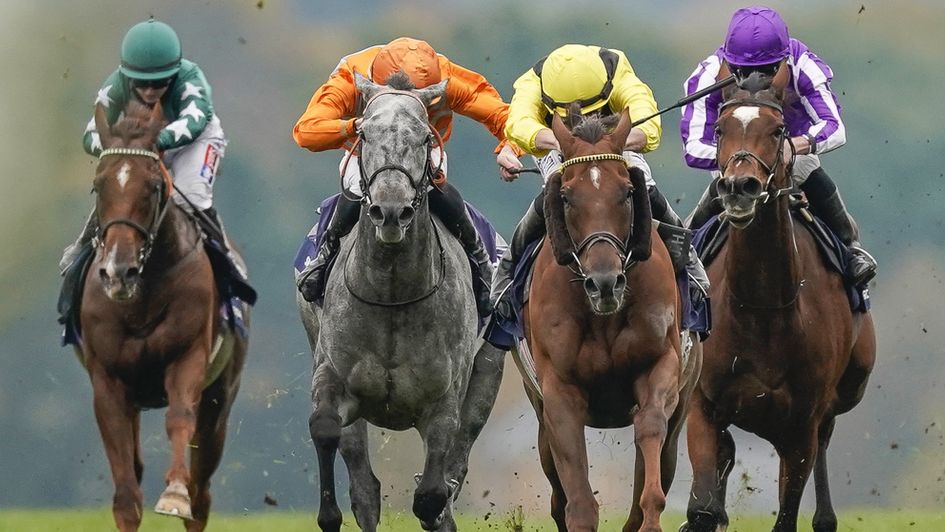 Skalleti (the grey) runs at Saint-Cloud

During the 2019 season, Arc winner Waldgeist successfully landed the Prix Foy before taking the €5,000,000 race. However, even if successful in this year’s event Skalleti will not be privileged to the opportunity of copying Waldgeist’s superb double. The fact that Jerome Reynier’s stable star has been castrated automatically rules him out of the Arc, although he does hold an entry in the Group One Prix Dollar on the same weekend.

Already a winner of the race on two occasions (2020 & 2019) Skalleti could enter the record book if he were to land the race again.

There are plenty of outsiders to note in the Prix Foy and particular attention should be shown to the Group One winner BROOME, the progressive IRISENE and also Japanese runner DEEP BOND, who is having a prep run for the Arc and according to connections, will be looked after with the big race in mind.