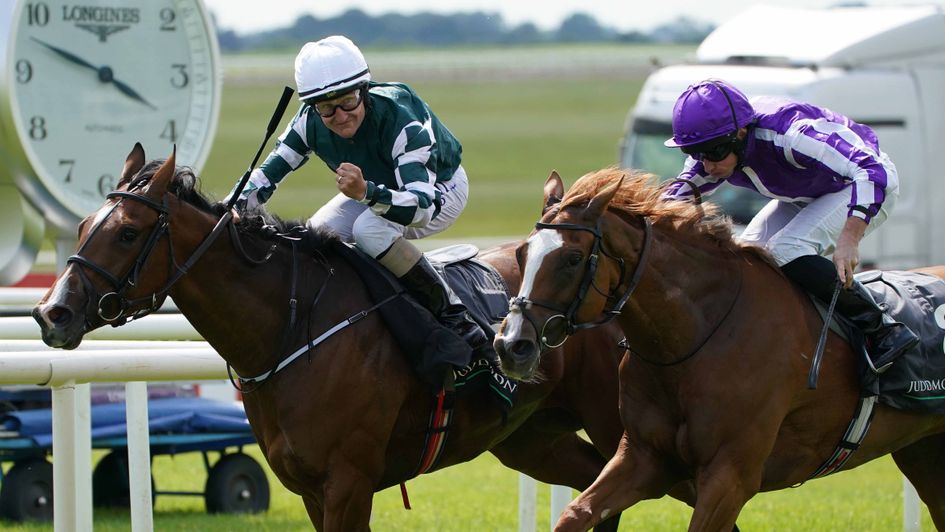 John Ingles on why Toy is a rare runner in a German classic for Ballydoyle and what a win would mean for her dam You'resothrilling.

Germany’s classics rarely figure in Coolmore’s plans, though they have had the odd runner in the Deutsches Derby at Hamburg in the past. But Aidan O’Brien is sending Toy and Ryan Moore on a mission to Dusseldorf on Sunday for the Preis der Diana, the German Oaks. The prize money is excellent, with the race worth around £250,000 to the winner, but there’s almost certainly more to this rare raid than the prospect of a big pay-day.

Toy is out You’resothrilling who was a useful two-year-old for the same connections, winning a Group 3 at Naas and the Cherry Hinton Stakes (nowadays the Duchess of Cambridge) at Newmarket as well as finishing runner-up in the Albany Stakes at Royal Ascot in between. Although beaten both times, she improved at three with smart efforts in both the Matron Stakes and Prix de l’Opera.

Whatever she did on the track herself, You’resothrilling was always going to be a first-rate broodmare prospect as a full sister to connections’ top-class colt Giant’s Causeway who enjoyed a memorable three-year-old season for Ballydoyle, winning five consecutive Group 1 contests, all by less than a length, and ending his racing career with a narrow defeat in the Breeders’ Cup Classic. Giant’s Causeway went on to be a top stallion as well, becoming champion sire in North America on three occasions.

But his sister is making a name for herself in her own right thanks to her own outstanding record as a broodmare. When she finished second in the Irish Oaks last month – form which makes her the one to beat at Dusseldorf, incidentally - Toy became You’resothrilling’s eighth foal from as many runners to earn some black type and to achieve a Timeform rating of in excess of 110 (she’s rated 112).

All of You’resothrilling's foals are by Galileo and four of them have won at the highest level which is why Toy’s run in Germany has extra significance. Were her daughter to win, You’resothrilling would become only the second broodmare in the Northern Hemisphere to have produced five Group/Grade 1 winners. That’s a record currently held by Juddmonte’s matriarch Hasili who achieved it with Banks Hill, Heat Haze, Intercontinental, Cacique and Champs Elysees.

Among Toy’s siblings, her sister Happily gained her Group 1 wins at two in the Moyglare Stud Stakes and Prix Jean-Luc Lagardere. She later made the frame in the 1000 Guineas, Irish 1000 Guineas and Prix de Diane but Toy could also become her dam’s fourth European classic winner if successful in the German Oaks.

Another of her sisters, You’resothrilling’s first foal Marvellous, won the Irish 1000 Guineas in 2014. A year later, brother Gleneagles won the 2000 Guineas and Irish 2000 Guineas as well as emulating his ‘uncle’ Giant’s Causeway by winning the St James’s Palace Stakes. Vatican City went close to winning another Irish 2000 Guineas for his dam when runner-up in 2020 and last year Joan of Arc went closer still in the Irish 1000 Guineas, beaten a short head by stablemate Empress Josephine, before becoming You’resothrilling’s third classic winner when winning the French Oaks, the Prix de Diane.

Toy herself ran in the Prix de Diane but fared no better there than she had done in the French 1000 Guineas, the Poule d’Essai des Pouliches, the time before. But she showed plenty of improvement when going down by half a length to Magical Lagoon at the Curragh last time when becoming her dam’s sixth foal to have either won, or been placed in, a European classic. That’s a remarkable record, but it could get even better for You’resothrilling thanks to Toy on Sunday.