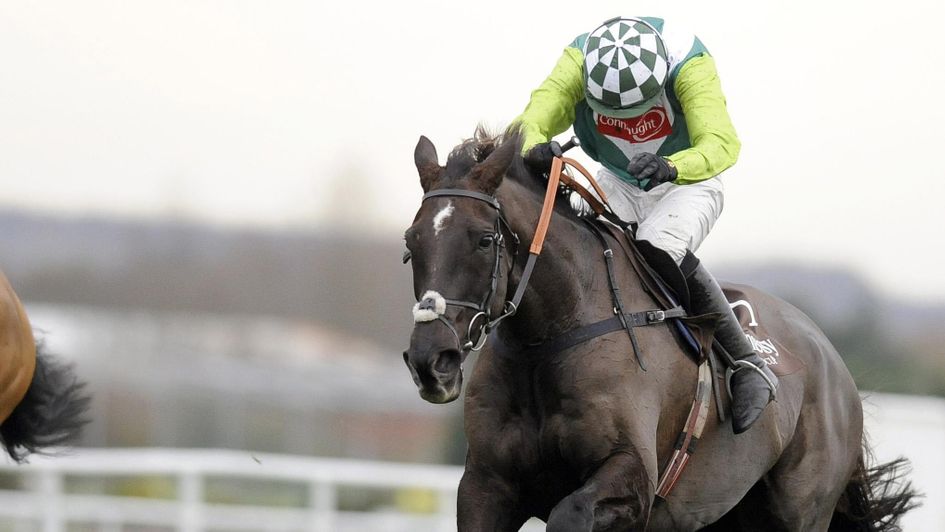 Denman was all heart at Newbury

Timeform: The Great Essays - DENMAN | "He is in very good company then..."

With the newly-named Coral Gold Cup taking place at Newbury on Saturday, we revisit an extract from Denman's essay in Timeform's Chasers & Hurdlers 2009-10 which focuses on his second Hennessy success.

As when successful two years earlier, Denman carried top weight of 11-12 at Newbury, though this time he was competing from a BHA mark of 174, compared to 161 in 2007 when giving 19lb and an eleven-length beating to the latest season's Welsh National winner Dream Alliance. As a result of his campaign in 2008/9, Denman's BHA mark had come down from the 182 (3lb higher than Kauto Star at the time) he had been allocated in the Anglo-Irish Classifications of 2007/8, though he still had to give a minimum of 12lb to his eighteen rivals, six of whom were out of the handicap.

Despite his troubles in the interim, and the fact that the Nicholls stable fielded another strong candidate, What A Friend (carrying 10-4), Denman was sent off favourite at 11/4.

Denman had surrendered the position of market leader to Snowy Morning, also in the latest Hennessy field, in the 2007 renewal. Apart from What A Friend, another second season chaser Killyglen and the Gold Cup seventh Barbers Shop were Denman's closest rivals according to the betting, while the remainder of the field included another former Hennessy winner, State of Play, the Grand National winner Mon Mome, and the 2006 Cheltenham Gold Cup winner War of Attrition, no longer the force of old and contesting his first handicap, on 10-6.

Whilst lacking the dominance of his 2007 victory, when he had the race won from a long way out in much more testing conditions, Denman's second success in the Hennessy again owed plenty to his assured jumping and resolute galloping.

His resolution served him well at the finish but, back at the start, he had needed plenty of rousting by Ruby Walsh to get away on terms on the outside of the field and take up a prominent pitch jumping the first. Denman is, by all accounts, prone to laziness at home and, though he has never failed to jump off in a race, no chances are taken on racedays when he is accompanied at the start by the trainer's assistant.

Once under way in the latest Hennessy, Denman soon settled on the heels of the leaders Joe Lively and Niche Market, briefly taking the lead over the water passing the stands for the first time. Going down the back straight on the second circuit, Denman asserted and went on again, for good this time.

A bold jump at the cross fence by Denman put daylight between himself and Barbers Shop, who had emerged as his closest pursuer, and while the latter closed again seemingly going well on Denman's inner four out (the first in the straight), another fine leap from Denman saw him off.

Niche Market was still in contention at that stage too, but it was stable-companion What A Friend who was to prove the only real threat. Denman briefly looked to have a fight on his hands going to the last when What A Friend drew upsides under Sam Thomas (who had partnered Denman to victory in 2007), but, with his stable-companion hanging fire, Denman showed much the greater resolution when driven out on the run-in to win by three and a half lengths. There was a similar gap back to Irish National winner Niche Market who, racing from 3lb out of the weights, pipped Barbers Shop for third, with the others finishing at long intervals behind those in the frame.

Six of the last seven Hennessy Gold Cups have now been won by horses carrying 11-0 or more; Trabolgan also carried 11-12 in 2005 though, with him, that corresponded to a BHA mark of only 151. Denman's two victories are the best performances in the race since Burrough Hill Lad's win under 12-0 in 1984, that horse the last Hennessy winner before Denman to have won a Cheltenham Gold Cup as well.

Bregawn went on to win at Cheltenham in the spring, but all the other horses to have won both races achieved the feat early in the Hennessy's history.

Between them, the Cheltenham Gold Cup winners Mandarin, Kerstin, Mill House and Arkle won six of the first nine runnings of the Hennessy Gold Cup after the race was inaugurated in 1957. Mill House, who won under 12-0 in 1963 (with Arkle third under 11-9), and Arkle, who defied 12-7 in the next two runnings (Mill House fourth under 12-4 in 1964) are the only other horses, apart from Burrough Hill Lad, to have carried more weight to victory in a Hennessy than Denman. He is in very good company then, joining an exclusive club along with Mandarin and Arkle as the only dual winners of the Hennessy.

The exploits of Arkle crop up regularly in these pages. He ran in four consecutive Hennessy Gold Cups, slipping on landing at the last ditch in Mill House's year and then narrowly failing to give 35lb to the subsequent Cheltenham Gold Cup runner-up Stalbridge Colonist when attempting his hat-trick in 1966 (1969 Gold Cup winner What A Myth, receiving 33lb, was in third).

The other dual Hennessy winner Mandarin, whose era just preceded that of his stable-companion Mill House and Arkle, compiled a tremendous record in his own right in the top staying handicaps and weight-for-age contests over fences, establishing a prize money record over jumps which stood until it was broken by Arkle.

Mandarin is probably best remembered for his win in the 1962 Grand Steeple-Chase de Paris, a heroic performance from both the horse and his rider. Not only did Mandarin's bit snap early in the race, leaving Fred Winter with no steering for the best part of three and a half miles around the twisting course, but Mandarin also broke down before the final straight.

Winter was as exhausted as his mount, largely as a result of having to waste to do 9-10 for a race later on the Auteuil card, riding at more than half a stone lower than his usual minimum. Mandarin was eleven years old at the time of his win in the Grand Steeple-Chase (he had also been runner-up in the same race three years earlier), becoming trainer Fulke Walwyn's hack after he was retired. His win at Auteuil also set the seal on the most successful season of his entire career: he went unbeaten in five races in 1961/2, winning his second Hennessy Gold Cup and landing the Cheltenham Gold Cup, the last-named at the third attempt. 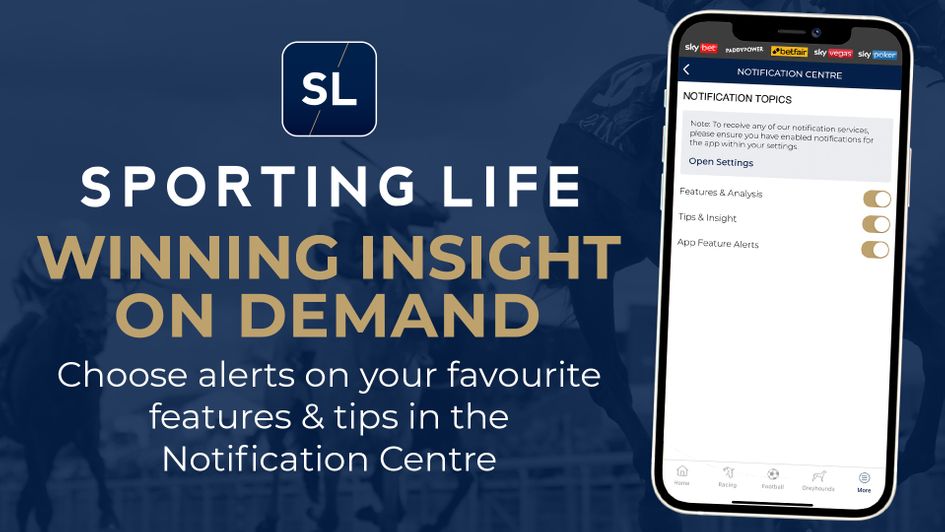 Like Denman, Mandarin won his first Hennessy as a second-season chaser, having won the Broadway Novices' Chase (which had become the Royal & SunAlliance when Denman won it) at Cheltenham by twenty-five lengths the previous March.

The first three Hennessy Gold Cups were also run at Cheltenham, before the race moved permanently to Newbury in 1960. Mandarin's victory in the inaugural renewal (under 11-0, in receipt of 16lb from the runner-up Linwell, winner of that year's Cheltenham Gold Cup) was a fitting one given that he was owned by Madame Peggy Hennessy from the family of the sponsoring firm.

With a stone more on his back, Mandarin started odds on to win the Hennessy again the following year but managed only a remote fifth and missed the race in the next two years before returning in 1961 to win at Newbury under 11-5. Mandarin's first appearance in the Cheltenham Gold Cup in 1958 was inauspicious, unseating at the eighth from home and, in the process, effectively bringing down old rival Linwell, the pair had been sent off first and second favourites.

Mandarin fared better in his second attempt three years later, finishing third to Saffron Tartan and the previous year's winner Pas Seul, before perseverance paid off in 1962 with a length victory from Fortria.

Also on Mandarin's list of big-race wins was the King George VI Chase at Kempton which he won a month after his first Hennessy and again two years later. The King George wasn't Mandarin's luckiest race, however, as he sustained a fracture to a hind leg when third in the 1958 renewal which kept him out of that season's Gold Cup, and then developed tendon trouble after winning a gruelling contest in 1959, the resultant problems keeping him off the course for the best part of a year.

One big race that did elude Mandarin, though not for the want of trying, was the Whitbread Gold Cup at Sandown. He contested the race four times, finishing runner-up in his first three attempts, beginning with the inaugural contest when still a novice in 1957 (the Whitbread predated the Hennessy by only a matter of months as the first big sponsored handicap chase). Beaten a neck by Much Obliged on that occasion, Mandarin went closer still two years later, going down by a short head to Done Up, conceding 12lb to the winner.

Arguably Mandarin's best effort in the Whitbread, though, came in 1958 when starting the 9/2 favourite, despite carrying top weight of 12-0 against no fewer than thirty rivals, as a result of having won both his starts in handicaps under big weights since his mishap in the Gold Cup.

On this occasion, it was stable-companion Taxidermist (who beat him again in the Hennessy later in the year) who proved too good, but Mandarin had the Gold Cup winner Kerstin back in third (giving her 4lb) and Much Obliged in fourth.

Mandarin did get some reward for his near-misses at Sandown. After his third defeat, Whitbread's chairman Colonel Bill Whitbread arranged for Mandarin to receive two bottles of the company's Mackeson stout every day for the rest of his life from a pub in Lambourn; Mandarin had long been fussy when it came to food and apparently needed a sweetener in his meals to get him to eat up.