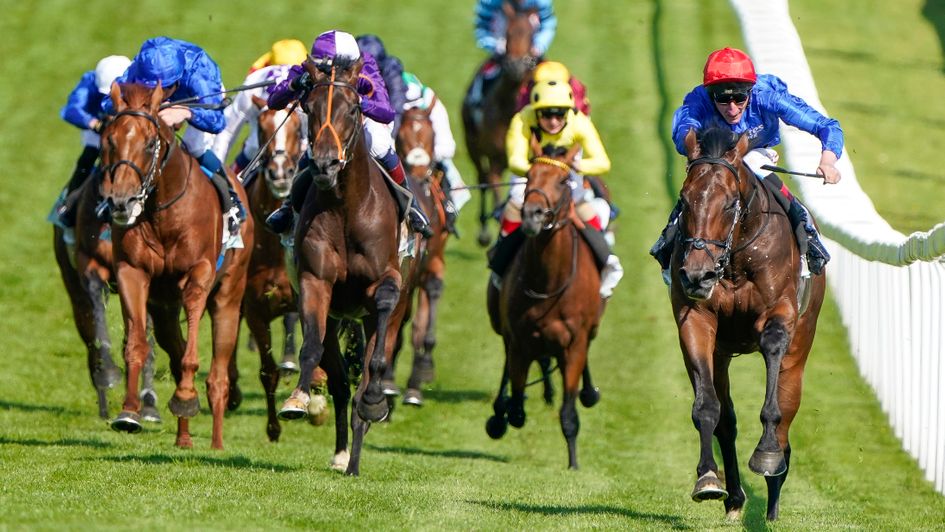 Adayar is in control of the Cazoo Derby

Timeform's report on the 2021 Derby at Epsom won by Adayar

Read Timeform's report on the 2021 Derby. This is a free sample but reports on every race in Britain and Ireland are available to Race Passes subscribers.

The late withdrawal of Mohaafeth, due to the ground, left the second smallest field for the Derby this century, in part due to Aidan O'Brien saddling just the one runner, the short-priced favourite Bolshoi Ballet, winner of the Derrinstown Stud Trial, though Alenqueur and Lone Eagle were among notable British-trained absentees and French stables were unrepresented, as they had been in the first three British classics as well.

For the fourth time in five years the race fell to one at a double-figure price, though Adayar had suggested at Sandown that he had a really good effort in him and his performance, though not the easiest to weigh up, looks about as good as any in the race since Golden Horn, that the last winner for whom the Derby was a launchpad for a season of further high achievement, the race needing another of similar stature.

The issues with the form are the presence in second of a maiden, seemingly much improved, and the underperformance of so many of the main contenders - the favourite was reportedly very sore afterwards, while several of the others either did not handle the track or just ran lacklustre races. The pace was sound, the winner soon in a position just behind the leader, his success from stall 1 leaving a vacancy for a hoodoo.

Adayar gave his sire Frankel a Derby winner to go with successes for his progeny previously in the Oaks and St Leger, and his ability to pass on the stamina he might himself have been expected to show is beyond question.

ADAYAR (IRE) beaten into second at Sandown and Lingfield, went one better in the best possible fashion, well suited by the demands of the race, showing more pace than might have been expected to get a good position after fluffing the start, then the speed to hold it before his stamina came into play, all under a fine ground-saving ride, never leaving the inside rail; awkward start, tracked pace and travelled well, squeezed through against rail to lead over 2f out, in command soon after, stayed on strongly final 1f, impressive; he's likely to stay further, the St Leger an obvious option for later in the year, though the Irish Derby and King George could well be targets in the meantime.

MOJO STAR (IRE) upped in trip, looked to have loads on after being beaten in a novice and a maiden, but he seemed to excel himself, clear of the rest, plenty to like about the way he moved forward off the turn, the trip clearly suiting him well; held up, good headway 3f out, took second 2f out, no impression on winner; connections will presumably be tempted to continue to aim high with him.

HURRICANE LANE (IRE) ran respectably, stepped up in trip (should stay this far), though he didn't really handle the track and might have done better elsewhere, worth another crack at this level, perhaps in the Irish Derby, time still for him to build on his quite taking Dante win; handy, pushed along straight, wandered, stayed on from 2f out, not quicken inside final 1f.

MAC SWINEY (IRE) wasn't disgraced over 2f longer trip, though he may need really soft ground to show to maximum advantage, looking rather laboured on this drying surface when asked to pick up; waited with, effort entering straight, headway 3f out, not quicken 2f out.

THIRD REALM had beaten the winner convincingly at Lingfield, but he may need proper soft ground to be seen to advantage and he just didn't fire in the same way, oddly, given how he handled Lingfield, looking ill at ease rounding Tattenham Corner; waited with, shaken up home turn, not quicken early in straight, plugged on final 1f.

ONE RULER (IRE) upped markedly in trip, was below form, just turning in a lacklustre effort, coupled with not really handling the track, whether he has the required stamina (a far from certain stayer on pedigree) a question for another day; raced off the pace, ridden straight, wandered, not quicken, hung left over 2f out, plugged on final 1f.

BOLSHOI BALLET (IRE) well backed, was well held over 2f longer trip, dropping away tamely after being in a similar position to the winner at Tattenham Corner, his effort best excused as he reportedly sustained a cut and was very sore afterwards; tracked pace, travelled well, shaken up 3f out, found little; given the style of his win at Leopardstown, a performance also backed up by the timefigure, he is clearly entitled to another chance.

JOHN LEEPER (IRE) upped in trip, is probably best given a pass for this, short on experience for a race of this magnitude, enough in his brief forward move (when forced wide) on the home turn to think he'll still do better another day, looked after once he was beaten; in rear, took keen hold, brief headway out wide home turn, ridden over 3f out, weakened over 2f out, not persevered with once held; he's bred to stay at least this far.

GEAR UP (IRE) ought to be suited by this trip but ran well below form; led until over 2f out, soon beaten.

Click here to see Timeform ratings for the Derby