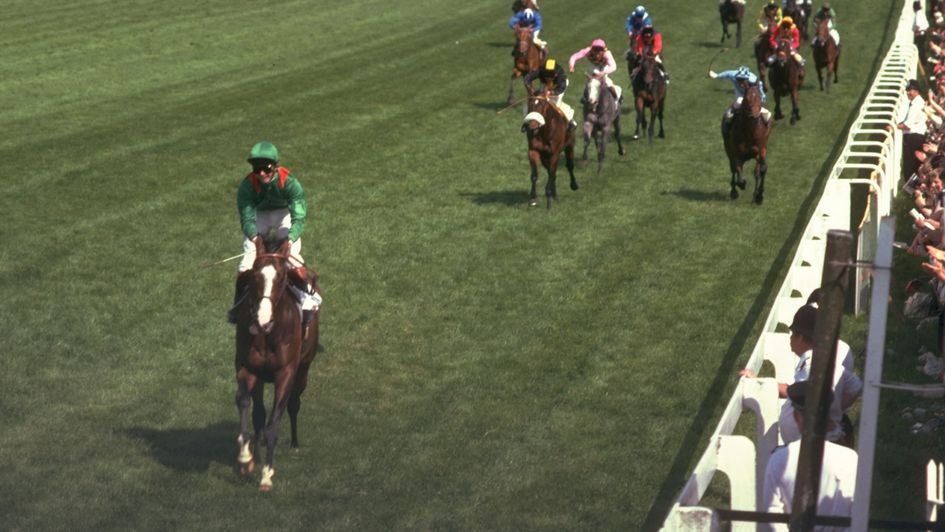 Timeform highlight the best Derby winners since 1970, based on the rating they achieved at Epsom.

It is 40 years since SHERGAR produced his stunning ten-length success in the Derby, putting up a performance that earned him a Timeform rating of 140 which places him among the top dozen or so horses in the company’s history.

Shergar had won the Classic Trial at Sandown and the Chester Vase with ease, which meant he was sent off an odds-on favourite at Epsom under teenage prodigy Walter Swinburn. However, few would have expected such an exceptional performance in the 1981 Derby – Shergar earned a rating which has since been bettered by only Frankel (Dancing Brave, Dubai Millennium, Harbinger and Sea The Stars have also been rated 140).

Shergar’s kidnapping at stud in 1983, and the subsequent media frenzy, ensured his status as one of the most famous racehorses of all time, but it should not be forgotten that he was also one of the most talented and arguably the most iconic Derby winner – his winning margin of ten lengths remains a record for the race. Sir Michael Stoute

Only two years before Shergar produced his electric performance at Epsom there had been another outstanding Derby winner in TROY.

Troy was certainly not as impressive as Shergar in the Classic Trial at Sandown, but he registered a more authoritative success when upped to a mile and a half in the Predominate Stakes at Goodwood. That was a sign of things to come as Troy would enjoy a remarkable campaign, resulting in him being crowned Timeform’s horse of the year for 1979.

He was particularly impressive in the Derby, beating Dickens Hill by seven lengths. Held up through the first half of the race by Willie Carson, Troy made progress on the outside in the straight and produced what became a trademark power-packed finish, hitting the front approaching the final furlong and drawing clear of his rivals. 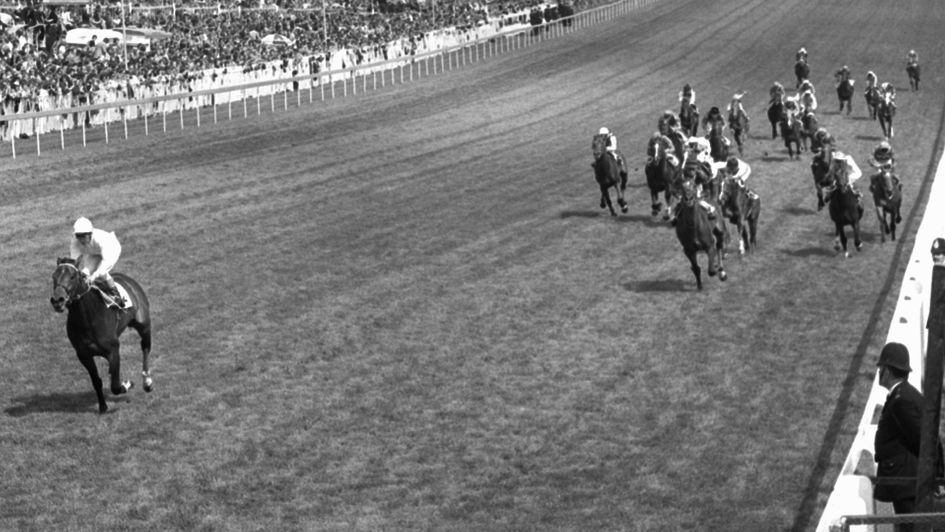 SLIP ANCHOR had shown promise on his first few outings, but he was not viewed as a serious Derby contender until producing a remarkable display in the Lingfield trial, which he won by ten lengths after galloping his rivals into submission from the front.

That dominant success earned Slip Anchor plenty of admirers and he was sent off 9/4 favourite for the 1985 Derby. His followers would have had few anxious moments as Slip Anchor put up a hugely impressive display under a bold ride from Steve Cauthen, who kicked his mount clear coming down the hill and effectively had the race in the bag for the whole length of the straight.

Injury and temperament issues held Slip Anchor back afterwards, but there’s no doubt he produced an outstanding performance at Epsom. Sir Henry Cecil 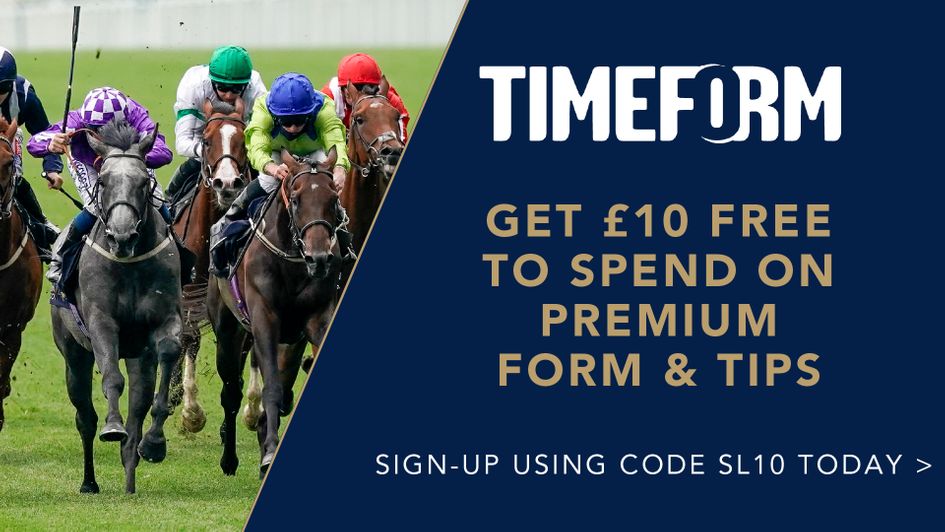 The summer of 1970 belonged to NIJINSKY, who won the 2000 Guineas, Derby and St Leger, completing a feat which has not been matched in the 51 subsequent years. Nijinsky had won the 2000 Guineas, the opening leg of the Triple Crown, by two and a half lengths with plenty in hand so he was understandably a warm order at Epsom, despite coming up against a leading French colt in Gyr.

Gyr hit the front going well as they straightened up but he was being tracked by Nijinsky, who quickened smartly at the furlong pole and readily pulled two and a half lengths clear, showing himself to be a remarkably versatile and talented colt. Nijinsky would make no mistake in the St Leger at Doncaster, landing the odds of 7/2-on in straightforward fashion to complete the Triple Crown. Vincent O’Brien

GRUNDY enjoyed a perfect campaign as a juvenile and signed off with an impressive six-length success in the Dewhurst. His three-year-old campaign got off to a slow start, however, as he suffered a first defeat in the Greenham Stakes and again had to settle for second in the 2000 Guineas when beaten by Bolkonski. He bounced back to winning ways in the Irish 2000 Guineas, however, which set him up for a tilt at the 1975 Derby.

Grundy appreciated the step up in trip at Epsom and ran out a dominant winner, hitting the front over a furlong out before drawing three lengths clear of Nobiliary.

Grundy followed up in the Irish Derby but is perhaps best known for his victory in the King George VI and Queen Elizabeth Stakes, which he won narrowly from Bustino after a ding-dong battle in a race regarded by many as the greatest ever witnessed. Peter Walwyn 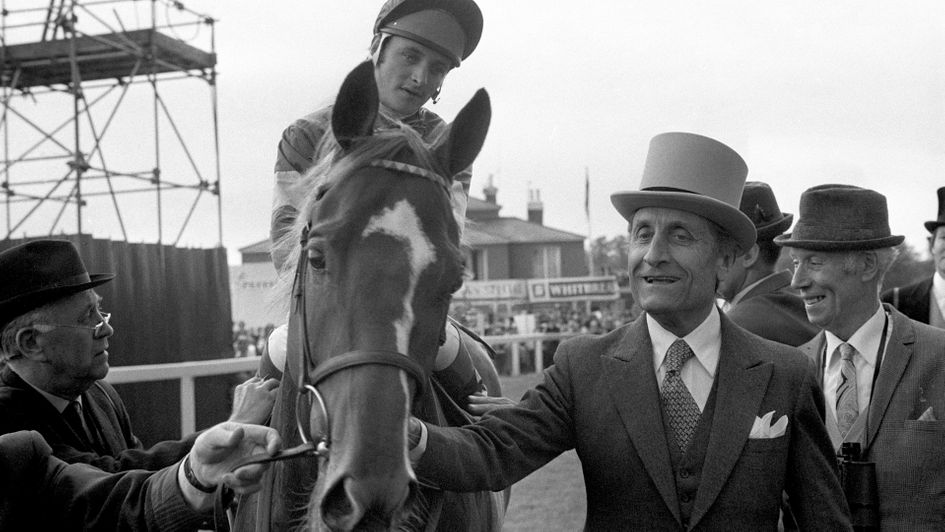 Grundy after his impressive Derby victory

GENEROUS was beaten in the 2000 Guineas but, as his pedigree suggested, he really appreciated stepping up to middle-distances and he racked up an impressive Group 1 hat-trick in 1991, starting with the Derby at Epsom.

After hitting the front entering the straight, Generous, ridden by Alan Munro, put his stamina to good use and impressively drew clear, beating Marju by five lengths with the rest of the field coming home at wide margins.

Generous went on to complete dominant victories in the Irish Derby and the King George VI and Queen Elizabeth Stakes, underlining his status as a top-class colt. Paul Cole