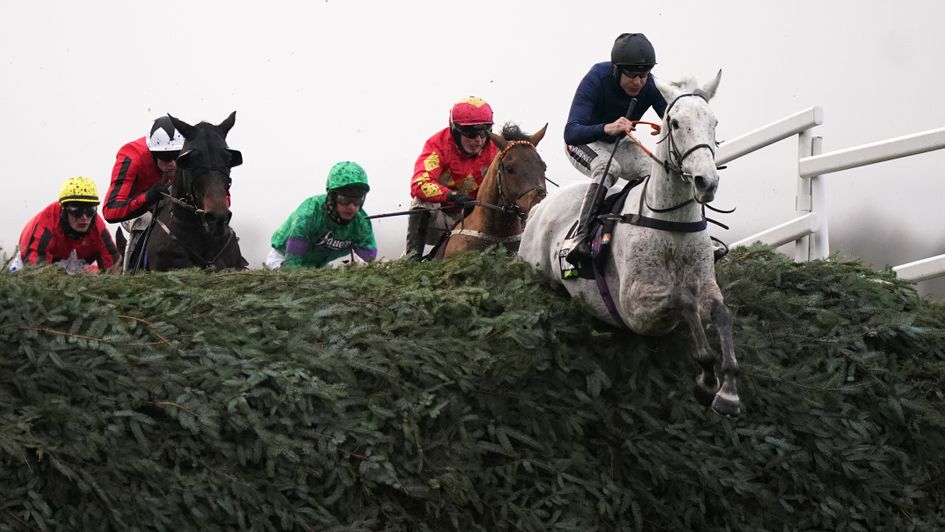 Snow Leopardess (right) on her way to Becher Chase glory

Snow Leopardess is on track for a Becher Chase title defence after pulling up on seasonal debut at Warwick last week.

The mare was three times a winner last season, striking on her first appearance at Bangor before pinging around the Grand National fences at Aintree to land the 2021 renewal of the Becher.

She then won a Listed mares’ chase at Exeter before heading back to Liverpool for the Grand National itself, a race in which she was pulled up after the 16th fence when finding the ground a little too firm.

At Warwick the grey made her first start of the new term, but the run was short lived as she slipped on approach to the first fence and was swiftly pulled up by jockey Aidan Coleman.

Trainer Charlie Longsdon reports the 10-year-old to be none the worse as a result, and a refresher over the National fences on Lambourn’s schooling ground is in order before she bids to retain her crown in the Boylesports-sponsored Becher on December 3.

“She’s going to go for a jump over the National fences at Lambourn tomorrow (Thursday) and she’ll do a bit of work, then the plan will be to go to the Becher at Aintree on Saturday,” he said.

“She’s absolutely fine, she’s in very good form. She just slid into the base of the fence at Warwick and there was no point in carrying on.

“She jumped on the outside of the fence where it was loose on top, possibly, it was one of those silly things but she’s fine.

“Aintree is the plan, I’ll give her a jump over a National fence just to be safe.

“There’s been a lot of rain and she does like that slower ground, plus it slows everyone else down so she won’t mind that.”