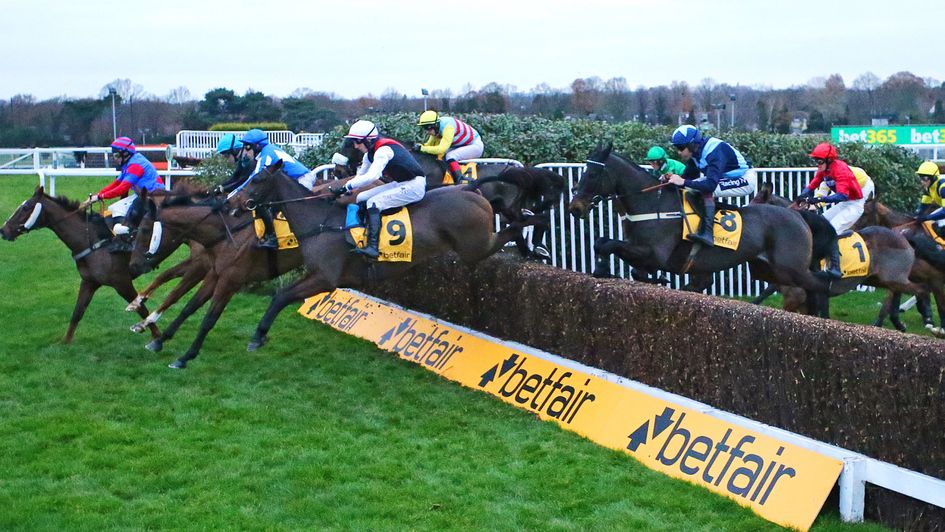 The London National field during the early stages

A dramatic conclusion to racing at Sandown on Saturday saw the concluding Betfair London National declared a void race and 10-day riding bans handed out to seven jockeys.

A field of 14 runners went to post for the three-mile-five-furlong handicap chase - and the drama began after the admirable veteran Houblon Des Obeaux slipped on the bend after jumping the Pond fence for the first time.

The rest of the runners raced on up the home straight and headed out for the second circuit.

Approaching the Pond fence for a second time, a member of the ground staff displayed a yellow flag, which is shown to indicate to riders that there is a serious incident ahead and that jockeys must stop riding and the race declared void.

But rather than pulling up, horses bypassed the obstacle and subsequently the stricken Houblon Des Obeaux behind the screens, with jockeys continuing to ride out the finish and negotiating the final two obstacles.

The Neil Mulholland-trained Doing Fine (14-1) passed the post in front in the hands of 7lb claimer Philip Donovan, but a stewards' inquiry was immediately called and following lengthy deliberations the race was declared void.

It was also confirmed that Houblon Des Obeaux had suffered a fatal injury.

As well as Donovan, the riders suspended by the stewards were Jamie Moore, Daryl Jacob, Harry Skelton, James Davies, Stan Sheppard and Adam Wedge, who earlier in the day had ridden his first Grade One winner, courtesy of Esprit Du Large.

"There were seven jockeys who continued in the race. The stop-race flag was just to the left of them and they appear to have bypassed it and bypassed the Pond fence and just carried on up the home straight.

"For that reason, all the jockeys who continued in the race were given a 10-day suspension because they failed to stop when they should have stopped.

"There's some confusion - they (the jockeys) said they didn't (see the flag), but the film clearly shows that the flag was there and that some of the jockeys have gone to stop and then started riding again.

"It's either 10 days or nothing and because it looks like they've seen the flag an they've ignored it, they've all got 10 days."

"If you want to stop a race you should have blocked off where we go. If no one had said anything and let the race go, no one would have cared. Apparently there was a flag in the back straight, but no one saw that one.

"You could see the sheets, but it was dark and over three miles and five, the horses were getting tired and you had a loose horse in front of you as well.

"My kids are having a lump of coal for Christmas now, although they might get a cheap Arsenal shirt. Fontwell at Boxing Day is usually a good day for me."

Wedge said: "We will be appealing. I think every lad there has done the thing they thought was right, given the conditions. None of us saw the flag but heard the whistle.

"We are coming to the Pond fence and we see the black sheets of a stricken horse that we thought were behind the fence. We did what we we thought was right and bypassed the fence, as we heard a whistle and didn't see the flag.

"We got to the other side of the fence and realised the horse is further round the bend."

A disappointed Mulholland said: "It's not good. They said they made a very quick decision to void the race. Sandown is a mile and six furlongs round, so why have they not shown a yellow flag until half a furlong before where the horse is on the ground?

"Not all the jockeys saw the flag. From where they were they could see the big, black screens in front of them and you're coming round an S-bend. Do they want the jockeys to pull up where there's a horse on the ground?

"There are three yellow flags at Sandown and one of them was in a car on the inside of the track, which isn't good.

"I don't have loads of good, young horses - I can't afford them. We're trying every week to win these big handicaps on a Saturday with older horses like The Young Master, Shantou Village and Doing Fine.

"When you win one and then have it taken away like that, it's tough."