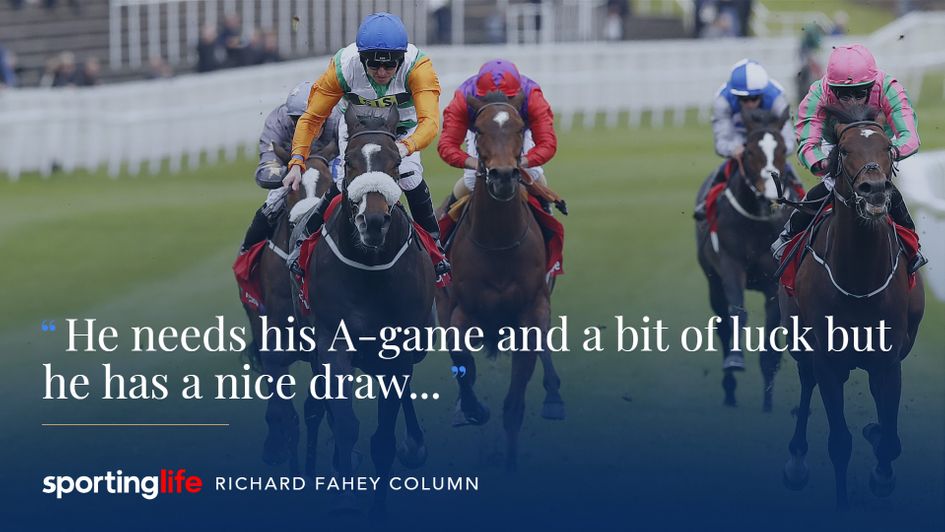 Richard Fahey has some fascinating Royal Ascot raiders on Thursday - check out the trainer's thoughts on his team.

I fancied him at bit at Newcastle the other day but you sometimes get the vibe that you’re in a special handicap – and this was one. The winner, Palace Pier, is second or third favourite for the St James’s Palace and the second, Acquitted, favourite for this race.

My horse was third and I like him. I desperately wanted to get a run unto him and felt on the day they got the run of the race and we didn’t and the step up to ten furlongs will suit us here. Stall 18 isn’t where I’d want to be but we can’t do anything about that.

It’s an amazing game. If you’d have taken the front two out at Newcastle I think the handicapper would have put Yoshimi up four or five pounds. But he left us alone. I wanted to go up to get into this race but we got there in the end anyway. He has to step up on the form of his reappearance but time will tell that wasn’t a bad race and wasn’t run to suit us. A mile-and-a-quarter around Ascot definitely will.

His preparations have been absolutely brilliant this spring. I saw him bucking and squealing coming back down the hill here the other morning, he was full of himself, having missed out on his May trip to Chester.

He’s in great form, we’ve been able to train him the way he want. It’s a very competitive Listed race, it looks Group Two class – borderline Group One – and he’ll need to be at his very best to be competitive. He can run well fresh and has won first time out a couple of times though. He needs his A Game and a bit of luck but he has a nice draw and if he was placed I’d be delighted.

I thought he ran respectably on his reappearance in the Pavilion Stakes at Newcastle and I definitely wanted to get a run into him before this, he’s a big, strong colt. He’ll come on for that return and the step up to seven furlongs will suit. It’s a tough race as always but he definitely has a place chance.

He’s also stepping up in trip as his last run was over six-and-a-half furlongs. He was always going to be a better three-year-old and goes in deep in handicap company here but is rated 94 and is knocking on the door of being a Black Type horse.

He needs to run well here if he is to become one and his work has been very good, he’s wintered extremely well. It’s always very tough at Ascot but he has a squeak.

I thought he ran a blinder when sixth at Lingfield the other day. You’re taking on trust he’s going to get the trip as he’s by Mayson but he’s out of a Montjeu mare and on the dam’s side he’ll definitely get it, his mother ran in a bumper. Nothing went right for him the last day an he came home well. Any one of ten could win this – and I’d put my two in that list.

We've always liked this filly and were very pleased with her return at Haydock. She's only had three career starts and there could be more to come. She needs to improve going into a race like this but it's definitely possible.