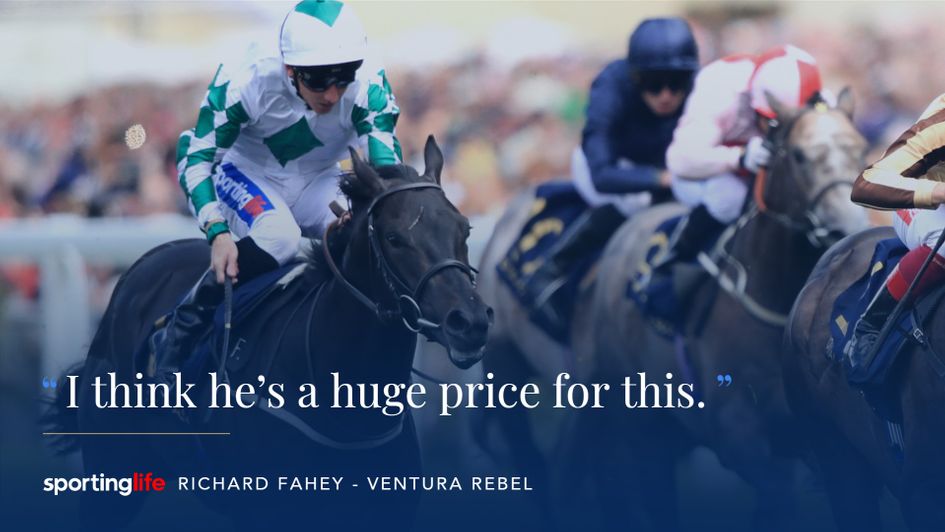 Richard Fahey guides us through his Royal Ascot team on Friday

Richard Fahey thinks Ventura Rebel is a huge price for the Commonwealth Cup on Friday. Check out his guide to all his runners.

It’s been difficult to find a race for him. We could maybe have got a prep race in but it wouldn’t have been ideal. It’s a good race for him to have a shot at, he ran at the meeting last year and didn’t set the world alight but he’s very fit and very well. He ran well first time last season and while he has to step up, we’re very pleased with him.

She was as hard as nails last year. She was beaten at long odds-on twice, but as time proved by two very good fillies. She’s very genuine and tries hard. She isn’t very big, we call her ‘pocket rocket’ but we’re happy with her and pleased to have this race to aim at.

He’s had a run and I thought shaped OK at Newcastle. Five furlongs will suit him better and the run will do him the world of good. He was gelded over the winter and I think he ran alright to a point the other day, those in front were just better than him. Back in a handicap you never know, the handicapper dropped him a couple of pounds, and he has a chance if you go back to his Molecomb run last year. I thought he was a little unlucky not to win at Goodwood. It’s typical Royal Ascot in that there’s 20 in there with a chance and you need luck. Whichever one of mine gets it I hope goes well.

He finished sixth in the Pavilion Stakes on his return, behind some horses rated lower than him. It was a funny race but that can happen at Newcastle, but I was delighted to get a run into him. He hadn’t had one since the Weatherbys Super Sprint where he had a little setback.

He’s come out of the race in great order and I think he’s a huge price for this. He’s a decent horse and six furlongs will suit him really well. He ran a great race in the Norfolk at the meeting last year and I’m really looking forward to seeing him race. The run the other day has tightened him up. I went into it expecting him to need it and he did. 33/1 is a crazy prize.

We’ve always liked him. Some of his work last year was very good and I thought he’d go to Newbury and pick up the pieces there. He finished fourth in that Weatherbys Super Sprint and if you watch the race just shortened a touch in it.

He’s never been an extravagant work horse, he’s a lazy horse and loves to come off a fast pace which he’ll get at Ascot. We can send him with a good one here and if they a good gallop he’ll pick them up in the end. That’s his racing style, it’s what he loves, and everything in the Commonwealth Cup is perfect for him. I’m really looking forward to it.