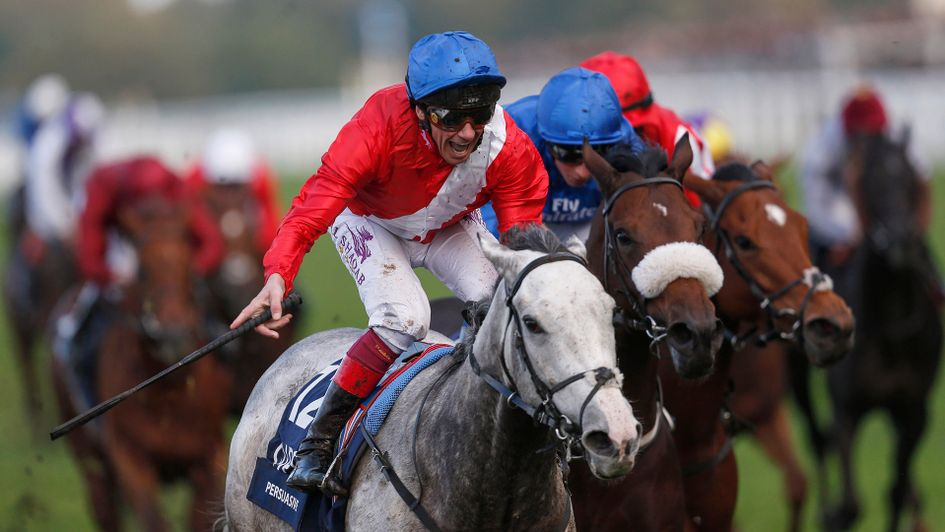 Persuasive made sure Frankie Dettori was on the scoresheet on QIPCO British Champions Day at Ascot as she ran out an impressive winner of the Queen Elizabeth II Stakes.

Without a prior win this season, the four-year-old filly was sent off an 8/1 chance to beat the boys and quickened up smartly to win in style.

Ribchester, the leading miler in Europe this season, tried to control the race with two furlongs to run, but was there to be shot at in the closing stages.

When Dettori got in the clear on John Gosden's grey she found a change of gear that Ribchester could not live with, eventually scoring by an eased-down length. Churchill was third for Aidan O'Brien, while Nathra, a stablemate of the winner, was fourth.

Gosden said: "He was saving and saving, trying to keep her together. He went for a run on the inside and got blocked, so had to take her back and swing out. She'd have been an unlucky loser.

"When she got out she flew down the middle of the track and Nathra ran a blinder in fourth, they are both off to stud now to be mothers but they've gone out in proper style."

Dettori, who performed his trademark flying dismount in the winner's enclosure, said: "She travelled so well, the ground is so key to her.

"She has an exceptional turn of foot and put the race to bed very quickly. This very race was my first Group One in 1990 (with Markofdistinction)."

Ribchester had found testing conditions against him when beaten in the Sussex Stakes at Glorious Goodwood, and his trainer Richard Fahey said: "It's deja vu, the ground has beaten him again.

"He's a horse that's won on soft ground, but he's such a good moving horse. William (Buick) felt he came there to win and win well and he just gets blunted in the dead ground.

"He just doesn't put it to bed and the winner coped with the conditions better. That's twice he's been beaten in desperate conditions, but we're happy enough - I'm not really, but I'll have to say that."

Asked about a trip to the Breeders' Cup, Fahey added: "I can't even think about that at the moment. I'll get him home and see how he is and speak to the team.

"I'm proud of him, but disappointed really. For me his best run of the season was Royal Ascot when the ground was quick and he broke the track record.

"If he hadn't have won the Mill Reef on slow ground I'd have always been worried about the ground with him because he's such a good moving horse. He hasn't lost anything in defeat and he hasn't devalued himself in any way.

"He's come back bright as a button. Frustrated rather than disappointed."

Reflecting further on the performance of Persuasive, Gosden said: "She is a phenomenally good filly. We've waited for this ground, she loves this ground. I don't think she has had any luck in Group Ones.

"Things have gone wrong for her, but it has come right today. She is retired to stud and goes out on a high. I think Chris (Richardson, racing manager of owners Cheveley Park Stud) said she is in the QEII and if it rains should we run and I said it is a very good idea. It was as simple as that.

"We are thrilled and she deserved it. She is a nice filly.

"It never worries me late in a year with a filly (taking on colts) because I think they go through hell in the spring and summer coming in and out of season. They come to the late summer and autumn and everything is settled and they can focus on racing."