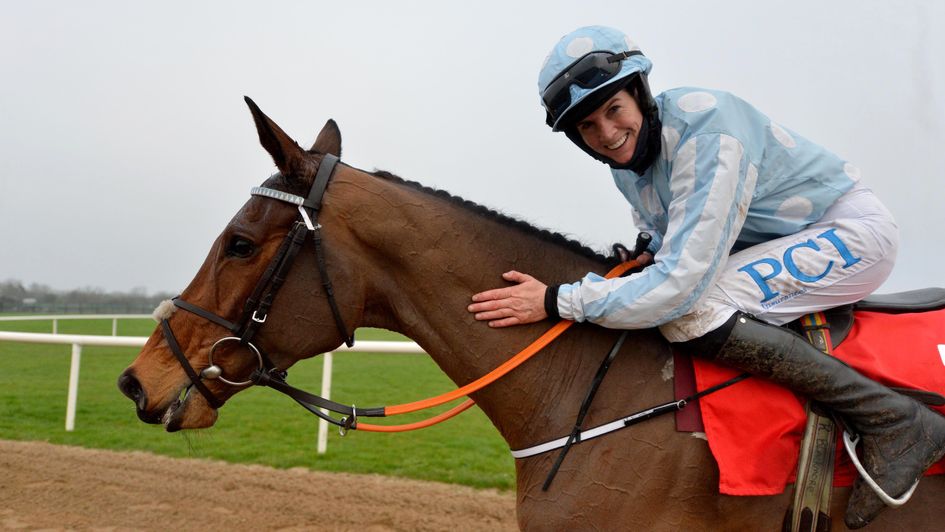 Rachael Blackmore gives Honeysuckle a pat down the neck

When you hear the word ‘unbeaten’ who springs to mind? Frankel? Black Caviar? Zarkava?

The heroes that retire as such are rare in the flat game and obviously non-existent in the jumping sphere as individuals here progress through novice to open company in the varying disciplines of bumpers, hurdles and fences, over a much longer period of time.

There are, however, two undefeated Grade One winning individuals campaigning through the National Hunt world at the moment and there is something so magical about the unblemished string of ones beside their name.

One is doing so in a manner of demolition. That horse is Envoi Allen and he has been bulldozing through novice company in a way that has caused people to label him as the second coming.

The other, however is a mare; unceremoniously slicing through Grade One open company of the opposite sex as if they were butter, winning a fifth Grade One in nine starts at the weekend, and that mare is of course Honeysuckle.

She joined the likes of Istabraq, Solerina and Apples Jade on Sunday when winning a second Hatton’s Grace at Fairyhouse and although trained in Ireland, must be one of the best and most exciting British-bred horse for some time.

One of the most exciting horses in training full stop, in fact.

Where did Honeysuckle come from and what is she made of?

Bred by Dr Geoffrey Guy, Honeysuckle cost €9,500 to Mark O’Hare as a three-year-old back in 2017 and Peter Moloney of Rathmore Stud then paid €110,000 for her the following year on behalf of Kenneth Alexander after her point-to-point win by 15 lengths.

She is by Sulamani out of a dual Listed hurdle placed mare in Germany. And beginning with the former, Sulamani was actually a high-class flat performer bred by the Niarchos Family.

He won six Group One races over 10 and 12 furlongs including the French Derby and placed second in the Prix de l’Arc de Triomphe (behind Marienbard and ahead of High Chaparral), for his breeders, before being bought by Sheikh Mohammed and transferring to Saeed bin Suroor and into the blue silks.

For new connections, the globetrotter immediately won the Group One Dubai Sheema Classic at four years as well as Arlington Million and Belmont Turf Classic in the States followed by the Juddmonte International at York and Canadian International at Woodbine at five years.

A half-brother to dual Derby winner Dream Well (sire of Klassical Dream) and despite his impressive race record, Sulamani retired to Dalham Hall Stud at a fee of £7,000, which he remained at for three years before transferring to Darley’s French branch Haras Du Logis for another three.

His best progeny from those six years came from his first crop of just 38 runners, the St Leger and Hong Kong Vase winner Mastery. And he does have four other top-level winners from his shuttle trips to South America.

In the three years he stood in France, Sulamani covered just 114 mares in total and so in 2011, relocated to Yorton Stud Farm in Shrewsbury to stand National Hunt at a fee of £2,500.

Although his second season at stud at Dalham Hall did not give rise to any stakes performers on the flat, it did however give rise to the 2011 Grade One Future Champions Novice Hurdle winner at Leopardstown, Cash And Co, as well as 2016 Aintree Grand National winner Rule The World.

And of the jumping crops that were bred at Yorton until Sulamani’s early death in 2017, there are still youngsters to emerge, but they include the winner of this year’s Grade Two Reynoldstown Novice Chace at Ascot for Colin Tizzard, Copperhead, and of course this Irish Champion Hurdle heroine, Honeysuckle.

Honeysuckle’s dam First Royal cost €10,000 at Arqana in December 2008 after placing in two Listed Hurdle races in Germany. She is the only foal out of her own unraced dam who is a daughter of German Listed winner First Smile. Bar Honeysuckle and First Royal, it is a German flat family.

First Royal has produced five known foals to date, three of whom are winners. Her second foal Colorado Doc, is a nine-year-old by Dr Massini and won a novice handicap chase on his fourth start under rules this year for David Brace.

And Honeysuckle’s younger full-brother Last Royal who is five this year, won his first start in a bumper in July and placed second on his first start over hurdles in September for Keiran Burke, from just two outings.

How does Honeysuckle match up to Annie Power?

To make somewhat of a comparison on Honeysuckle’s achievements, Annie Power was unbeaten in her first ten starts.

She won the Grade One Mares Novice Hurdle at Fairyhouse on her seventh start before two Punchestown Mares Champion Hurdles on her twelfth and fourteenth starts and the Champion Hurdle and Aintree Hurdle on her final two (sixteenth and seventeenth).

Honeysuckle won the Grade One Mares Novice Hurdle at Fairyhouse on her fourth start, her first Hatton’s Grace against the boys (and Apples Jade) on her sixth, the Irish Champion Hurdle against more boys on her seventh, the Mares' Hurdle at Cheltenham on her eighth and making it four Grade One wins in a row (five in total) on Sunday, one can only dream of what is still to come.