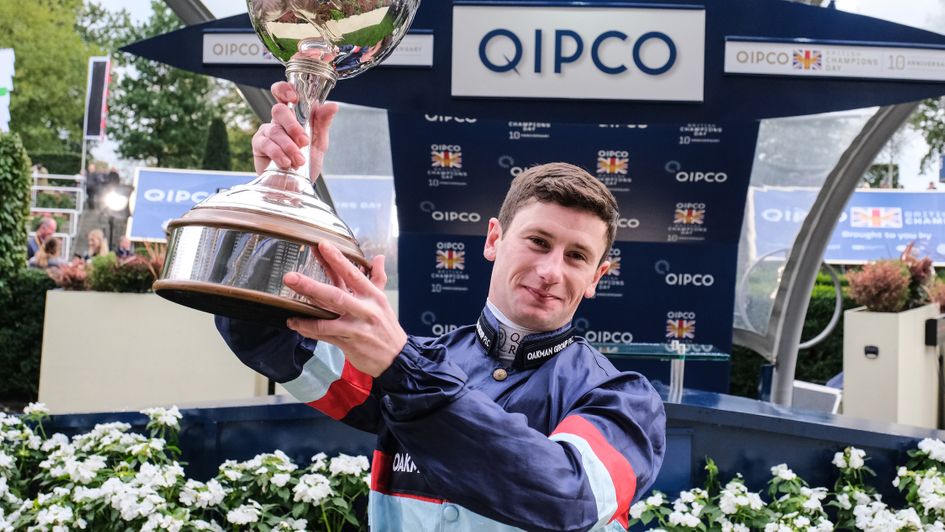 From the moment Oisin Murphy kicked off his UK career in 2013, it has been an upward trajectory for the three-times champion – at least in the saddle.

A prodigious horseman, the Cork-born rider made an almost immediate impact after joining the famed apprentice jockeys’ academy at Andrew Balding’s yard, grabbing the headlines by riding a four-timer on Ayr Gold Cup day in 2013, including the big race with Highland Colori.

After making such a splash, it was hardly surprising people quickly latched on to just how good the the 19-year-old was, with Murphy crowned champion apprentice in 2014 on what was certainly a fast-track to the big time.

Sheikh Fahad Al Thani and his Qatar Racing operation soon recognised his potential and snapped Murphy up as his retained rider in 2016 – a partnership that quickly bore fruit with victories for the likes of Pallasator, Lightning Spear and Simple Verse and would go on to yield Murphy’s first British Classic win aboard Kameko in the 2000 Guineas. Not to mention an epic 2018 with multiple Group One hero Roaring Lion.

Murphy claimed his first jockeys’ championship in 2019 – a memorable year on more than one front as he joined an elite band at the end of the campaign after riding Suave Richard to success in the Japan Cup, cementing his superstar status in the Far East where racing at the highest level is massively lucrative.

However, the title-winning campaign also marked the first time Murphy fell foul of the racecourse breathalyser test, being stood down at Salisbury on the eve of Royal Ascot – a transgression that resulted in a caution from the British Horseracing Authority as a first-time offence.

That appeared to be a minor blip and Murphy soon put it behind him, with Kameko spearheading a fine spring too, and the rider having another championship in the bag when the bombshell news broke that he had failed a drugs test in France earlier in the year.

Murphy, who maintained his innocence throughout, tested positive for cocaine when riding at Chantilly in July that year – a development that rather put a dampener on his second coronation at Ascot.

He faced a France Galop inquiry that November, with the French authority accepting Murphy’s defence that it was a case of environmental contamination from a sexual encounter, with scientific hair test evidence to back him up.

Murphy escaped with a lighter sentence of three months that saw him ruled out until March 2021, later revealing that he had contemplated quitting the saddle during that suspension.

He opted to continue in the weighing room and the likes of dual Group One winner Alcohol Free gave him plenty to smile about as he kept racking up the winners through the summer, supplementing his racing successes with some notable spins in the showjumping field, finishing second in an amateur class at Hickstead as he returned to a sport he competed in throughout his youth.

By the autumn it became clear Murphy was in a real battle for a third championship with William Buick, who had enjoyed a truly stellar season.

A nasty paddock incident as Salisbury at the end of September left Murphy needing stitches, although he barely missed a beat, but worse was to come the following week when he failed a breath test at Newmarket on the first day of the Cesarewitch meeting.

With Buick hot on his heels, an enforced day on the sidlelines added an extra layer of pressure the following week as the title campaign closed, but with 24 hours to go, it was clear Murphy would claim the crown for a third time at Ascot.

His coronation was somewhat overshadowed by reports in a national newspaper that he had been involved a pub fracas the previous week in Newmarket, with the incident apparently taking place the evening before he failed a pre-race breath test.

Murphy barely commented on the accusation, but Sheikh Fahad, who shares a strong bond with the rider, described him as “like a brother” as he launched a full-throated defence on Champions Day.

His support was clearly unwavering and so it remained when it emerged in December that Murphy was temporarily relinquishing his licence to tackle his “health issues” in the face of BHA charges relating to his Newmarket failure, plus an additional Chester test earlier in the season, and possible contravention of Covid restrictions.

In a statement at the time, he said: “It became obvious to me and to everyone else that I needed to seek serious help.

“Whether I deserve it or not, many kind people have stood by me and I really appreciate their support. I’m deeply embarrassed and regret my actions.”

His reputation has taken an obvious knock, but in seeking help there is a path back to the glory days. Others have been in his position – and returned stronger.

Aside from his obvious personal welfare, which takes priority, racing can ill afford to have such a talent in turmoil. 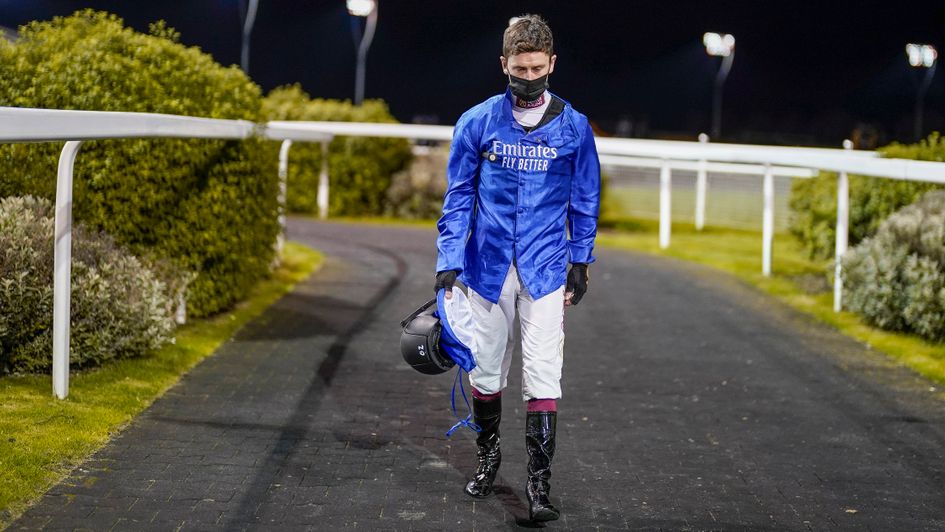 Oisin Murphy admitted his issues with alcohol had led him to make “grave” errors that resulted in the 14-month total suspension handed out by the British Horseracing Authority on Tuesday.

The three-times champion jockey addressed the independent judicial panel at length during the hearing, recalling his uncle, Cheltenham Gold Cup and Grand National-winning jockey Jim Culloty, warning him alcohol could be a “slippery slope”, while Ballydoyle maestro Aidan O’Brien had always cautioned about the dangers of excessive drinking.

Murphy spoke of how he avoided any difficulties until 2018, when he went to Hong Kong and “experienced the nightlife there”.

He said: “The first time I realised I might have a little problem was when I turned up to ride Beat The Bank work out there and Andrew (Balding, trainer) said my breath smelt of alcohol.

“I was second in the championship in 2018 to Silvestre de Sousa and I really wanted to win it, but at the same time my social life was growing.”

Murphy failed his first breath test at Salisbury in June 2019 and said that incident had “scared” him and recounted the occasion that led to him serving a three-month suspension after testing positive for cocaine in France in 2020 – when he successfully argued that it was a case of environmental contamination from a sexual encounter, with scientific hair test evidence to back him up.

He continued: “Later that year I went to Ayr chasing the championship and picked up a seven-day ban for careless riding. My girlfriend at the time suggested a holiday and I knew some people who were going to Mykonos.

“I remember some days before we travelled there was talk some countries were going on the red list, but I knew stepping foot on the plane that I was going to be telling some people I wasn’t going there and that I would be committing a lie.

“I had media commitments I had to carry out and if I was doing them from somewhere sunny, I would have to have a story.

“I lied to anyone who asked me where I’d been. I did have a phone call from the BHA and I felt I had to keep up the lie, I felt it could be contained and I wasn’t feeling any symptoms.

“The France Galop thing was in the back of my mind, the pressure was starting to take its toll. In the past I felt like I wasn’t to blame for things that had happened, this time I was.

“I got the three-month ban and I tried to put racing out of my mind. My mother came over but I was drinking most days. It was early in 2021 my mum warned me about my drinking, but I knew the BHA were on to me about Mykonos.

“I knew they were about to get me, it was a matter of time, but I still chose to lie.”

Murphy explained how he used alcohol to get to sleep, resulting in the Chester failure which he found out about prior to Royal Ascot.

He said: “I got through Ascot, I was leading rider and felt I could take whatever was being thrown at me, but David Redvers (racing manager for retained owner Qatar Racing) and Anna-Lisa Balding (trainer’s wife) were in my ear asking how I was coping.

“At Glorious Goodwood I knew they’d be testing every day but I was still drinking on the way home in the car. It was then it dawned on me I had a dependence on alcohol. Since 2018 I’d been using it to get me to sleep. I couldn’t remember going to bed any night that week.”

Murphy was involved in a prolonged battle with William Buick for the 2021 title, with the championship only decided the day before the seasonal finale on Champions Day at Ascot – a battle he felt had taken its toll, resulting in an incident in a Newmarket bar on October 7, the evening before he again failed a breath test on the first day of the Cesarewitch meeting.

He said: “The next morning my friends started telling me stories about what I’d done and the panic set in. I realised my drinking was out of control. I never drank in the morning but in the evening I could drink one glass of wine or 10.

“I took until October 8 for me to finally give in and realise that my issues of coping with pressure had led to me developing a dependence on alcohol. I should have realised earlier, David Redvers tried to help me but I convinced myself I could control it.

“I couldn’t undo the lies and deceit. Now that I’m sober I’m a different person and I’m pretty sure I wouldn’t have made those errors sober, but I can’t go back in time and I’m afraid they were grave issues.

“I dealt with success and failure the same. Drink was the rock I perished on. People had told me this could happen but I failed to avoid it and fell into the trap.

“The day I picked up the championship trophy there was no element of joy in it for me. I admit all the breaches and just wish I could have dealt with them better.”