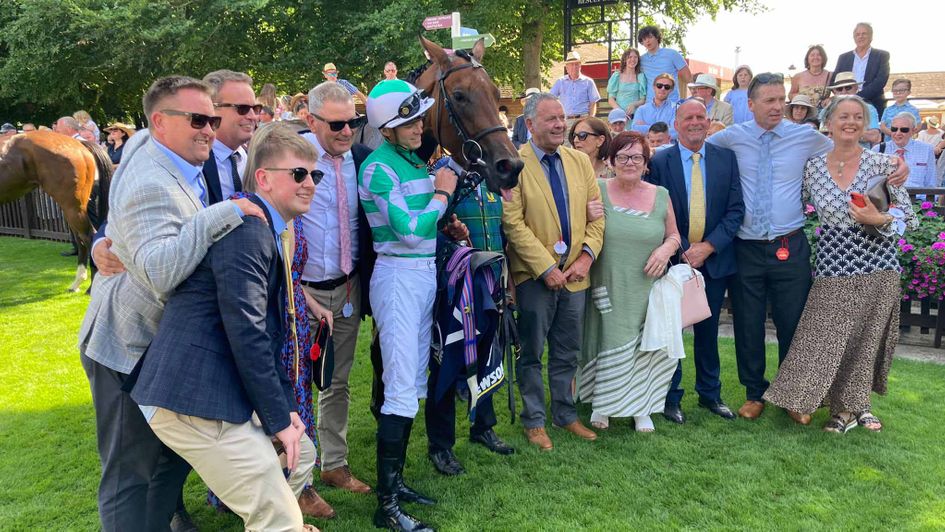 A moment to savour for the Lakota Sioux team

A review of the action from Saturday's meeting at Newmarket where Mark and Charlie Johnston saddled a treble.

Members of the Gallop Racing syndicated enjoyed what they described as a “red letter day” after Lakota Sioux provided them with their biggest-ever success when completing a 20.6-1 treble for Charlie and Mark Johnston in the Jewson Sweet Solera Stakes.

Having finished third in the Listed Chesham Stakes at Royal Ascot 49 days ago, the daughter of Sioux Nation made her first venture into Pattern race company a winning one when completing in the Group Three seven-furlong feature.

Moving stylishly into the lead approaching the final quarter of a mile the 100-30 chance looked to have matters well under control, however last time out Nottingham scorer Dandy Alys ensured she was not to have her own way after staging a late rally.

Forging into a slender lead inside the final furlong Lakota Sioux, despite once again displaying what is becoming her customary tail-flashing antics, found more than enough to prevail by half a length and complete a 6.2-1 double for winning rider James Doyle.

Following the race Paddy Power and Betfair introduced Lakota Sioux at 33-1 for next year’s QIPCO 1000 Guineas along with trimming her from 66-1 into 40-1 for the Cazoo Oaks at Epsom Downs.

Richard Walker, spokesman for winning owners Gallop Racing, said: “Our biggest winner before today was the Clipper Logistics Stakes which is a handicap at York with Firmament who has been our flagbearer for years but now we have a new kid on the block. We’ve only ever had decent handicappers like Firmament and Toto Skyllachy. To have a Group runner, let alone a winner, is a red letter day.

“It is what we dream off. Winning a Group Three back in her own sex she looks like she has a bright future. She still looks plenty green enough the way she was all over the track.”

An entry in the Group One Moyglare Stud Stakes could now be taken up by Lakota Sioux on September 11th at the Curragh, according to Walker.

He added: “We will let Charlie decide where she goes but she is in the Moyglare. James (Doyle) said he would not be in any rush to step her up to a mile yet and that she would be better sticking at seven furlongs.”

As for Charlie Johnston he feels that the £15,000 he picked Lakota Sioux up for at last year’s Tattersalls Ireland September yearling sale looks money well spent, despite describing her as a “problem child” early doors.

He said: “Every time I see her in the paddock I think how the hell did I buy her for £15,000 as she is a gorgeous filly. She was difficult to break in early on. I remember it vividly early on as she was one of our worst problem children in the winter. The tail has been a theme from day one. Joe Fanning has ridden her in most of her work but he at home and every jockey that has ridden her they don’t come in it feels real un-genuine and she is not trying. You can’t question her attitude there.

“She toughed it out well. This has been the plan since Ascot. I thought this track would be ideal for her. I knew Dance In The Grass was going to go to Sandown and I wanted to keep them apart but now that will be even more difficult as the May Hill looks the spot for both of them. How she has finished there maybe we should stick to seven. There is the Rockfel but she is in the Moyglare.” 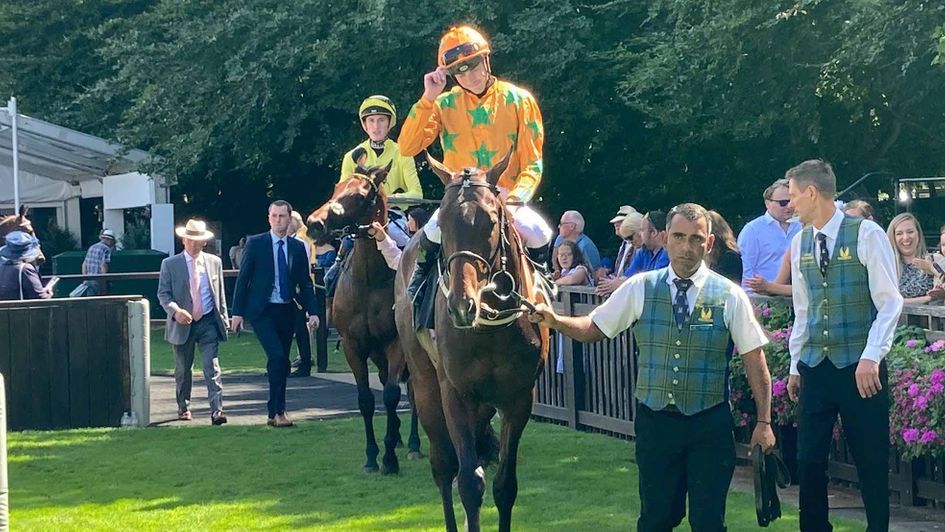 A trip across to Ireland beckons for Killybegs Warrior who initiated the treble for Charlie and Mark Johnston when bouncing back from defeat at Haydock Park to record a second course and distance success in the Discover Newmarket Nursery Handicap.

Giving weight away to his two rivals the 4/6 favourite secured a front running four length victory in the seven-furlong event to kick start Doyle’s brace and set up a tilt at the Goffs Millions at the Curragh on September 24th.

Charlie Johnston said: “He is a lovely big horse and he made a very pleasing debut here. We were disappointed to get beat at Haydock Park second time out. We thought he probably found the track a bit sharp and he never really looked comfortable.

“To be fair he never really looked comfortable today. That ground was quick enough for him and that is why he hung across to the rail.

“He came from Goffs and he is in the Goffs Million in the third week in September and that will be his main target.”

Madame Ambassador (2-1) might have left connections scratching their heads at Pontefract last time out however there was no questioning her attitude when completing the Johnston’s brace after scoring by half a length in the National Stud Handicap (1m 4f).

Charlie Johnston said: “I couldn’t tell you why she ran like she did at Pontefract last time out but it was a real blot on her copybook. You can’t say anything negative about her attitude when she has toughed it out like that. Richard (Kingscote) always felt she was going to win. She deserved that.”

Three for Doyle too

Classic winning rider Doyle later went on to complete a treble after steering the Charlie Appleby-trained Bay Of Honour (11/10) to glory by four lengths in the concluding National Horseracing Museum Handicap.

Doyle said: "He just needed his last run as he was a little bit fresh and gassy. It was not necessarily the plan to lead and I would have preferred to have cover. He popped out quite well and no one was over keen to go on. I went as slow as I could for as long as I could and it then turned into a dash over the last couple of furlongs.

On his treble he added: "I think all six of my rides were nearly favourite so it is nice when some win but it doesn't always work out that way but I'm very happy with three winners." 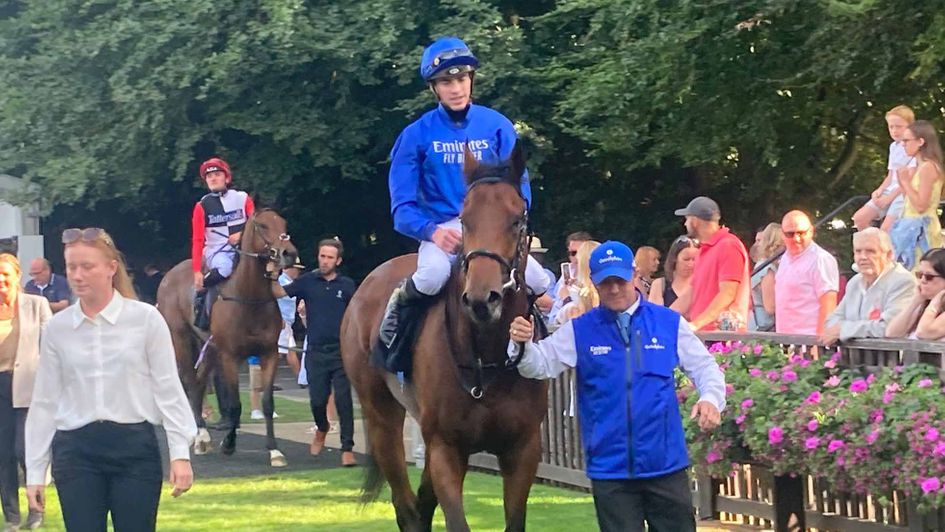 Bay Of Honour and James Doyle

Trainer Karl Burke might have to rethink his juvenile pecking order after Bright Diamond thrust into the market for next year’s QIPCO 1000 Guineas when leaving her rivals toiling with an impressive wide margin debut victory in the opening contest at Newmarke.

The daughter of El Kabeir appeared to be another potential star to emerge from the Leyburn handler’s yard this season when showing a decisive turn off foot to secure the British Stallion Studs EBF “Newcomers” Maiden Fillies’ Stakes.

Despite being one of the first under pressure, the 10/1 chance responded in emphatic fashion under Clifford Lee inside the final quarter mile of the seven-furlong prize before drawing right away to score by nine lengths from Liberalist. Following the race Bright Diamond was introduced at 25/1 for next year’s 1000 Guineas by Paddy Power and Betfair.

Burke said: “For a breeze-up horse she has always been fairly laid back at home and just goes through the motions so I certainly wasn’t expecting that. I’m delighted but I don’t think it was no fluke. I’m not sure how good the race as a few of the trainers were saying there ones weren’t great but she couldn’t have done it any easier.
She looked like the first beat half way. She ran on the wing and ran very straight and she wasn’t stopping at the line.”

An immediate step up in class and trip could be on the cards for Bright Diamond with Burke hinting that the Group Two Cazoo May Hill Stakes at Doncaster on September 8th might be next on the agenda.

Burke continued: “We will see how she starts working at home. It’s amazing as we are having a great year with the two year-olds and we have some lovely horses there. She was not near the top of the pecking order so it will be interesting to see how she works with those horse when she gets back.

“It is so important to get black type with these fillies and I think that is my first runner for Sheikh Rashid (Dalmook Al Maktoum) and we are very happy with that. She wasn’t stopping and Clifford said she will stay a mile no problem. Why not (think about the May Hill) - but we will just get her back and go from there.” 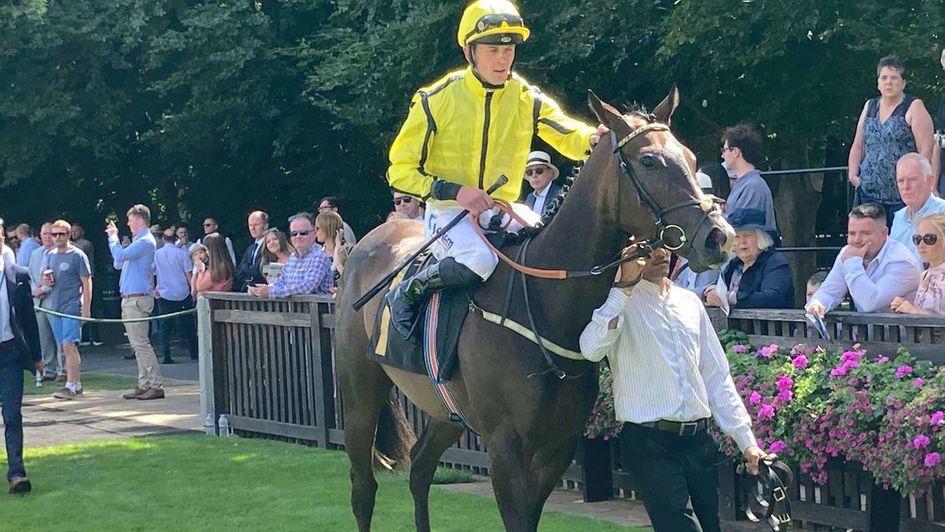