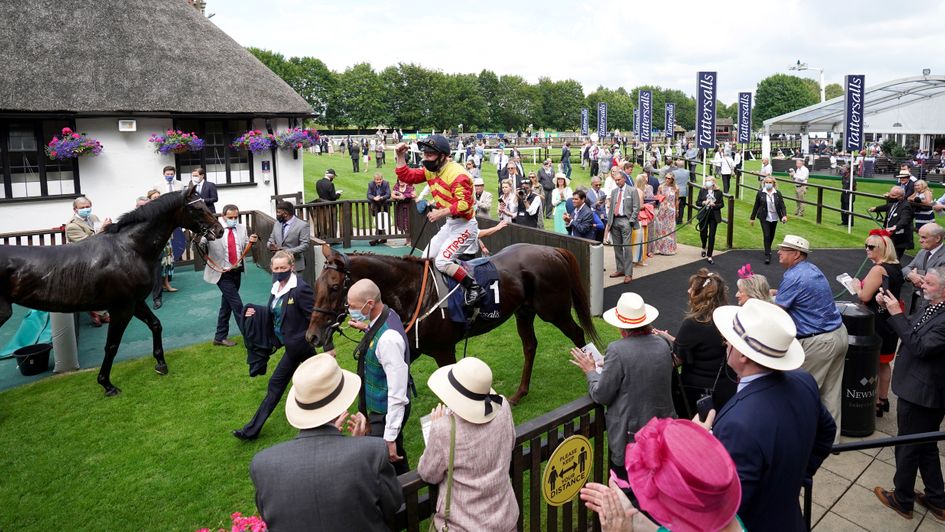 Sir Ron Priestley is cheered in on the July Course

A review of all the action on day one of the Moët and Chandon July Festival 2021 at Newmarket as Sir Ron Priestley beat Al Aasy in a thriller.

Sir Ron Priestley returned to winning ways when seeing off the persistent challenge of Al Aasy in the Princess of Wales’s Tattersalls Stakes at Newmarket.

Franny Norton set out to make all on Mark Johnston’s five-year-old, who is a half-brother to Gold Cup-winning stablemate Subjectivist.

With two furlongs to run, Sir Ron Priestley was being ridden – but not as vigorously as Highest Ground, who dropped away.

The odds-on favourite Al Aasy, normally a very smooth traveller, came off the bridle earlier than normal but still moved up to challenge as they met the rising ground.

In typical Johnston style, Sir Ron Priestley kept on battling against the rail – but Jim Crowley had still to ask for everything on Al Aasy.

However, as the line neared it, became obvious Al Aasy was up against a very determined opponent and would have to settle for second again – just as he did in last month’s Coronation Cup at Epsom.

“I got a bit of a fright when he came out of the gates because he lost his back end,” said Norton.

“But then after two strides he rolled on into it, and then I knew it would come down to a war.

“To be fair I was kind of emptying a little bit as well, but it would have to take a brave one to get by him.

“The good thing is, we kind of lost him at York and he ran ok at Ascot. I think the ground’s the factor.”

👏 Sir Ron Priestly dictates under a canny front-running ride from Franny Norton to fend off Al Aasy and land the Group 2 Princess Of Wales’s Tattersalls Stakes at @NewmarketRace for @Johnston_Racing!pic.twitter.com/M4L3lzmqyu 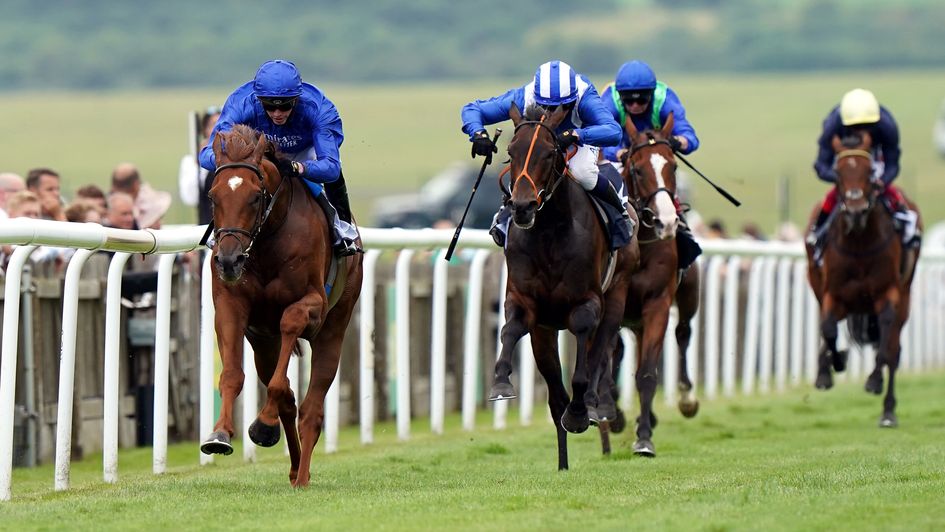 Yibir registered his first win as a three-year-old in the Group 3 Bahrain Trophy for Charlie Appleby and James Doyle on day one of the July Festival at Newmarket.

Gelded after being beaten by Irish Derby second Lone Eagle at Goodwood last time out, the procedure seems to have done him some good although he cannot run in the St Leger now – with this race traditionally a significant trial for the Doncaster Classic.

Always going nicely sat off the gallop set by Mark Johnston’s Gear Up, Yibir picked up nicely when he went up Mandoob’s inside with a quarter of a mile to go and he stuck on determinedly for an authoritative win.

Two and a half lengths ahead at the line, he led home the previously unbeaten Mandoob who ran well in second.

Stowell, beaten by winning trainer Charlie Appleby’s Kemari in the Queen’s Vase at Royal Ascot, disappointed in behind under Frankie Dettori.

“I’m very pleased with his performance there, he won like a very nice horse,” Doyle told ITV Racing.

“When you go through the form book, his first run of the year was pretty exceptional form, his run at Goodwood was pretty good, behind the horse that was second in the Irish Derby (Lone Eagle).

“I’m delighted with him, we kind of lost him a bit, hence the gelding, he’s a cheeky chap – he enjoys life.

“We had to be brave and when the race developed, we just stayed on the rail and got a nice split.”

🏇 Yibir has some strong form to his name and gets off the mark for 2021 with an emphatic win in the Group 3 Bahrain Trophy at @NewmarketRace!

🔵 Another classy 3-y-o for Charlie Appleby and @godolphin pic.twitter.com/jZJ8Py0SIE

Meanwhile Brian Meehan, trainer of 7-1 runner-up Mandoob, said: “I thought it was a great step up from novice company to a Group Three race.

“It was a really creditable run and I think he’s a really nice horse with a bright future. We could possibly go to the Lonsdale Cup at York next - he was entered in that this week, but he’s been a very easy horse to train because each target has been followed on from the next.

“I just love the way he’s operated today having come from novice company and he’s a horse with a bright future so we’re very pleased.”

Jockey Jim Crowley added: “He’s run very well and just got beaten by a better one on the day but it was a good performance. I’d like to think he’d come forward again for slightly further.”

FRANKELLA LIVES UP TO HER PEDIGREE AT THIRD TIME OF ASKING

Few horses in training can boast a pedigree as outstanding as Frankella, who was successful in the opening British Stallion Studs EBF Maiden Fillies’ Stakes over six furlongs. The two year old filly is by the outstanding Frankel and out of Arabian Queen, who landed the Group One Juddmonte International in 2015.

Home-bred by owner Jeff Smith and trained by Andrew Balding, Frankella had finished out of the money on her first two starts at Salisbury but there was a lot to like about her success today as she battled on gamely to score at odds of 20/1 by half a length from Princess Shabnam.

Winning jockey Oisin Murphy said: “She’s got a really good pedigree and it’s a great result for the family. She improved going back to six furlongs on better ground and hopefully she’ll build on this.

“She’s not very big but her dam wasn’t very big and she was very talented. I’d be very hopeful that this filly progresses – she’s certainly stepped up on her first two runs.” 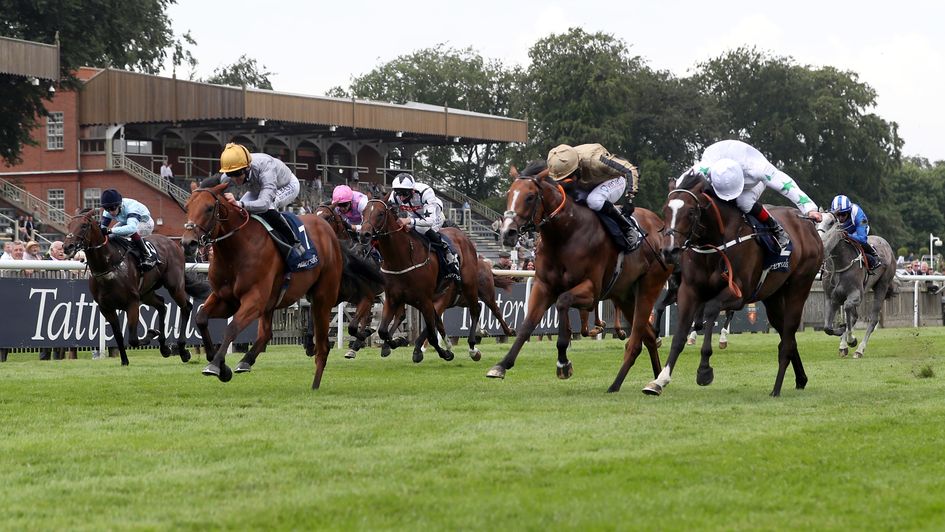 Lusail took his career record to three wins from four outings in the Tattersalls July Stakes at Newmarket.

Richard Hannon’s two-year-old broke smartly for Pat Dobbs and led the main group down the centre, but Graham Lee was keen to get the rail on Project Dante.

When that rival began to weaken a furlong and a half from home, Lusail was left in front – but the race was just beginning in earnest.

Tom Dascombe’s Sam Maximus, Alan King’s previously unbeaten Asymmetric and Hugo Palmer’s Ebro River all came to throw down a challenge – with the four in line at one point.

Ebro River was first to crack, not for the first time hanging badly, and Sam Maximus then began to tire.

There was not much in it as they crossed the line. But Lusail, who was emulating his sire Mehmas as a winner of this race, held off Asymmetric by a head – with the same back to Sam Maximus.

Hannon was confident, as Lusail passed the line, that he was in front.

“A trainer usually knows, and I think I’ve only got it wrong a couple of times.

“I thought he deserved to win – he ran around a bit going to the line.”

Lusail was vindicating Hannon’s judgement in reverting to this trip, after winning over a furlong further at Newmarket last month.

“It was a big shout to bring him back to six furlongs, but he’s done it very well,” the Marlborough trainer added.

“He’s come back in trip – he’s extremely relaxed, and I think we’ll take him to Goodwood.

“Whether we go there for the six (Richmond Stakes) or the seven-furlong race (Vintage Stakes), we’ll talk to the (owners) Al Shaqab team and see.

“He was just working okay in the spring. When I took him to York he hadn’t really come in his coat, and I wasn’t sure if I was doing the right thing, but he went there and won.

“He still looks like that now, but he’s just like his sire Mehmas in that he’s very honest and chilled out – and he will get further.

BLACKROD FOLLOWS IN HIS SIRE’S FOOTSTEPS

Nine years after Mayson landed the Darley July Cup the colours of his owner-breeders David and Emma Armstrong were carried to success at the July Festival again as his son Blackrod took the Each Way Extra at bet365 Heritage Handicap over six furlongs.

The 11-1 chance, trained by Michael Dods and ridden by Silvestre De Sousa, moved up to challenge entering the final furlong and ran on well to get up and score by a neck from Apollo One (12/1).

David Armstrong said: “He was a bit unlucky at York but we are very pleased today. We were confident of a big race because of York and how he had been working at home.

“He is normally a bit sluggish out of the start but he flew home today. He is a hell of a finisher. Personally, anything that goes over seven furlongs I get a nose bleed as we are only interested in sprinters, of course. We will keep him at six but going up to seven is not out of the question at all.

“Because he is a big horse he just needed that first run of the season to blow the cobwebs off. Michael (Dods) has got a full sister at home but she is not named yet so hopefully she could win a race or two.

“We did think as a two year old he could be a bit better than a handicapper. Obviously, it is all about what they do on the racetrack but his work at home is good and though the chance of making it at Pattern race level on percentages is very slim, that is what we are dreaming of and why we are in this game.”

James Doyle, rider of runner-up Apollo One, said: “It was a good run and a great effort to carry that weight so we’re really pleased with him.

“The winner didn’t join me until quite late on and obviously we were on our side by ourselves so I’m very proud of him.” 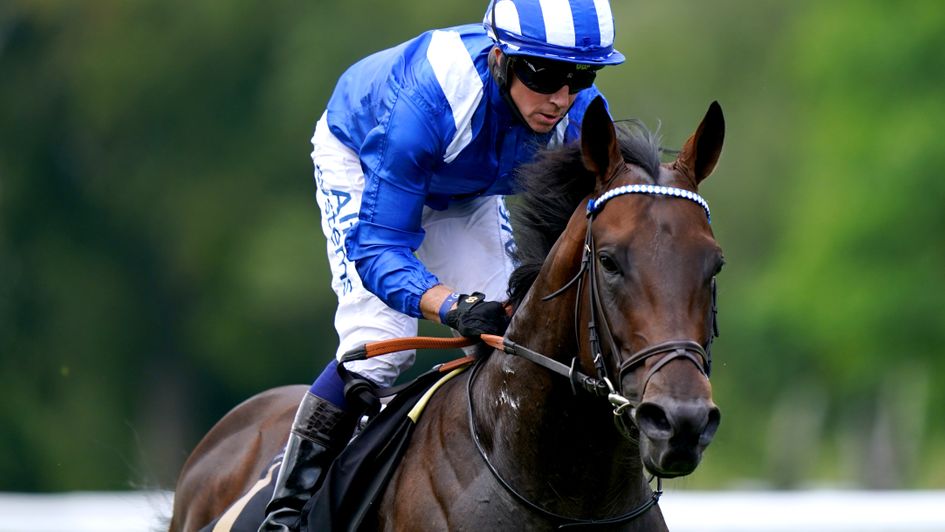 A full-brother to the high-class middle-distance performer Hukum, the William Haggas-trained three-year-old looked an exciting prospect when making a winning debut at Leicester – and confirmed that impression with a dominant display over this course and distance last month.

The Sea The Stars colt faced a far from straightforward task stepping up to Listed class, with St James’s Palace Stakes fourth Maximal and one-time Classic hope One Ruler among his four rivals, but he ultimately swept them aside with relative ease.

Always travelling well in the hands of Jim Crowley, the heavily-backed 10/11 favourite cruised into contention before readily extending four lengths clear, with Maximal a clear second ahead of One Ruler in third.

“He’s got speed and his brother is a mile-and-a-halfer, so he’s an exciting horse.

“His pedigree says he could step up to a mile and a quarter, but his style of racing doesn’t really say that. We’ll see, (but) I don’t think there’s any hurry to step him up in trip.

“I thought it was a really good Listed contest today, so to do that – come from the back and show a nice turn of foot – is a good sign.”

The Newmarket handler was non-committal regarding future plans, but a further step up in class seems certain.