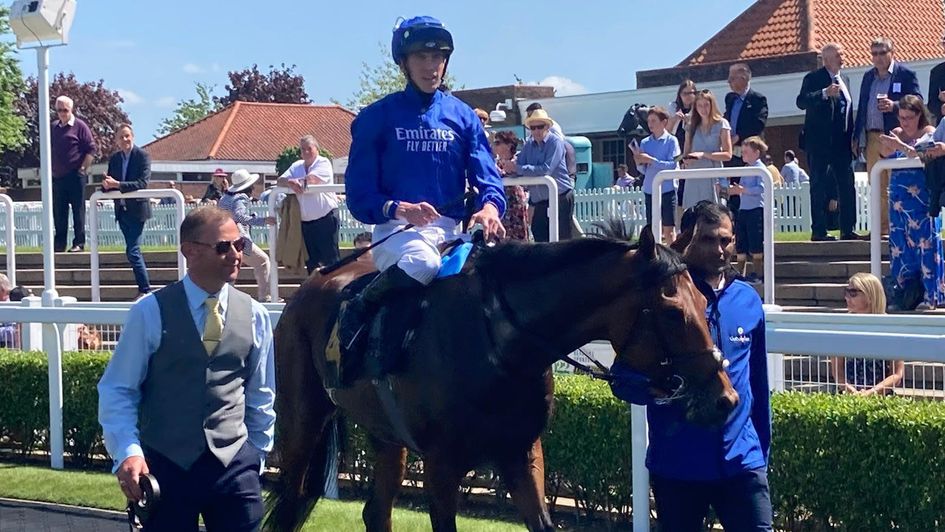 James Doyle insisted it was nice to get back on the scoresheet at Newmarket after following up his Classic double at the track when taking centre stage on the Rowley Mile once again aboard Ottoman Fleet in the feature Denbury Homes Fairway Stakes.

Having secured victory in the QIPCO 2000 Guineas aboard the Charlie Appleby-trained Coroebus and in the QIPCO 1000 Guineas on Cachet from the George Boughey yard a fortnight ago, the 34 year old again proved the man to beat in the Listed contest.

Despite stumbling out the stalls at the start, it failed to halt the momentum of the 13/8 second favourite who travelled in behind early pace setter and favourite Zain Sarinda for much of the contest before setting sail for home.

Showing a commendable attitude the gelded son of Sea The Stars, who like Coroebus is trained by Appleby, managed to repel Zain Sarinda on the climb to the line before prevailing by half a length to go one better than his debut at Newbury 28 days ago.

Doyle said: “He didn’t get off to the greatest starts. He knuckled at the stalls and nearly went down but thankfully he found a leg and I was able to stay on him.

“It was quite straightforward after that really. He travelled into the race well. He probably found the ground quick enough but showed a good attitude.

“There is not much you can do (when things like that happen at the start) you just have to hope the pace is genuine and that they don’t stack them up too much.

“They got racing a long way out and the Andrew Balding horse (Groundbreaker) got them racing from four down to open them up a bit.

“It is a bit quieter today but it is still nice to get on the scoresheet as it is a good local track to me and it is always nice to ride winners here.”

Ottoman Fleet holds a Group Two entry in next month’s King Edward VII Stakes at Royal Ascot and Doyle believes he would have no problem stepping up to a mile and a half for that engagement should connections go down that route.

He added: “I’ll leave plans to Charlie as he is the boss man at that.

“He has won over a mile and a quarter there and I’m sure he will stay a mile and a half but he is not slow at the same time.”

Before racing started former jockey Bob Champion was given the honour of carrying a relay torch into the winner’s enclosure at the Rowley Mile as part of the Festival Of Suffolk celebrations to mark The Queen’s Platinum Jubilee.

The relay, which started yesterday, will cover 588 miles across the county stopping off at more than 250 communities along the way before finishing at the Suffolk Show at Trinity Park, near Ipswich on 1st June. 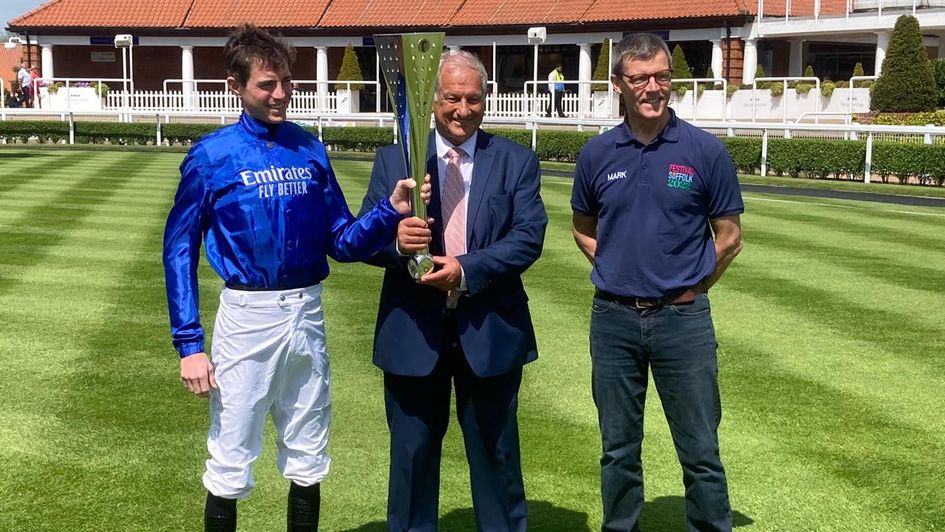 On arrival at the racecourse Champion, who steered Aldaniti to a famous victory in the 1981 Grand National at Aintree, was greeted in the winner’s enclosure by Classic-winning rider James Doyle.

Champion said: “It is a great honour to be part of this. I was only asked a few days ago. It is a great thing for Suffolk to do this as part of The Queen’s Platinum Jubilee.

“Suffolk for The Queen is a fantastic place, especially this area as she loves her racing and she likes having her horses trained here and she has Sandringham just up the road in Norfolk, where she has got her stud which has been very successful over the years.

“Racing has been part of my life for a long time and it is fantastic to do the torch relay leg here. It is great for the county and everything about it is really good.

“This is great for racing to be part of it and Her Majesty we know loves her racing and anything to do with racing she adores.”

Mawj proved that the World War Two Hawker Hurricane on display at Newmarket today was not the only flying machine at the track when setting up a trip to Royal Ascot with a stylish success in the Denbury Homes British EBF Fillies’ Novice Stakes (6f).

The Saeed bin Suroor-trained Exceed And Excel filly looked an exciting individual when clearing right away from her rivals in today’s contest, which was claimed 12 months ago by subsequent QIPCO 1000 Guineas heroine Cachet.

Bursting through up the stands side rail late on under Ray Dawson, the 12/1 chance quickly put matters to bed once sent on to cross the line four and three quarters lengths clear of Believing.

Following the race Mawj was introduced at 10/1 for the Albany Stakes at the Royal meeting by Paddy Power while William Hill were even more impressed after giving her a 5/1 quote for the same Group Three prize.

Bin Suroor, speaking away from the track, said: “She is a nice filly and she has always shown plenty of speed at home.

“She worked well last Saturday and she showed her class which gave her a chance today and she has finished that race well.

“I’ve some other nice two year olds that I’ve not run yet but she is a nice filly that has shown up well.

“She will improve for this and we will look for a better class race now. She will probably go to the Albany. Hopefully she is a filly with a nice future.”

Equally as impressed as Godolphin handler bin Suroor was winning rider Ray Dawson, who described Mawj as a filly with “plenty of class.”

He said: “She is very nice. They had not pushed too many buttons at home so today was the test but she has passed that with flying colours.

“Going to the start she gave me a nice feel but you never quite know what to expect first time out.

“Once that gap opened up near the rail, she was gone. She has got plenty of class.”

Dawson went on to complete a 57.5/1 double when the Heather Main-trained Celtic Empress (7/2) landed the TRU7 Fillies' Handicap (1m).

Jockey Adam Kirby ensured he kept in the good books of trainer Clive Cox after giving the Lambourn handler a winner on his 58th birthday with victory aboard Harry Three who made it third time lucky at the track in the TRU7 Handicap (6f). 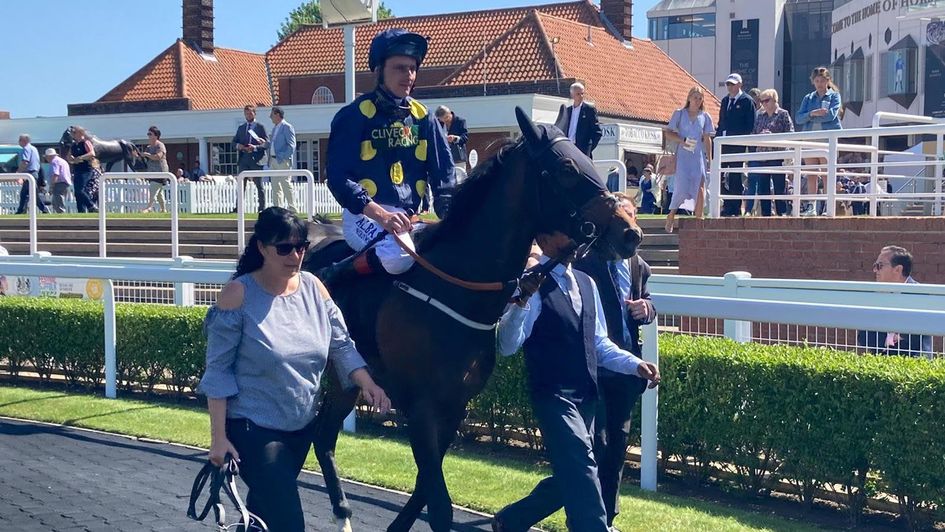 The son of Adaay went from hitting the woodwork to striking gold after bettering his third place at the track at the Craven Meeting and his runner-up effort at the Guineas Festival with a comfortable length and a half today.

Kirby said of the 9/2 winner: “He is very talented and it has all gone right for him today. He had a lovely position and the pace was good and strong and everything went smoothly.

“It gives the boss a birthday present so that will keep him happy. He seems to like the track here and he is a well-balanced horse.

“We always thought a lot of him. In his first two or three runs he was quite impressive then he lost his way a little bit but the last run or two he has started to come back and he has done it professionally today.”

Kirby hopes his victory aboard Harry Three is a sign of things to come aboard Claymore, who will have to defy the widest draw of them all from stall 16 in the Emirates Poule d’Essai des Poulains (French 2000 Guineas) at Longchamp on Sunday.

He said: “He is in good form. It is a shame about the draw but you can’t have it always. Hopefully he will run a big race.”

Harry Davies and Shine So Bright continued their blossoming relationship after adding to their last time out course and distance success by a length in the Birketts LLP Handicap (7f), however the winning rider admitted it was not love at first sight for the pair.

Davies said of the Andrew Balding-trained 5/1 winner: “The horse is so genuine. The thing with this horse is getting him into a nice rhythm and relaxed, as he can be very keen.

“Him falling out the gate slowly both times has been the trick. Them going quick up front as helped him as they have come back to him.

“I think the next stop will be Royal Ascot. He went through a cold spell this horse and it is nice to see him winning again.

“When I first went to Andrew’s and I saw him go up the gallop I thought I hope I never ride that horse and that just shows the lads at home have done a great job with him.”

Classic-winning rider Sean Levey ticked another box off on his CV after scoring for the first time in the famous Juddmonte racing silks after steering Time Lock to glory by six and a half lengths in the Birketts Next Level Law Fillies’ Novice Stakes (1m 4f).

Levey said of the Roger and Harry Charlton-trained 11/1 winner: “I’ve been riding a long time and by the time I retire I want to tick them all off.

“I’ve ridden a winner The Queen and the Magniers and this is another ticked off the list.

“Roger said she was very raw last time out and that race at Sandown had got the Oaks favourite (Emily Upjohn) in.

“Roger said teach her today and if it all falls right then great. They went a nice gallop and she finished off well.”