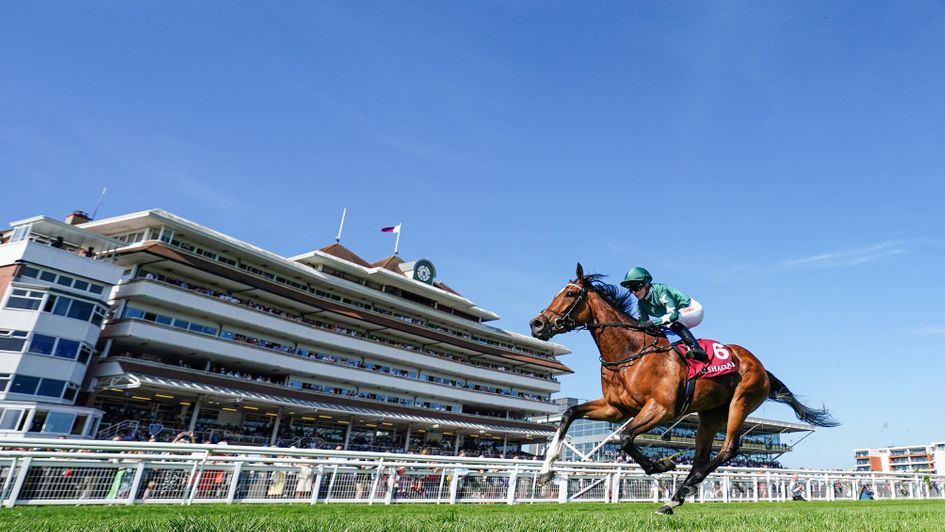 Nashwa was impressive at Newbury

Nashwa in the frame for Classic glory after stylish success

The Frankel filly had made an impressive seasonal debut at Haydock last month, after finishing third on her only juvenile start, and she was duly sent off the 5-6 favourite to double her tally under Hollie Doyle.

Nashwa was settled last of the seven runners as outsider Flash Betty set the gallop, but she could be noted travelling with ease half a mile from home in the 10-furlong event.

She made effortless progress to grab the initiative with a couple of furlongs to run, but 22-1 shot Stay Alert was not going down without a fight, battling back in the final furlong.

However, Nashwa was never in danger, recording a length-and-three-quarter triumph with Mukaddamah staying on for third.

Trainer John and Thady Gosden already house the Cazoo Oaks favourite in Musidora Stakes scorer Emily Upjohn, but Nashwa could yet take her chance at Epsom on June 3 and she is as low as 7-1 with some firms for the fillies’ Classic.

Connections were in no rush to commit to an Epsom outing though, with the French version at Chantilly on June 19 another possible option.

Teddy Grimthorpe, racing manager for owner-breeder Imad Al Sagar, said: “She did everything we hoped she would. She settled well, quickened well and galloped to the line. She has taken it in her stride in every way.

“She has got options of the Oaks and the Prix de Diane, which is a very nice conundrum, if it is.

“Obviously, Imad will talk to John and see what they want to do.

“It is only her third race and she is learning all the time. I think the great thing is the way she took herself into the race and settled when she asked her and she lengthened.

“She is a lovely-striding filly from that point of view, she looks smart. Hollie gets on with her well.”

Thady Gosden added: “She posted very smart sectionals at Haydock and she is a filly we have always liked a lot. She shows a great attitude. Obviously we were drawn wide today which was not ideal, but Hollie dropped her in and settled her very well at the back and she was very well switched off there. She picked up well in the straight and found a good turn of foot.

“Obviously, she will have learned from the experience today. They are two different types of horses. Emily Upjohn is a big, rangy girl, where Nashwa is a little more compact.

“There is Epsom or France for the Prix de Diane and she has plenty of toe, so that will be a possibility.”