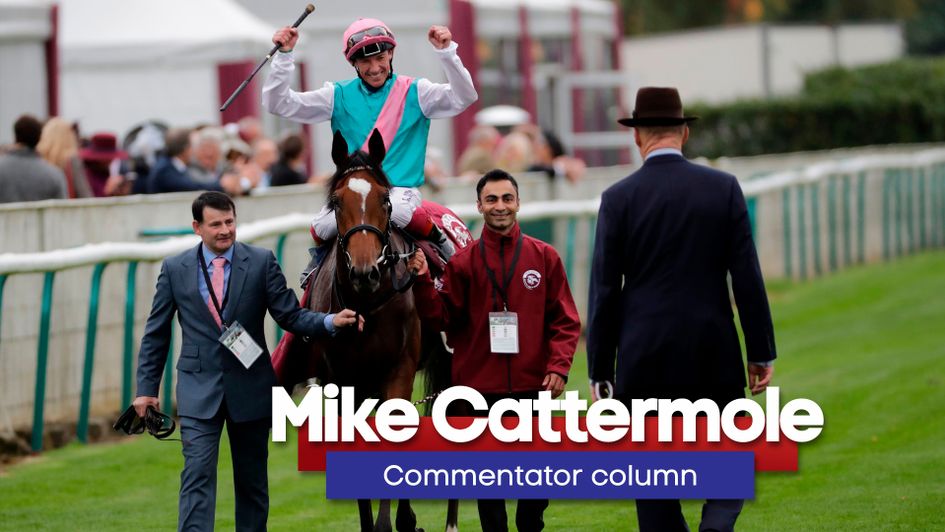 Mike Cattermole wonders whether Enable's biggest danger ahead of the Arc de Triomphe on Sunday may in fact be herself.

ENABLE ON THE BRINK!

Enable is such the perfect racing machine that there is expectation rather than optimism about her creating history with a third successive Prix de l’Arc de Triomphe at Paris-Longchamp on Sunday.

The fact that there are now no more than 11 opponents is also something to be excited about as the effect of the draw has been reduced, as indeed have the chances of poor luck in running.

So, what stands between Enable and equine immortality? On the opposition front, there are some very talented performers. Of course there are, it’s an Arc. But perhaps Sottsass, who has a touch of brilliance about him, is the biggest danger, even if his name is bit of a turn-off.

He is after all, a very good French Derby winner, when he comfortably defeated the top-class Persian King. Put away for the big one, he returned in the Prix Niel last month only to get into all sorts of trouble before displaying a very sharp burst of speed late on to get out - and up. There is likely to be even much more to come from him.

The other danger? Dare I suggest, maybe Enable herself?

John Gosden, at the towering peak of an already brilliant career, has mentioned that his star mare has become a little more “professional” as she has got older.

He compared her to a brilliant boxer who would be inclined to knock opponents out in the earlier part of a career only to rein back a little with maturity and pick opponents off to win more matches on points. In other words, Enable is more restrained these days, always doing just enough and nothing more.

It’s true that as a three-year-old, Enable would blow the opposition away. Coming into the Arc, she had won the Oaks, the Irish Oaks, the King George and the Yorkshire Oaks all by around five lengths - in fact by an exact average of five lengths per race.

She won the 2017 Arc by two and a half lengths and then reappeared late at four to win the September Stakes by three and a half lengths, when the race conditions weighed heavily in her favour against Crystal Ocean.

She won last year’s Arc by a short neck, the Breeders Cup Turf by three quarters of a length, the Eclipse by the same margin and the King George by a neck. Her two-and-three-quarter-length defeat of Magical in the Yorkshire Oaks in August was quite extravagant by her more modern standards!

It seems that this habit of conserving energy may be the same at home with Gosden remarking that she needed a change of scene from the Al Bahathri to refresh her a bit, hence that racecourse gallop at the Rowley Mile last week. Even there, there were no fireworks.

Enable will have to be on her mettle on Sunday. Engage her in a battle and you will likely come off second best as she keeps digging and digging.

However, if Sottsass is close enough – and we don’t know yet whether he will be good enough to be close enough - Christian Demuro may well delay the deployment of Sottsass’s turbo blast to pounce and try and nick it late on.

So far, though, Enable has dealt with just about everything that has been thrown at her and, other than those with an interest in the rest of the field, there can’t be many out there who will not want to see history being made in Paris on Sunday.

Although it is only four years since Treve had a go, surely it is going to be a long, long time before the feat is attempted again.

Let’s hope she does it!

TOWCESTER IS A HUGE LOSS

It seems unreal that we will never see jump racing at Towcester again.

Going to Towcester was always a fun experience, especially in the days of the charismatic Hugo Bevan, clerk of the course there for so many years.

I also liked the fact that it was one of the stiffest uphill climbs in the country and I will never forget being really impressed by the way a young horse called Strong Promise, owned and trained by Geoff Hubbard, made all there in a novice hurdle in 1995.

He never looked uncomfortable at any stage on this toughest of tracks and even finished on the bridle. “He must have some engine”, I thought, so I kept a close eye on him after that. Of course, he went on to become a top-class chaser and finished second to Cool Dawn in the 1998 Gold Cup.

I also admired the business plan they had there of not charging admission to get in. That was brave and, ultimately, deserved better.

When they unveiled their new updated grandstand a few years back, the future seemed rosy for Towcester. And of course, history was made there in 2013 when AP rode his 4,000th winner on Mountain Tunes, accompanied by an excellent call from John Hunt.

Peter Scudamore also notched up the first ever double century for a jump jockey at Towcester in April, 1989 when he rode a four-timer there at the evening meeting, having been flown up there in a helicopter - chartered by ITN! – from Hereford that afternoon. It is rightly regarded as a massive breakthrough at the time.

The town of Towcester is quaint and attractive but the surrounding rural areas have seen huge housing projects undertaken in the last few years. I suspect that, ultimately, that could well be the fate of the “Northamptonshire slopes” too. What a shame.

⛰️ With its stiff climb to the finish, it was a fitting place for AP McCoy to ride his 4,000th winner aboard the aptly-named Mountain Tunespic.twitter.com/kmNkP7aCpR

Two likeable men, who both had lengthy and successful riding careers, quit the saddle in the past few weeks.

Robert Winston was very honest about the demons he has had to battle over the years concerning long-term issues with weight and alcohol. He was champion apprentice 20 years ago and some good judges firmly believed that he would be Kieren Fallon’s natural successor.

Indeed, he may well have been champion in 2005 but a bad fall, which smashed his jaw, stopped him in his tracks.

Perhaps Robert didn’t rise to the heights he and many had hoped for – and that may not have been any fault of his - but what can’t be taken away from the Dubliner is one of the coolest rides I have ever seen.

This came on Librisa Breeze in the Challenge Cup Handicap at Ascot in October, 2016, when he recovered from being nearly last with nowhere to go until well inside the final furlong, only to get there with an amazing late burst that took the breath away.

It was quite incredible.

Like Winston, Fergus Sweeney also enjoyed Group One success, winning the Haydock Sprint Cup on Twilight Son. He has ridden abroad quite regularly of late as the rides at home started to dry up.

That was a shame. He was often associated with Henry Candy, Twilight Son’s trainer and I had hoped that a more recent link up with Martyn Meade not long ago might have been fruitful for the Ulsterman.

However, for some reason it wasn’t sustained. It wouldn’t have been because Fergus was difficult to work with, that’s for sure. He was always one of the nicest guys around.

Blessed too with a completely natural singing voice, in a James Taylor type of mould, he could always have a go at that now on the odd night off.

I wish them both well.

By the way, in researching Sweeney’s career I came across a translated piece on his recent retirement announcement. Probably translated by computer, it was a bizarre piece, often hilarious, which included such gems as describing his partnership with trainer “Henry Sweet”!