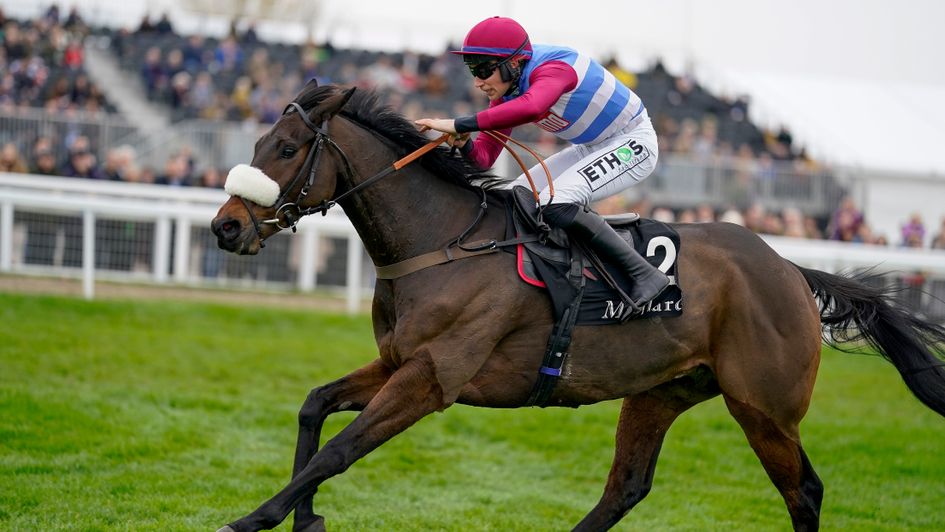 Threeunderthrufive in winning action at Cheltenham

Adam Houghton chats to owner Max McNeill, who will be hoping to cap a sparkling run of form with Threeunderthrufive in Saturday's Coral Gold Cup at Newbury.

It’s been a rather turbulent week in the world of National Hunt racing, but not for owner Max McNeill, who has rarely enjoyed a flurry of winners like he has in the last seven days.

It all started last Thursday when The Four Sixes made a successful hurdling debut at Clonmel, while three winners across the two-day meeting at Ascot – Thunder Rock and Persian Time on Friday and Thames Water on Saturday – ensured that McNeill went away feeling much better about his lot than most others in attendance, particularly the punters left short-changed by small fields and no-shows from some of the sport’s biggest names.

The McNeill bandwagon rolled on to Punchestown on Sunday where it briefly looked as though the owner’s luck had run out when his Cato Capone was worn down by Lecky Watson in the concluding bumper. Instead, the champagne was still flowing come Sunday evening thanks to the Punchestown stewards, who made the decision to award the race to Cato Capone as a result of him being carried left and bumped by the first past the post inside the final furlong.

There was a brief window for the McNeill family to rest any sore heads earlier this week, but normal service was then resumed at Wetherby on Wednesday when Spartan Army made the perfect start to his hurdling career with a wide-margin victory.

Trained by Alan King, Spartan Army comes from a school which has already produced top juveniles for McNeill such as Walkon and Grumeti, both Grade One winners in the red, white and blue silks with which the owner is most commonly associated.

It goes without saying that success like that enjoyed by McNeill over the years doesn’t come cheaply – Spartan Army, for example, was bought out of Joseph O’Brien’s yard for 170,000 guineas – but he is now well established as one of Britain’s biggest investors in the sport and clearly enjoys it as much as ever, particularly at times like this when the young talent starts to shine through.

Reflecting on the last seven days, McNeill said: “It’s been amazing. This time last week I was having a conversation with Adrian [Heskin, retained jockey] and Iain [Turner, racing manager] and we were all looking forward to taking the wraps off a lot of the nice novices that we’ve got.

“Spartan Army was the last dart that we had to fire from what we think is quite an exciting bunch of young horses. It’s nice that they’ve all justified the faith in buying them. We were expecting them to go well, but you don’t want to count too many chickens.”

Dream comes to fruition with Threeunderthrufive

Looking ahead to this weekend and McNeill certainly isn’t counting any chickens ahead of the Coral Gold Cup at Newbury on Saturday, one of the most prestigious races in the National Hunt calendar and one in which the owner has long dreamed of having a runner.

That ambition is set to be realised on Saturday and McNeill is hopeful that Threeunderthrufive can step up to the plate and lead by example, as befits a horse described as “the captain in our ranks”.

“He’s not that old, but we’ve got quite a young squad and he’s almost like the senior pro,” McNeill elaborated. “He had a really good novice season over fences, winning a couple of Grade Twos, and there’s plenty left in the tank.

“I think from when he first ran over fences as a novice, we all looked at each other and said he could be one for this race next year. If you’ve got a good three-mile novice chaser and you’re going into your second season over fences, it’s always likely that this race is going to fall on your radar.

“It’s a race I’ve always wanted to have a runner in, so fingers crossed all goes well. It’s the culmination of a dream I’ve had for a long time to have a runner and it would certainly be the biggest race we’ve ever won.” 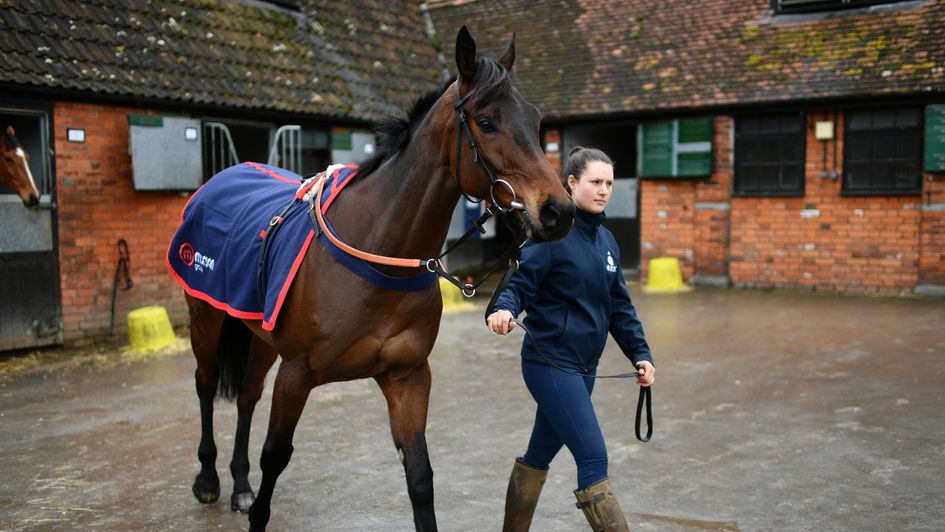 Cheekpieces could be the final piece of the puzzle

8/1 is now the best price available on Threeunderthrufive becoming the 2022 winner of the Coral Gold Cup and his connections are leaving no stone unturned in their quest to make that dream a reality.

Still relatively lightly raced after just six starts after fences, the seven-year-old will be fitted with cheekpieces for the first time on Saturday and McNeill reports everything else in his preparation to have gone to plan since a spin over hurdles to blow the cobwebs away at Wetherby last month.

Reflecting on that return to action, McNeill said: “He did exactly what we were hoping for really after taking a bit of a blow. When a horse takes a blow, it can go one of two ways. They’re either going to drop back through the field and you’ll be a bit disappointed, or they take the blow and stay on again. Thankfully, he took the blow and was running on again at the last.

“That run has brought him on a lot. Adrian sat on him at Newbury at the gallops morning the other week and he thought he’d come on from Wetherby. His schooling has been very impressive and he’s going to wear first-time cheekpieces on Saturday.

“It’s not questioning his will to win or his attitude, it might just help him in the early part of the race. It’s something that Paul [Nicholls, trainer] and Adrian had a chat about and I know he’s schooled in them this week. It’s all systems go for Newbury now and I just don’t want to hear from Paul in the next 48 hours!”

Shearer looks for third strike of the season

Threeunderthrufive’s performance on Saturday will inform plans for the rest of the season and it’s said to be a similar story with stablemate Shearer, who will be on a redemption mission when he lines up on Friday’s card at Newbury.

In a rare bit of bad luck for McNeill in recent weeks, the well-backed Shearer was hampered by a faller and unseated his rider in a valuable handicap hurdle at Cheltenham’s November Meeting last time. He departed too far out to suggest the outcome, so everything now rests on Friday when it comes to deciding the best course of action for the rest of the campaign.

McNeill explained: “We thought we’ll see how Cheltenham goes at the November Meeting and that will decide whether we stay over hurdles for the season or go chasing. Obviously, we were brought down there and it didn’t really answer any questions.

“We’ll try again on Friday and hopefully we’ll find out whether he’s competitive off his revised mark. If the revised mark looks beyond him, then we might look at going chasing, but that’s all something to be discussed.

“For a horse who disappointed us all at Ayr in April, Paul and his team have done a fantastic job just getting him right and sorted this season. To win two with him already at Worcester and Cheltenham has been fantastic.”

Away from Newbury, McNeill is looking forward to the action at Navan on Sunday, though it remains to be seen whether Three Card Brag will take up his entry in the Grade Three Monksfield Novice Hurdle, particularly as trainer Gordon Elliott still has two others to choose from.

Either way, Three Card Brag is very much a horse from whom the best is yet to come according to McNeill, with a step up in trip promising to suit after he was last seen finishing a staying-on third in the Grade Three For Auction Novice Hurdle over two miles at Sunday’s venue (replay below).

“If we have any runners at Navan on Sunday, Three Card Brag would be the one we’re most excited about,” McNeill said of a five-year-old who began his career with back-to-back wins in a bumper at Wexford in March and a maiden hurdle at Galway in October.

“He won a bumper last season and Gordon was very happy, although I think he caught a few people by surprise winning the bumper. He then went to Galway and won, and we’ve kept him at two miles just to see what he can do, but he was always going to be a stayer.

“The step up in trip will definitely help him and if Navan was to get any rain that would help even more. Finishing close up in a Grade Three over two miles last time when we know he’s going to want further, I think that makes him quite exciting.”

The Wolf looking for overdue win at Aintree

McNeill is also excited about the prospect of heading to Aintree on Saturday week with The Wolf, who remains winless in handicaps but has run several good races in defeat, including when filling the runner-up spot on his reappearance at Cheltenham in October.

The Becher Chase over the Grand National fences is next on his agenda and McNeill is hopeful that that unique test could play to the strengths of a horse who clearly has it in him to win a big one when everything falls right.

“It’s all systems go with The Wolf for Aintree,” McNeill confirmed. “He’s absolutely riddled with ability and he’s got so much in hand off his mark if he wants to put it forward, but he always seems to clout a fence or get going once the race is over.

“I’ve just got a feeling that the Aintree fences and the long run-in from the last will really suit him. He goes there with what I hope will be a live chance.”

Thunder Rock a potential captain of the future

As for the young horses who have been in winning action recently, Thunder Rock now looks destined for bigger and better things after making it two from two over fences at Ascot on Friday, easily defying a BHA mark of 142 as he drew clear in the straight to win by eight and a half lengths.

With a Timeform rating of 150p, Thunder Rock has already reached a similar level as Threeunderthrufive (151) did in his novice season over fences and the Grade Two Noel Novices' Chase back at Ascot next month will give him the opportunity to push his rating up higher still.

Who knows, perhaps we'll be talking about Thunder Rock this time next year as a leading contender for the Coral Gold Cup, but just to have one runner in the race has always been the dream for McNeill.

Threeunderthrufive is set to make that happen on Saturday and victory for the captain would be the perfect way to cap what has been a sparkling run of form for a young team going from strength to strength.