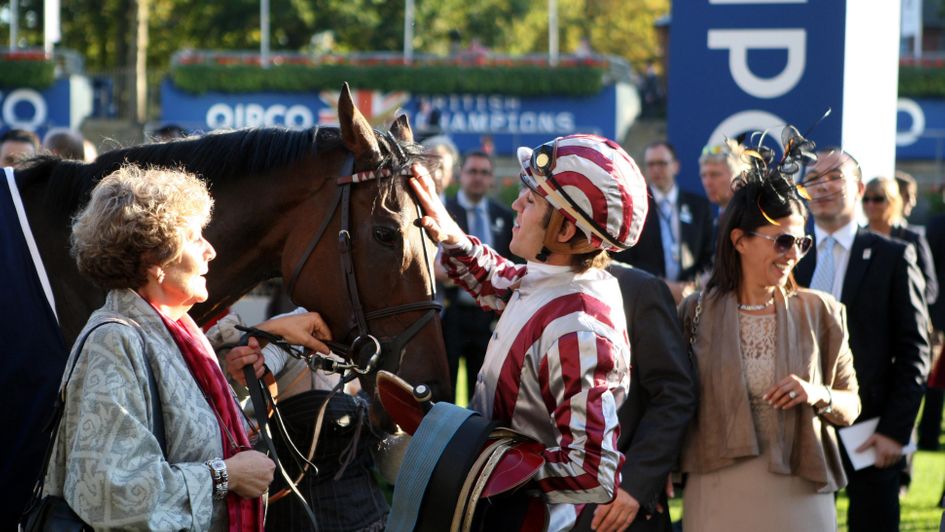 The inaugural running was the scene of Frankel’s four-length Queen Elizabeth II Stakes victory, but spectators were offered another treat when the ever-popular Cirrus Des Aigles made his Group One breakthrough in the Champion Stakes.

Trained in France by Corine Barande-Barbe, the gelding had been in superb form throughout his five-year-old season, running in nine successive Group contests and either winning or being only narrowly beaten each time.

A Group One title was not among those victories, however, and at that point a top-level win had alluded the bay – beaten just a neck in both the Prix d’Ispahan and the Grand Prix De Saint-Cloud.

Based in Chantilly and campaigned largely on French soil, Cirrus Des Aigles had previously journeyed to both Sha Tin and Tokyo but never before ventured across the channel to Britain.

The creation of British Champions Day and its record-breaking purse was enough to tempt Barande-Barbe over to Ascot, coupled with Cirrus Des Aigles’ short-neck loss in the Prix Dollar – a defeat she attributed to him becoming over-familiar with the track at Longchamp and anticipating the position of the first of two winning posts.

“He had a very big season that first year,” she said.

“He was just beaten in the Prix Dollar, because he’d mistaken the post.

“The horse knows Longchamp very well and stopped after the post, so I thought we’d go to England.

“People thought he was tired – but he wasn’t.”

Transferring from Newmarket to Ascot and offering a total purse of £1,300,000, the Champion Stakes attracted a host of big names – including So You Think after his Coral-Eclipse and Irish Champion Stakes success, three-time Nassau Stakes heroine Midday, King George VI winner Nathaniel and dual Oaks-winning filly Snow Fairy.

But Barande-Barbe was far from intimidated by the stellar form of Cirrus Des Aigles’ rivals.

“I really went there confident,” she said.

“I know people thought we were crazy to even consider it, because he hadn’t won a Group One and there were seven winners of 15 Group Ones in the race; So You Think, Snow Fairy and Nathaniel and so on, and he won. He still won.”

Ridden by Christophe Soumillon and sent to post at 12-1, Barande-Barbe’s star fought off both So You Think and Snow Fairy to cross the line three-quarters of a length ahead of Aidan O’Brien’s runner and land the first of his seven career Group One wins.

“It was a great, great moment,” added Barande-Barbe.

“It was a first Group One for him and it was a very special day, because just one hour before the race Frankel won – and people were screaming everywhere.

“He was so proud – like they were screaming over him! I remember that very well.

“The year after they met in the same race, in the Group One, and he was second – and second again the following year.”

In between his visits to Ascot for the Champion Stakes, Cirrus Des Aigles went on to take the Dubai Sheema Classic in 2012, the Prix d’Ispahan and the Coronation Cup in 2014 – and also won the Prix Ganay on a record-breaking three occasions.

“He was a magician, that horse.”