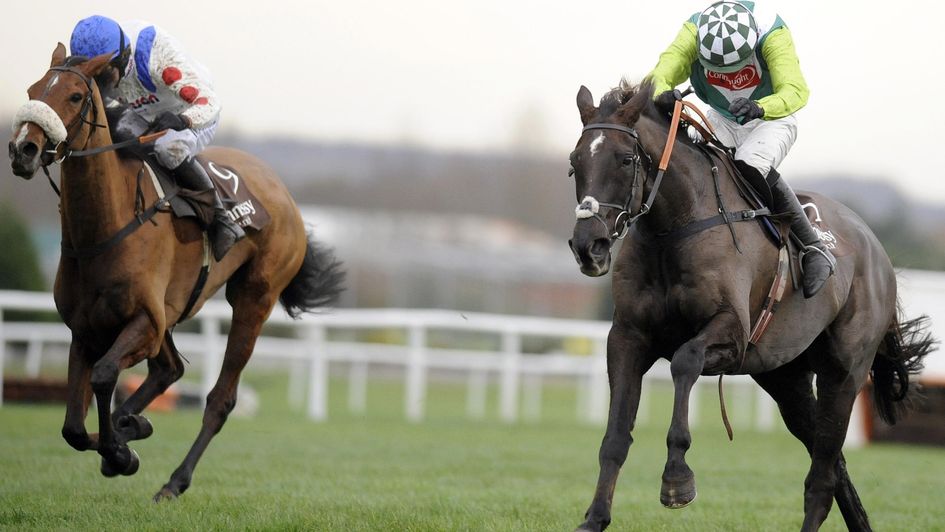 Denman has What A Friend's measure in 2009

David Ord shares his favourite memories of the Ladbrokes Trophy and uses Timeform ratings to provide a chart of the five best winners since 2000.

No matter your matter age, the Ladbrokes Trophy, or the artist formerly known as the Hennessy Gold Cup, must have played a big part in your racing life.

If, like me, you missed the era of Arkle and Mill House through the mid-1960s, there were your own golden days ahead. Mine started with Diamond Edge giving 18lb and a beating to rising northern upstart Political Pop, providing Fulke Walwyn with a seventh win in the race in 1981.

He carried 11st 10lb as did Bregawn 12 months later, the future Cheltenham Gold Cup winner overcoming a mistake at the last to reel in stablemate Captain John and provide Michael Dickinson with a famous one-two in the race.

Brown Chamberlain, so often eclipsed on the big day by the Harewood House big guns, had his moment in the sun in the 1983 renewal – and then came Burrough Hill Lad.

He’d won the Cheltenham Gold Cup in the spring and here he carried 12st to victory, conceding 21lb to Sun Alliance winner Canny Danny. It was a performance of the ages.

Galway Blaze landed a gamble in a common canter for Jimmy FitzGerald, Paul Nicholls, the unfathomably thin jockey version, went back-to-back on Broadheath and Playschool for a David Barons team in their prime.

Strands Of Gold won for Martin Pipe, Sibton Abbey beat no less than Jodami despite being 21lb out of the handicap and only getting 2lb from the runner-up. One of those races that defy logic.

One Man routed Lord Relic et al in 1994 then Suny Bay justified favouritism in 1997 despite a bad mistake at the fourth and the persistent challenge of Barton Bank.

And all of this before the turn of the century.

But since then? Well, one horse has cast a large shadow over the race. Here are the five best winning performances with Timeform in the current millennium. Denman fans – enjoy.

This was as good as it got for Diamond Harry over fences but it was still some peak. A Grade One-winning novice hurdler, he took to the larger obstacles well, winning his first two starts before pulling-up in the RSA at Cheltenham.

He began his second season chasing at Newbury and travelled sweetly throughout under a fresh-faced Daryl Jacob. But they don’t just hand you a Hennessy. Having mastered the behemoth that was Denman between the third and second-last, he suddenly had a new threat with Barry Geraghty conjuring a rare charge from Burton Port. He looked a real danger going to the final fence but Jacob was calm and his partner strong, Diamond Harry going to on to score by a length-and-a-quarter.

He was never to win again having sustained an injury shortly after this race.

A display to savour as Smad Place proceeded to run his rivals ragged under Wayne Hutchinson. He was in front by the ninth fence and stayed there. He took lengths out of the field at his fences, and two out it was clear he’d need to stop for them to have a chance.

It never looked likely and Alan King’s charge powered on to slam Theatre Guide and First Lieutenant by 12 lengths and a neck, earning a lofty Timeform rating in the process. He never topped it, but did win a Cotswold Chase the same season and the Old Roan at Aintree in the autumn of 2017.

This is how it’s meant to be isn’t it? The RSA Chase winner landing the Hennessy before going to take the Gold Cup at Cheltenham in March. He had an official rating of 160 and 11st 6lb on his back at Newbury, and produced a vintage display.

Travelling and jumping sweetly, he tracked the leader First Lieutenant to the final fence before quickly settling matters on the run-in. Tidal Bay, representing the old guard and during his Paul Nicholls reinvention, chased him home but was no match for an upwardly mobile rival.

A good day for the race.

Here we go again. This is how it’s meant to be isn’t it? The RSA Chase winner landing the Hennessy before going on to take the Gold Cup at Cheltenham in March.

He arrived for his first shot at the Newbury showpiece on his reappearance after an unbeaten five-race novice chase season. He had 11st 10lb to carry in deep winter ground and was simply sensational.

Rarely has a Hennessy been won so far out, once he was committed with five to jump they were chasing a giant shadow. 11 lengths was the winning margin over Dream Alliance and we knew we’d witnessed something special.

That March he was too strong for Kauto Star at Prestbury Park and 'Denmania' had reached fever pitch. The horse hadn’t.

It was a performance that epitomised – and capped – his career. Jumping boldly and in the van throughout, he fought tenaciously when stablemate What A Friend, in receipt of 22lb, tried to spoil the party.

To put it into even greater context, the runner-up went on to win the Grade One Lexus Chase and Aintree Bowl on his next two starts.

It was a performance that’s rightly gone down in Hennessy – and National Hunt racing – folklore. One of the days that will never fade.