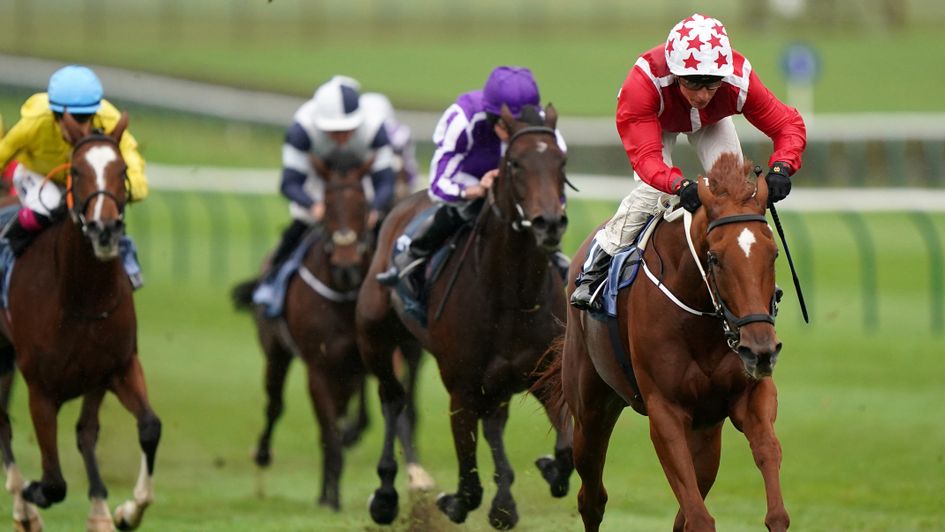 Saffron Beach routs her rivals in the Sun Chariot

Saffron Beach claimed her first Group One prize with an impressive display in the Kingdom Of Bahrain Sun Chariot Stakes at Newmarket.

Jane Chapple-Hyam's stable star has a fine record on the Rowley Mile and led the group racing down the far side of the track throughout.

Two furlongs out it was clear she was in control of the race full stop - powering home under William Buick to score by three lengths.

Mother Earth, who beat the winner into second in the QIPCO 1000 Guineas, came home for second without landing a telling blow with Dreamloper another late closer in third.

Chapple-Hyam said: “She has trained well the last month and this was our goal a long way out. We took the Group Three in at Sandown as a confidence boost for her and it has paid off.

“I will just enjoy today and worry about the rest of the year on Monday. It is definitely extra special to win my first Group One in Newmarket as I’ve been here since I left school at 17. It has been a long time. I was a student that started at the National Stud and have worked my way through to where I am today.

“The race seemed to go like two miles not one mile. It was a hard slog that last furlong but I’m proud of her. It is good to get the Group One next to her name.

“She has knocked on the door in the Guineas and now she has gone and done it today. I’m really pleased for the connections. We knew there was a Group One for her and today was the day. You don’t mind waiting if they do it.

“I left it up to William what he wanted to do as she tough, fit and strong. He asked me and I said, ‘I will leave to you as you are the maestro’. I’ve had a few seconds but never a Group One. She deserved that as it has been a long season.”

Although it was Derby winning rider Buick taking all the plaudits in the saddle the jockey was quick to praise Saffron Beach’s regular partner Adam Kirby, who was required to be in action at Ascot.

Buick, who was the fourth different jockey in as many races to ride the talented filly, said: “She was a nice spare ride to get and when the rain came it became even more interesting.

“She is Adam Kirby’s ride and he had to go to Ascot today. It is unfortunate for him, but he called me this morning and told me a lot about her so thanks to him. She is just a very uncomplicated filly who gets the mile well. Her stamina came into play and she has proven in the past she handles this track well. She is a very good filly.”

As for the runner-up, Mother Earth’s connections were pleased with her effort in defeat and have not ruled out the prospect of her running again this season.

Kevin Buckley, spokesperson for owners Coolmore, said: “She tries her heart every single time. She always shows up as the form suggests and it was another good run.

“She was beaten by a good filly and I’m delighted for Jane to have her first Group One. They are getting their toe in now but that is not an excuse.

“We will talk to Aidan tomorrow and see what he says but I don’t see any reason to suggest why she would stop now. That is up to the lads if she races on next season. She has danced a lot of dances but she will tell us what she wants.”