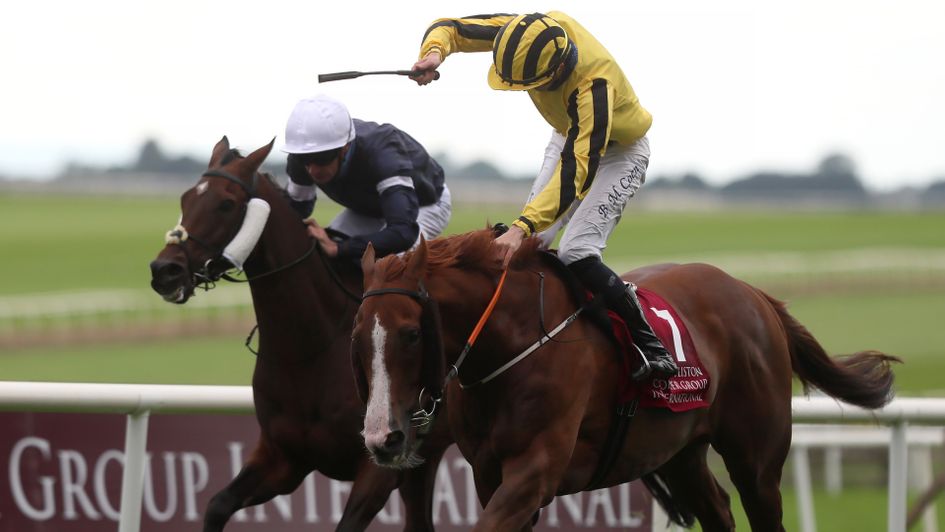 Just over three weeks on from his lucrative handicap success at York, Johnny Murtagh’s charge stepped up to Group One level for the first time under Ben Coen.

The leader weakened early in the home straight, which left Melbourne Cup winner Twilight Payment in front before Sonnyboyliston (4/1) arrived on the scene travelling strongly.

Twilight Payment did not give in without a fight, but Coen’s mount kept finding for pressure and was three-quarters of a length to the good passing the post.

Coen said: “I couldn’t have asked it to go any better. We jumped and he got a lovely tow into the race. They turned it into a real staying race and this lad keeps improving and keeps finding a way to win.

“Every day we step him up, he keeps on finding and it’s a day I’ll never forget.

“This is my first proper year as number one jockey to Johnny and we’ve had a few good spins in England, but I really wanted to get this Group One winner.

“For it to be a Classic and for Johnny is unbelievable.”

Murtagh, who won the race as a jockey when dead-heating aboard Jukebox Jury a decade ago, said: “On Friday I was bullish about the weekend and then after yesterday’s runners, I came here thinking we had a little chance.

“He was one of our best runners of the week, he never disappoints and I thought he did very well to win today – it looked like a proper race.

“I was a nervous wreck beforehand, but he had a good position all the way. He comes off the bridle, but I thought from two furlongs down Ben looked confident on him. He got into a bit of a battle, but he never lacks in a battle and I thought Ben was brilliant.

“I want to have runners on Irish Champions Weekend – it’s great to sit down and make entries in these great races.

“This horse has won an Ebor and has now won an Irish St Leger – I can’t say enough about him.”

He added: “Racing is a great game and a great leveller. You can never get too high or too low.

“I’m just the front man to a lot of people who do a lot of hard work. JP Murtagh Racing – I’m so proud of everybody.

“It means a lot to win a Classic at your local track.”

Asked whether the Melbourne Cup could be on the agenda, Murtagh said: “I don’t know. I think it will take a fair offer to take him away from the owners now.

“But it is £2.5million. Maybe not this year as he’s only four, but maybe he could end up down there for us sometime.”