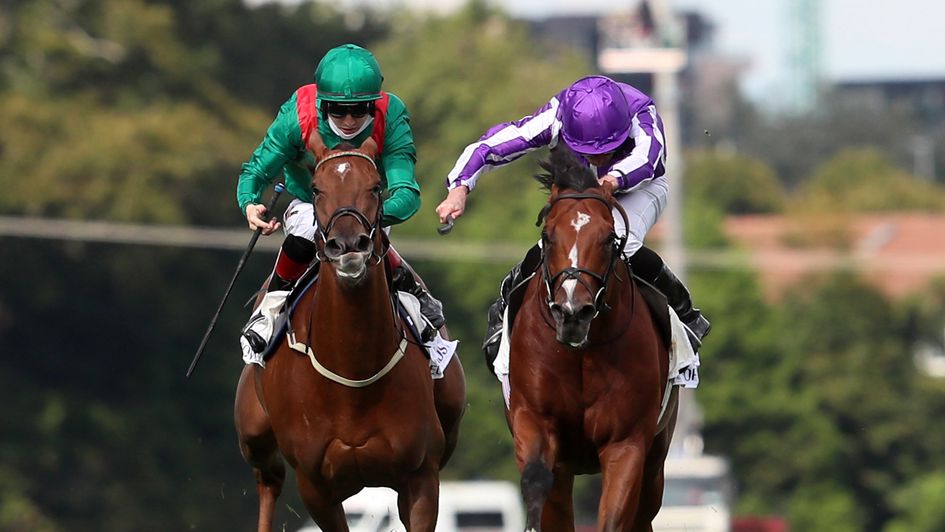 St Mark's Basilica gets the better of Tarnawa

Read Timeform's report of an Irish Champion Stakes thriller, which was won by St Mark's Basilica but may also have featured the 2021 Arc winner.

The smallest field assembled for the Irish Champion Stakes since it returned to this track following the closure of Phoenix Park in 1991, and the first time since 2009 that it lacked an overseas runner, but a fascinating renewal nonetheless, the quartet that took part having amassed 9 Group 1 wins between them; a rather tactical affair, it wasn't short of drama, St Mark's Basilica needing to survive a stewards inquiry having carried the runner-up all the way across to the stand side, the winning margin of three-quarters of a length undoubtedly making their decision a bit easier.

St Mark's Basilica strong in the betting once again, produced another borderline top-class effort to add his name to a select list of horses to have won 5 Group 1s on the spin, hard to argue that he wasn't the best horse on the day but it wasn't all plain sailing, having to work hard to get to Poetic Flare in the final 1f and then needing to dig deep to hold off Tarnawa after carrying that one all the way across the track; mid-division, ridden early in straight, edged ahead entering final 1f, hung right, stuck to task; future plans are fluid with connections reportedly not keen to risk him on very soft ground.

Tarnawa, an impressive winner on her reappearance at this track last month, lost nothing in defeat back down in trip, producing a career best to split a pair of classic-winning colts, that despite being carried across to the stand side by the winner; dropped out, driven early in straight, carried right final 1f, kept on well, took second on line; a likeable mare who handles any type of ground, she will take plenty of beating in the Arc next month.

Poetic Flare is as tough as they come and ran right up to his very best, as expected having no problem with the longer trip, albeit in a race where the emphasis was on speed, giving best only late on and losing second on the nod; chased leaders, quickened to lead briefly 1f out, kept on; a credit to connections, he is sure to give another good account if allowed to take his chance in the QEII at Ascot next month, a potential clash with Baaeed and Palace Pier there a mouthwatering prospect.

Patrick Sarsfield, placed at this level on the continent last year, ran about as well as could have been expected in this company, having no answer when the big 3 swept past early in the straight; made running, headed over 1f out, left behind soon after, not persevered with once chance had gone.