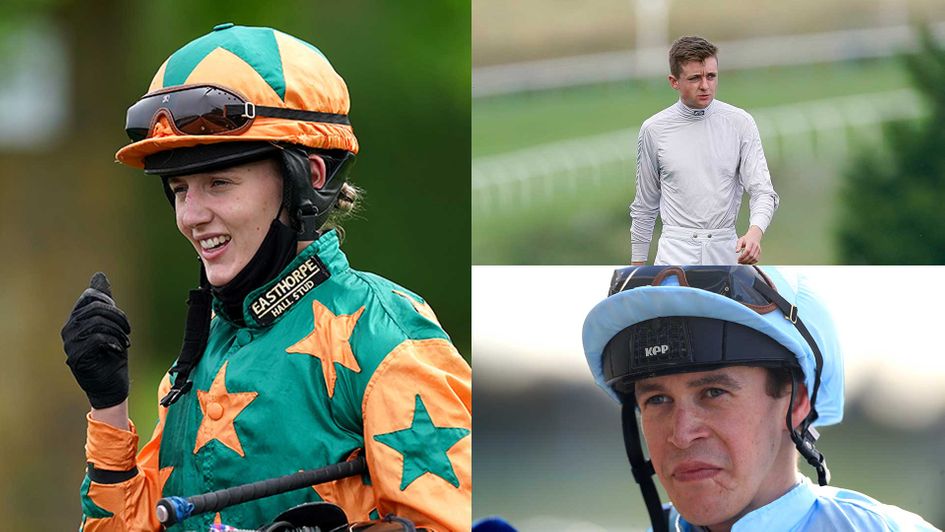 Adam Farragher struck up a fine relationship with William Haggas

Adam Houghton profiles three apprentices who could have big futures after enjoying a productive campaign on the Flat in 2021.

Oisin Murphy was crowned the champion Flat jockey in Britain for the third year in a row last Saturday, finally coming out on top after a gruelling battle with William Buick, a head-to-head spanning 24 weeks and a grand total of 1,420 rides between them.

153 was the all-important number for Murphy at the end of it all, clinging on to beat Buick by two winners, a margin of victory which had threatened to be much wider for most of the campaign. For context, Buick partnered eight more winners than Murphy in the two weeks leading up to Champions Day, but it was ultimately too little too late and the fate of both men was sealed when Buick failed to win the penultimate race at Ascot, the Champion Stakes, aboard Derby winner Adayar.

It may have been too close for comfort at the end, but there is no doubt that Murphy was a thoroughly deserving winner of the 2021 jockeys’ championship, running from the start of the Guineas Festival at Newmarket (May 1) to Champions Day at Ascot (October 16).

Not only did Murphy ride the most winners during that period, but he also had the best strike rate (21.76%) of any jockey who had at least 90 rides on the Flat in Britain. He was out on his own by Impact Value, too, a statistical technique which calculates winners compared to random chance. Anything above 1 is good, so a figure of 1.86 for Murphy is particularly impressive.

None of that will come as a surprise given that Oisin Murphy, William Buick and James Doyle are widely regarded as three of the best jockeys of their generation. Instead the focus of this article is to identify a couple of less-heralded riders who made an impact on the Flat during the latest season and could be worth looking out for both on the all-weather this winter and back on turf in 2022. 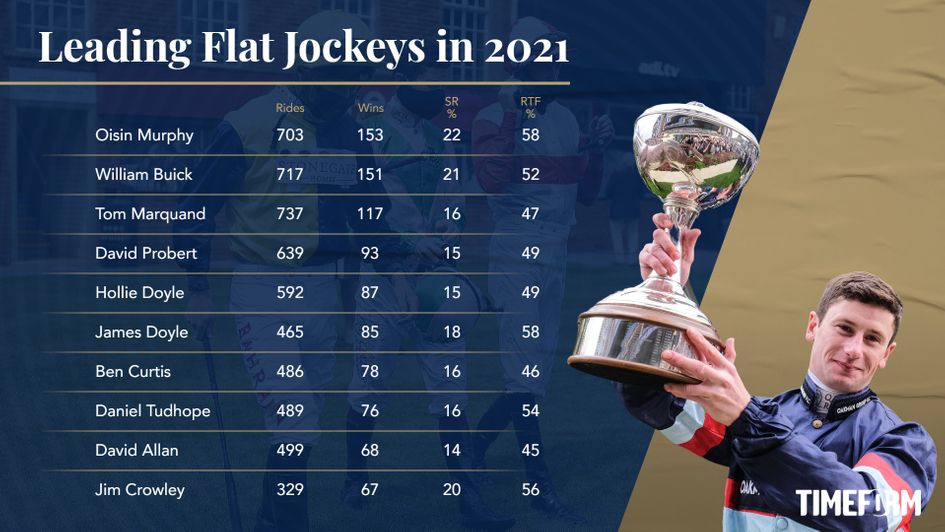 That brings us back to the promising apprentice Adam Farragher, who topped the charts by run to form percentage (must have had at least 90 rides to qualify), underlining his ability to get the best out of his mounts on a consistent basis. He also ranked ninth by Impact Value and twentieth by percentage of rivals beaten.

Farragher had a record of 12/37 when teaming up with Haggas during the course of the 2021 jockeys’ championship. Three of those winners came on the same card at Chester earlier this month, when another winner trained by James Fanshawe gave the jockey the first four-timer of his career. Mick Appleby, Robert Cowell and Michael Dods also provided him with one winner apiece to take his overall record in Britain to 16/99.

With a Timeform rating of 114, Montatham is the best horse Farragher has ridden in his career to date, guiding him to sixth place in a valuable handicap at York’s Ebor Festival. Farragher can surely look forward to more rides of that ilk next season given the strength in depth at Haggas’ yard, while he can also count Charlie Appleby and Saeed bin Suroor amongst his admirers having ridden in the Godolphin blue for both trainers in 2021.

Farragher’s claim will be reduced to 3lb when he reaches 50 winners, so it will be interesting to see whether he is kept busy on the all-weather this winter or whether the decision is made to preserve the lion’s share of his claim for the more valuable turf handicaps in 2022. Either way, he has clearly made a very promising start to his career and seems destined for a bright future. 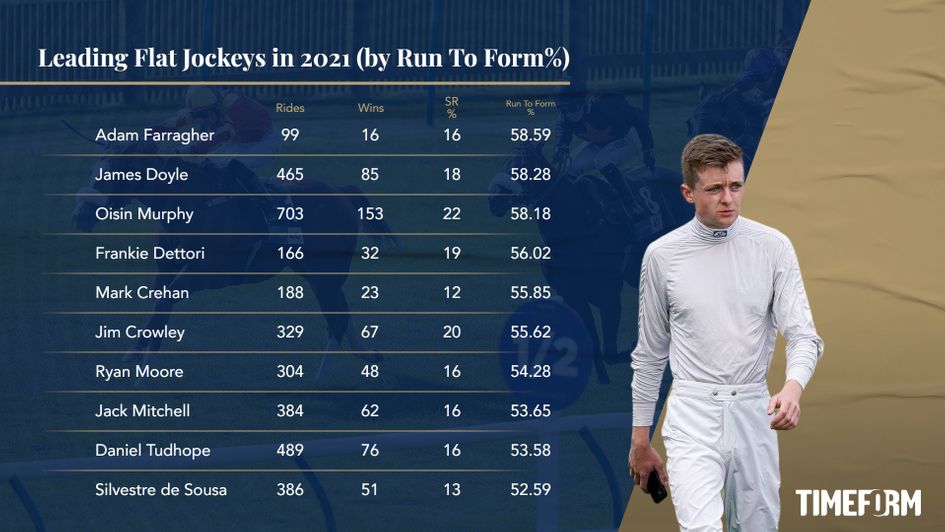 Similar comments apply to Mark Crehan, another apprentice ranked fifth by run to form percentage and seventh by percentage of rivals beaten.

Crehan had just one ride for George Boughey in 2020, but it’s fair to say that his budding association with that yard has caused a major upturn in his fortunes this year. Indeed, Crehan piloted 13 winners for Boughey before the jockeys’ championship had even begun and another seven followed between May 1 and October 16. The undoubted highlight came at Epsom on Oaks day, when partnering the useful two-year-old Oscula to a dominant success in the Woodcote Stakes.

Newmarket trainers Sir Michael Stoute and Ed Dunlop have also provided Crehan with a handful of winners in 2021. With a Timeform rating of 109, the Stoute-trained Aerion Power is the best horse Crehan has ridden to date, though it’s debatable whether the young jockey will have fond memories of their time together. After all, Crehan received a 28-day ban for the ride he gave Aerion Power at Doncaster in July, when throwing away certain victory by mistaking the winning post.

Crehan was back amongst the winners when guiding Mr Professor to victory in a nursery at Bath in September, ending a 57-day losing streak after returning from his enforced break. He has kicked on again since with four winners already on the board in October at the time of writing.

In total, Crehan has ridden 65 winners since taking out his licence, so he still has another 30 to go before he loses his claim completely. Boughey was particularly active on the all-weather last winter and Crehan himself has racked up 33 of his 65 winners on that surface, so expect him to have a busy time of things in the coming months. 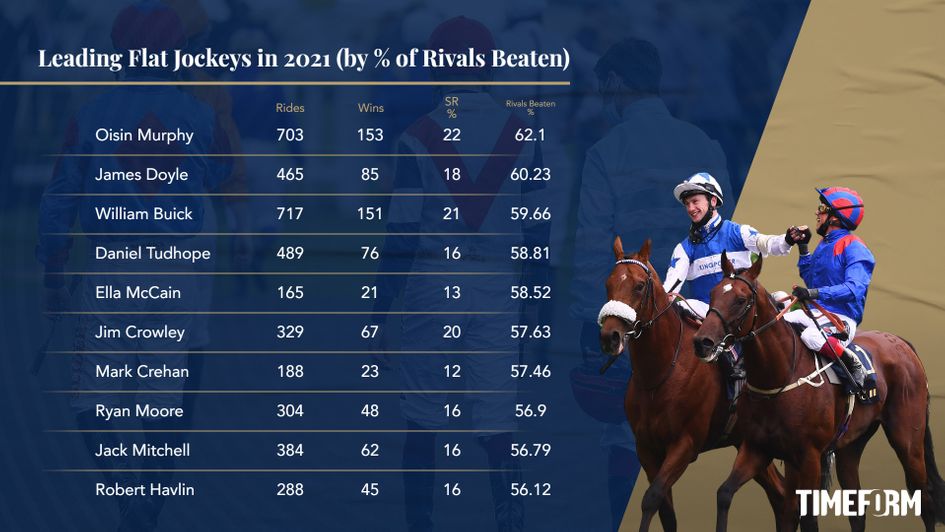 Another young apprentice who achieved some notable results during the course of the 2021 jockeys’ championship was Ella McCain, who had a record of 21/165 for that period. Crucially, McCain ranked fifth by percentage of rivals beaten and eleventh by run to form percentage, identifying her as a rider who is essentially very good value for her 5lb claim.

2021 is the year in which things have really taken off, though, as McCain has more than doubled her career tally of winners. She had a fine record of 5/24 when riding for her father between May 1 and October 16, but it was her association with the Tim Easterby yard which was most productive during that period, yielding 12 winners from 108 rides. That tally included two doubles in the space of eight days in May, both at Catterick.

Incidentally, Catterick is the track where McCain has enjoyed the most success during her burgeoning career, with eight winners from 27 rides (30% strike rate). She has also partnered three winners from only seven rides at Musselburgh (43% strike rate).

McCain had the pleasure of riding Copper Knight during the latest season, a popular veteran trained by Easterby. The pair nearly pulled off a victory at Haydock in September, losing out by just a head at the line, and Copper Knight has the distinction of being the best horse McCain has ridden with a Timeform rating of 109.