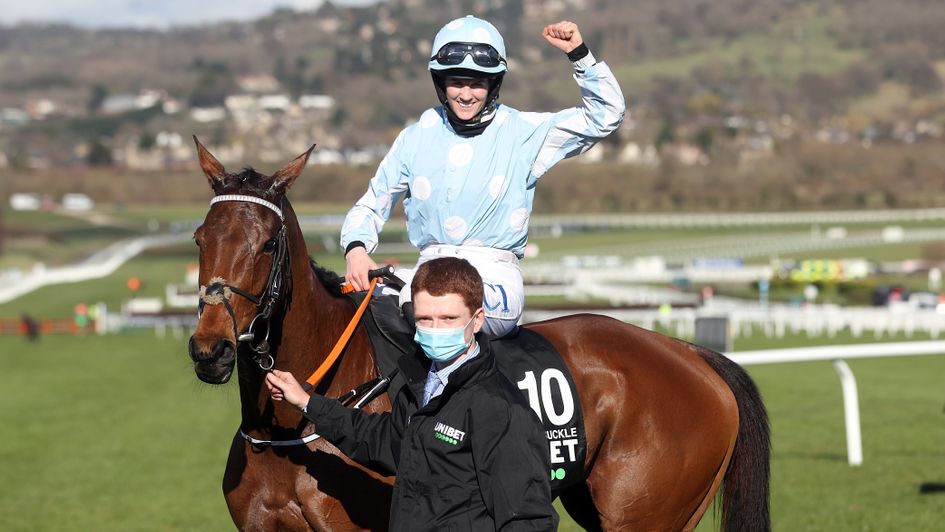 Honeysuckle and Rachael Blackmore rule the roost at the moment

Honeysuckle heads 23 entries for the Unibet Champion Hurdle at the Cheltenham Festival.

Henry de Bromhead’s brilliant mare is already odds-on to retain her title and extend her perfect record under Rules which stands at 13 after she made a successful reappearance in the Hatton’s Grace Hurdle at Fairyhouse in November.

She is likely to head to Leopardstown next month in search of a third successive Irish Champion Hurdle before going back to Cheltenham. De Bromhead also has last year’s Triumph Hurdle victor Quilixios and Aspire Tower in the list.

Leading the likely opposition is the Nicky Henderson-trained Epatante, who was third last spring having lifted the crown in 2020.

The eight-year-old mare has made a good start to this campaign with a dead-heat in the Fighting Fifth at Newcastle and outright victory in the Christmas Hurdle at Kempton.

“It has gone very well with Epatante so far,” Henderson said.

“JP (McManus, owner) said what happens in March will be difficult but we have got two objectives at the beginning of the season – the Fighting Fifth and the Christmas Hurdle and they are going to be our Champion Hurdles.

“We had to halve one but we won the other one very well, so we have in many ways achieved our objectives. I think she has performed to a very high level. At Kempton, she was nearly as good as she has ever been.

“Now, it is a couple of years on since she won the Champion Hurdle and a certain Honeysuckle has appeared on the scene in the meantime.

“I’m the first to admit it – the Champion Hurdle was a stronger race last year but we weren’t at our best and we still finished third.

“We’ve got a lot of ground to make up and have a big task ahead of us. There is a lot of kudos at being placed in Champion Hurdles, let alone winning one. There is not much else for her to do, to be honest with you.”

He added: “She will go to the racecourse in the meantime but I very much doubt she will have another run as she doesn’t need one.

“Yes, she will have a racecourse gallop and that will fit in accordingly.

“She might go twice and have one on the grass and one on the all-weather when we take that squad to Kempton 10 days before Cheltenham.

“It is just a nice away day for them where they can enjoy themselves.”

Henderson also has Buveur D’Air, winner in 2017 and 2018. He also has an entry in the Paddy Power Stayers’ Hurdle.

“I’m going to bowl a bit of a googly here as we have entered Buveur D’Air as well,” said the Seven Barrows handler.

“He hit a problem after Aintree and then he couldn’t go to Punchestown, so they have been repairing the issue in Ireland. We are all looking forward to seeing him back.

“He has been doing lots of work in Ireland and they have made sure everything is in good working order, which apparently it is.

Sharjah, second to Honeysuckle in 2021 and to Epatante in 2020, is likely to try to go one better after his fourth consecutive win in the Matheson Hurdle at Leopardstown over Christmas.

His trainer Willie Mullins has a total of four entries, including Appreciate It, who has not raced since winning the Supreme Novices’ Hurdle at last year’s Festival, plus Saint Roi and Echoes In Rain.

“You can forget about the Gold Cup last year. He had a problem but we’ve ironed that out. The balls are up in the air.

“Ante-post markets have to be respected, but I can’t make decisions just to help things on that score.

“He is in both and they are both mega prizes. The Gold Cup is the blue riband, but the Stayers’ Hurdle isn’t bad either.”

Of Buveur D’Air, who has also been entered for the Champion Hurdle, he added: “We’ve put him in the Stayers’ Hurdle as well as his run over two-and-a-half at Aintree was a staggeringly good run.

“He tanked through the race and he got there too soon as his lead horse went over at the last on the far side.

“That left him with no cover and he tanked off. He was having such good fun. He showed us that day there is all sorts of life left in him.”

Thyme Hill, who was just under two lengths behind Champ when second in the Long Walk, is a likely runner for Philip Hobbs.

Emma Lavelle’s Paisley Park and the Rebecca Curtis-trained Lisnagar Oscar, who won the Stayers’ Hurdle in 2019 and 2020 respectively, also feature.

Willie Mullins is responsible for eight of 28 initial entries for the Close Brothers’ Mares’ Hurdle.

Ireland’s perennial champion trainer has saddled nine previous winners of the Grade One contest, with six of those victories provided by the brilliant Quevega.

Mullins appears intent on adding to his tally, with recent Relkeel Hurdle winner Stormy Ireland and Burning Victory, a former winner of the Triumph Hurdle, two of his leading hopes.

Telmesomethinggirl won the Mares’ Novices’ Hurdle at last year’s Festival and could return for Henry de Bromhead, with Peter Fahey’s Royal Kahala and Paul Hennessy’s Heaven Help Us other major players for Ireland.