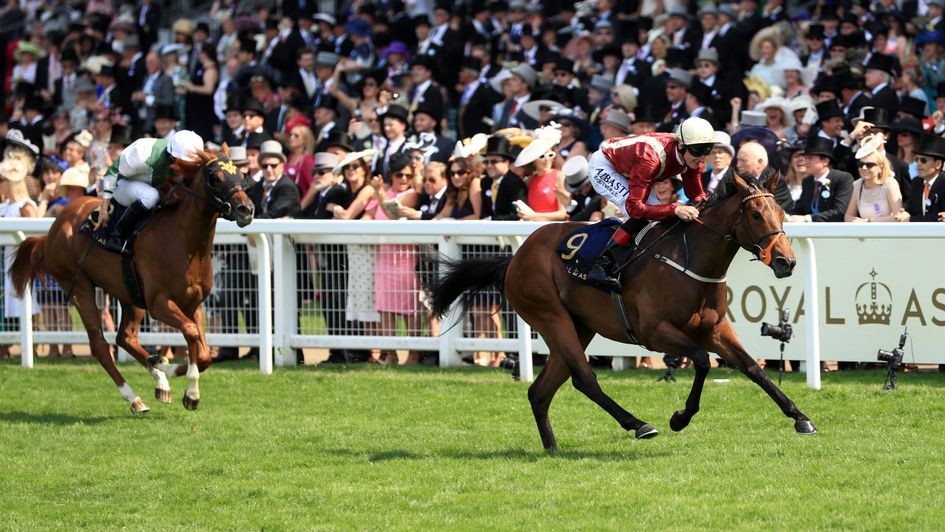 Heartache leaves Happy Like A Fool trailing in her wake

Heartache overturned hot favourite Happy Like A Fool to win the Queen Mary Stakes. Check out our race report, reaction from connections and free video replay.

Heartache overturned American hotpot Happy Like A Fool to win the Queen Mary Stakes for Clive Cox and Adam Kirby.

The daughter of Kyllachy tracked the odds-on market leader through the early stages and always looked to have her covered, going to the front over a furlong out.

She soon bounded clear and went on to score in impressive fashion by two-and-a-half lengths. Happy Like A Fool held on for second with Out Of The Flames battling on gamely for third.

Those who raced towards the stands' side dominated proceedings with nothing drawn low managing to land a blow.

Adam Kirby: "She's good isn't she? She has loads of class - when she won first time out I knew she had loads of class but she's come on again from there. I'm delighted for Clive as he's a great trainer and doesn't get enough credit.

"There was no plan, Clive just said to go where I was happy but I was pleased to get in behind one. She's got a big future, she's very special."

Clive Cox: "That was very good and it means a lot to me. She's very special and she did it really well at Bath - I could not believe the time at Bath when they announced it. She's no different from the rest of mine in that they improve with their racing.

"We won a Listed race with her mum (Place In My Heart), so this is very special, watching it with the owners as there's all manner of people here. It's a proper achievement."

"She's easy to train, she's got a good temperament but we're not quite sure how good she is. I was a bit worried when I saw the American filly as she looked pretty awesome walking around the paddock.

"Adam rode her with complete confidence and he's a pretty good fellow in the saddle. These are the stars of the future and she certainly is. We'll enjoy today as she could be that good and go for the Nunthorpe."

Wesley Ward: "Ryan (Moore) said she was just beaten by a better filly and watching the race I agree.

"She broke as well as my others and she was there when he called on her, but the other filly had a little more.

"Hopefully we can turn the tables as they are all young two-year-olds even though mine are forward. She's a big filly and will make up into something special. She'll go for the Molecomb and this just put her forward for that."

Richard Hannon, trainer of Out Of The Flames: "That was a super run, there's a big day in her one day and we'll have a look at the Prix Robert Papin or something like that."