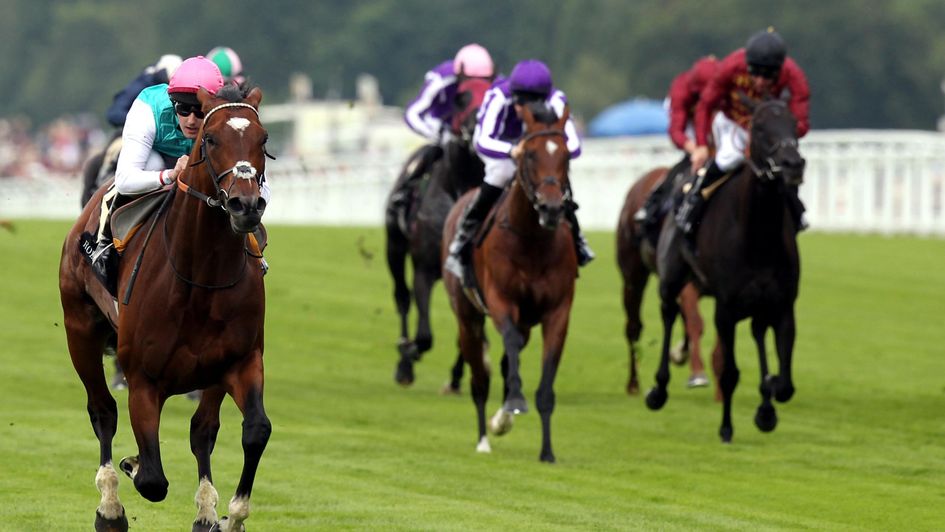 Tony McFadden highlights the best five performances at Royal Ascot this century based on Timeform ratings.

No horse since Timeform was founded in 1948 has put up a better performance than the one produced by Frankel in the Queen Anne Stakes on the opening day of Royal Ascot in 2012. Frankel had already established himself as an outstanding racehorse prior to Royal Ascot - he has been successful on all 10 starts - but he broke new ground in the Queen Anne, overhauling Sea-Bird at the head of Timeform's rankings. Frankel handed out an astonishing 11-length drubbing to Excelebration - a top-class racehorse in his own right who is among the ten best trained by Aidan O'Brien. The way Frankel loomed up off a strong gallop before instantly accelerating clear was simply sensational.

There haven't been many horses more talented than Dubai Millennium - only seven have bettered his career-best figure of 140 - but a remarkable aspect of his story was that he was capable of showing outstanding form on dirt and turf. Dubai Millennium earned his rating of 140 when smashing the clock in the Dubai World Cup but he wasn't far below that level when turning what was supposed to be a great clash in the 2000 Prince of Wales's Stakes into a procession. Sendawar, a multiple Group 1-winning miler, was below his best, but he wouldn't have been able to live with Dubai Millennium in any case as the Godolphin colt - ridden by Jerry Bailey - piled it on from the front with a relentless display of galloping.

Manduro was admirably consistent as a four-year-old in his first campaign for Andre Fabre after joining from Peter Schiergen, finishing placed on all five attempts in Group 1 company, including when third behind Ouija Board in the Prince of Wales's Stakes. He made amends for those near-misses the following year, however, winning three times at the highest level, with the most memorable display coming in the Prince of Wales's Stakes when readily brushing aside a top-class rival in Dylan Thomas. Manduro showed a fine turn of foot to quicken into the lead, and he was always holding on under a largely hands-and-heels ride. It was an excellent edition of the Prince of Wales's Stakes as Tattersalls Gold Cup winner Notnowcato, Breeders' Cup Turf winner Red Rocks and the previous season's Derby winner Sir Percy were all in opposition, but they were left trailing as Manduro and Dylan Thomas pulled clear inside the final couple of furlongs.

Fantastic Light is best remembered for his stirring battles with Galileo - he came off second best in the King George and then reversed the form in the Irish Champion Stakes - but before those titanic tussles he had put in a dominant display in the Prince of Wales's Stakes. Fantastic Light had endeared himself to the racing public with a number of high-class efforts around the globe, but his Prince of Wales's success represented a new high. Fantastic Light tended to race lazily in the early part of his career, but by the summer of 2001 he was travelling fluently, and this enabled him to raise his game. He was always going strongly at Royal Ascot and, despite being short of room on the rail a couple of furlongs from home, he picked up instantly when angled for a run, readily passing Kalanisi and bounding two and a half lengths clear.

Canford Cliffs had the misfortune of being around at the same time as some exceptional milers, but only the imperious Frankel was definitely his superior. Canford Cliffs produced a scintillating turn of foot to take the scalp of Rip Van Winkle in the Sussex Stakes on his final start as a three-year-old and he got the better of the legendary Goldikova in the following season's Queen Anne Stakes at Royal Ascot. Goldikova, who by this stage was a three-time Breeders' Cup Mile winner, was sent off a narrow favourite, but Canford Cliffs was always going well in behind and produced his trademark turn of foot to sweep into the lead a furlong out. Goldikova dug deep and tried to rally but Canford Cliffs was always on top and scored by a length.