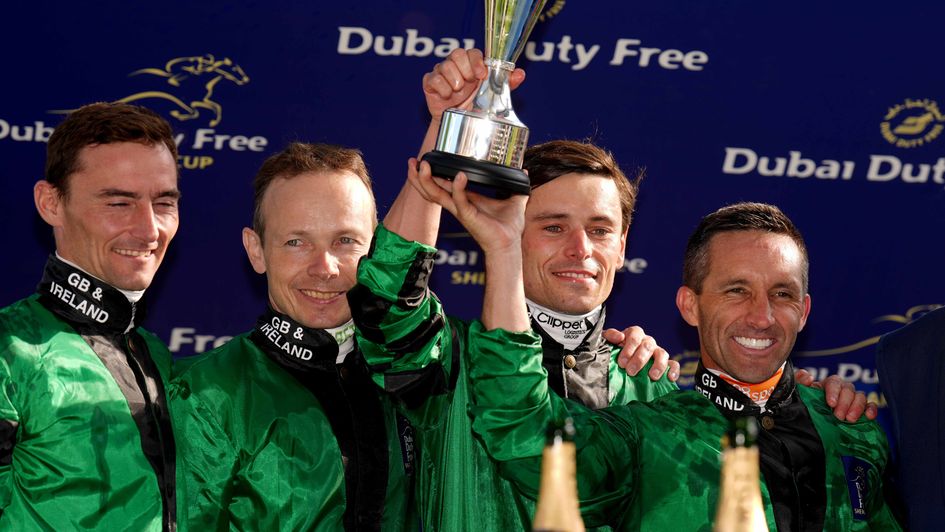 Celebration time for the Great Britain and Ireland team

Great Britain and Ireland dominated the Dubai Duty Free Shergar Cup at Ascot, winning five of the eight races to claim the trophy for the first time since 2017.

The home team, who finished over 50 points clear of defending champions the Ladies in second, had the multi-team event wrapped up before the last – but the race for the Alistair Haggis Silver Saddle awarded to the leading rider went right down to the wire.

Jamie Spencer had earlier ridden a double on the card, but was matched by teammate Neil Callan, who only had to finish in the points in the finale but ended the day in style by scoring aboard Adaay In Asia to add to his earlier victory aboard Orbaan.

Team captain Spencer said: “Everyone is happy and it was good fun. I think everyone enjoyed themselves. It has been a good day. I looked at the paper last night and thought we had some good chances. Sometimes it doesn’t materialise like that, but Themaxwecan was an outsider yesterday evening and he ended up being a 9-1 chance.

“The Shergar Cup has been going 20-odd years, so if it has been going that long, it generally works. If it doesn’t, it won’t last that long. It is a family day out. Maybe it is not for the purist, but they put good prize-money on and if the owners are happy they are getting paid well to run their horses. So, what more can you want. The jockeys like it – it is just a nice day at work.” 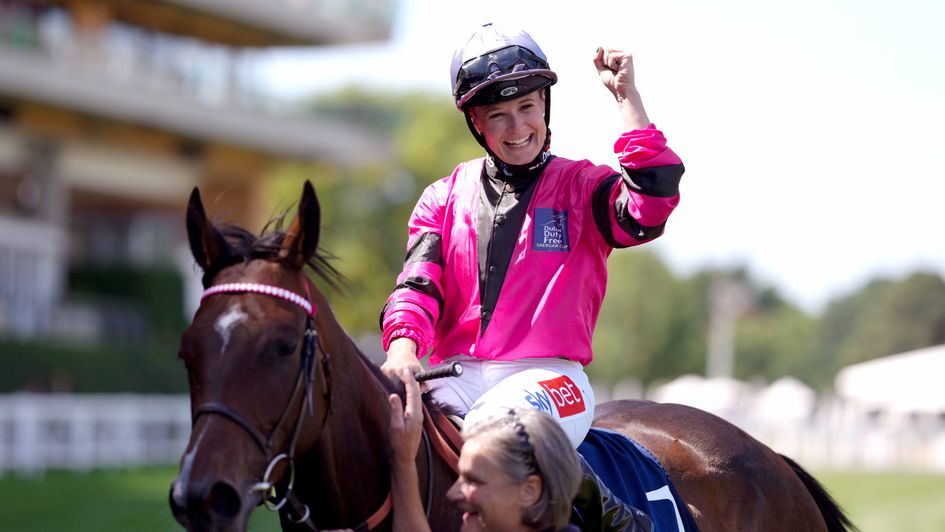 Joanna Mason, riding as a replacement for Hollie Doyle, got the Ladies team off to the perfect start when steering William Haggas’ Amanzoe to victory in the Dubai Duty Free Shergar Cup Curtain Raiser Classified Stakes.

“It’s a long old straight here, isn’t it?!,” said Mason. “She was brilliant and gave me a great feel. I was coming down here just hoping I could do everything right and do the girls proud.”

Haggas said: “She won very nicely and has been given a perfect ride. One of the reasons the Shergar Cup is so successful is that it gives everyone a chance to meet a few foreign jockeys. It is a real global event and it is terrific that the girls have got a good start. Jo has proven that, given the right ammunition, she is just as good as anyone.”

He added of his winner: “I think we have to go to stakes races now. She has won off 90 today and will go up to about 94 of 95. She likes fast ground, though. She has had five runs in about five weeks, it seems. We will have to think about whether she has a break or not.”

The Shergar Cup’s two most experienced jockeys fought out the finish of the Dubai Duty Free Shergar Cup Dash as Hayley Turner aboard the 7-2 favourite Manaccan just held on from the Frankie Dettori-ridden Judicial for Europe.

The two-time Silver Saddle winner was enjoying her ninth winner in the event – making her the winning-most rider – and gave the Ladies their second win.

“It is so good to get a winner here. The Ladies have had a good start so far,” she said. “John Ryan rang me the other day and said he quite fancied Manaccan. It really did go smoothly.”

There was then a third victory for the ladies and a fourth Shergar Cup winner for Emma-Jayne Wilson when she guided Jessica Harrington’s Jungle Cove (14-1) to victory in the Dubai Duty Free Shergar Cup Mile.

Given a patient ride from the Canadian, the five-year-old was pushed out for an easy success.

Harrington said: “It was the first time I have had a runner in the Shergar Cup and it was a fairytale ending. I’m thrilled with him. I was delighted when he got in, because he needed four or five to come out. He will go on any ground – he is just one of those horses. I’m all for the team concept. I am delighted we got a win for the girls. It was very well planned.”