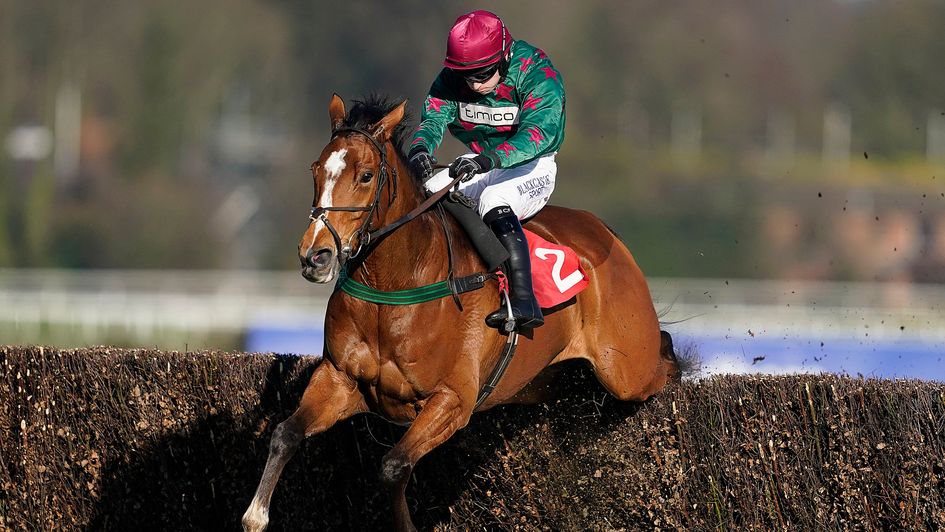 Glen Forsa is out on his own at Sandown

Rescheduled following the abandonment of racing at Warwick last week due to the outbreak of equine influenza, the Grade Two contest attracted just four runners - and that number was reduced by one after Dalila Du Seuil was withdrawn at the start.

Kalashnikov - runner-up in the Supreme Novices' Hurdle at the Cheltenham Festival last March - made a fine start to his career over fences with successive victories at Warwick and Plumpton. Amy Murphy's stable star was beaten by the now-sidelined Dynamite Dollars in the Wayward Lad Novices' Chase at Kempton on his most recent outing, but was nevertheless the 1-4 favourite to bounce back to winning ways under Jack Quinlan.

The Mick Channon-trained Glen Forsa was stepping up in grade following handicap triumphs at Chepstow and Kempton and was immediately sent to the front by Jonathan Burke, with Kalashnikov on his tail for much of the two-mile journey.

The pair went at it racing down the back straight and it was Glen Forsa who was much the slicker in the jumping department, propelling him into a clear lead rounding the home turn. It was soon clear Channon's 7-2 chance had the odds-on favourite's measure and he safely negotiated the remaining two obstacles to seal a most impressive 19-length victory, which saw Paddy Power cut him to 8-1 for the Arkle and 6-1 for the longer JLT Novices' Chase at Cheltenham next month.

Glen Forsa wins the Kingmaker, making it three for three over fences for @Mick_Channon and @JohnnyBurke2 pic.twitter.com/IV5aQwsvZq

Jack Channon, assistant to his father, said: "That was very impressive. We've always thought he was very decent. I thought two and half miles was probably his trip, but I've been proved wrong today as he has got enough pace for the two miles He put a very good horse in Kalashnikov under pressure from a long way out and he jumped and stayed, and that won the day in the end.

"I think you would struggle not to look at the Arkle, but he is in that and the JLT and we will look at both and see how he comes out of this race and train him for Cheltenham. Either way we know we've got a nice horse to take to the Festival.

"He was still a baby at Kempton and has put on weight since then. He had a little setback which has tested us and the lass who rides him out every day has done a fantastic job. It is quite an emotional performance really, as we've worked very hard for that."

Sky Bet cut the winner to 8/1 from 20s for the Racing Post Arkle Trophy. Racing PR Manager Michael Shinners said: "All eyes were on Kalashnikov coming into this but Glen Forsa was the horse to lay down a significant Cheltenham marker."

Murphy said: "I think either way that was very disappointing. Jack said he didn't feel his usual self so we will go back and check him over and check we are not missing something. Take nothing away from the winner, he is a very nice horse and when I saw him canter down to post I thought 'what a lovely horse'. I'm delighted for them, but we will regroup with him.

Brodie Hampson fought back the tears after gaining an emotional second success in the Castel Royal Artillery Gold Cup at Sandown on Friday.

Having made her first ride in the three-mile race a winning one in 2016 when carrying the silks of her father Sergeant Mark Hampson - who sadly died later that year - to glory on aboard Jennys Surprise, the 24-year-old repeated the feat with the Ben Pauling-trained Carlos Du Fruitier.

With the hat-trick-seeking partnership of Rathlin Rose and Captain Guy Disney parting company at the second-last when mounting a challenge, the 7/4 favourite was left to see off Ludlow scorer Huff And Puff by two and three-quarter lengths.

Hampson said: "The plan wasn't to make the running, but with a circuit to go the pace was a bit on and off and I know he needed a good pace, so I thought 'we are going to have to take it up here and now, and you are going to have to help me out and I will help you out'.

"I definitely spread some more of his (father's) ashes at the winning line today and he was with me all the way, I know that. It was massively emotional - it is every time I come here.

"Dad was was in the Royal Artillery for 24 years, so it was a big part of his life and to come back here and do it again for him, he would be so proud.

"Next year hopefully we will get back into his colours again on another horse."

Gary Moore will soon be working out his team for the Cheltenham Festival and it could include Not Another Muddle after he earned a 16/1 quote for the Grand Annual, following a three-and-a-quarter-length success in the "Ubique" Handicap.

The Lower Beeding handler said of the 6/4 winner: "I think he is quite a nice horse and he might get an entry in the Grand Annual. I think that sort of race will suit him as they will go hard and he is a strong traveller.

After missing her first runner on the card following a delayed flight back from Geneva, trainer Venetia Williams arrived just in time to see Achille carry the colours of 2009 Grand National hero Mon Mome to glory in the starsports.bet Handicap Chase.

Williams said of the 4/1 winner: "I had a three-hour delayed flight and missed the first runner here. Hugh (Nugent) gave him a super ride. When they jump as well as he did they don't have to do much galloping."

Aintree could be on the agenda for the Colin Tizzard-trained Reserve Tank after he floored odds-on favourite Elusive Belle by two and a quarter lengths in the Dickie Pile 80th Birthday "National Hunt" Novices' Hurdle.

Tizzard said of the 5/1 scorer: "It was the right race for him and he beat quite a decent winner. He is not entered at Cheltenham. We will try to have another little race and if he runs well he could go to Aintree in the spring."

Copperhead (9/4) completed a double for Tizzard when following up his victory at Exeter with a four-length success in the starsports.bet Novices' Handicap Hurdle.