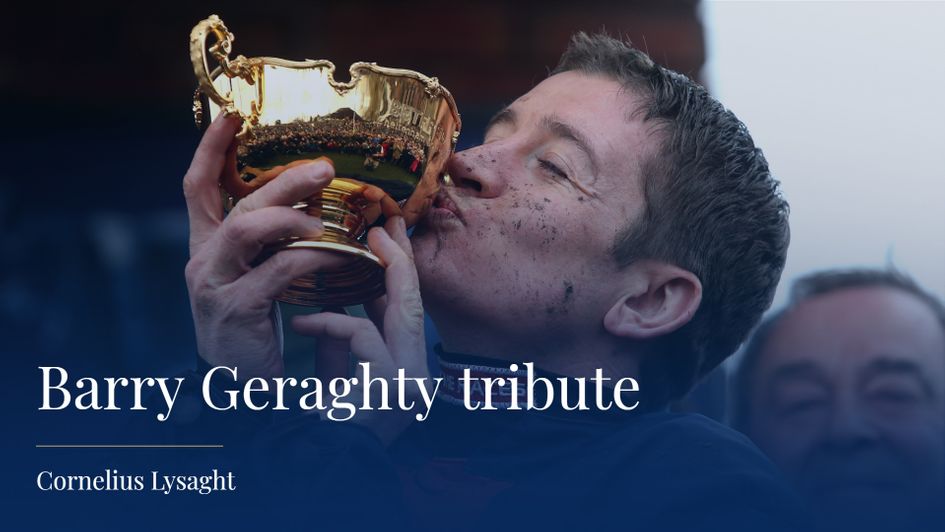 Barry Geraghty's retirement represents a true changing of the guard in the National Hunt weighing room - Conelius Lysaght reflects on his life in the saddle.

The portents that one day Barry Geraghty would scale the greatest national hunt heights year after year were perhaps there from the word go.

Geraghty was raised at stables in County Meath, Ireland where his grandfather, Laurence, bred Golden Miller, the legendary steeplechaser of the 1930s, with five Cheltenham Gold Cup successes to his name, one of them, in 1934, followed up by victory in the Grand National, still an unequalled feat in the same year.

Although the jockey may not have ever lifted jumping’s two most glittering prizes in the same season, both appear on a CV bursting with talented equine collaborators and outstanding winning content – so much of it acquired at successive Cheltenham Festivals – and one notable too for the sheer longevity of its listings.

During a genuinely golden era, when Sir AP McCoy and Ruby Walsh were lurking around every corner, and Richard Johnson and others still are, Geraghty held the most prominent of positions.

Monty's Pass (16/1) lands some hefty bets in 2003 under @BarryJGeraghty. Amberleigh House would return to win a year later.#GrandNationalDayMemories @AintreeRaces pic.twitter.com/LTEZ1aM5bg

He did it on Kicking King and Bobs Worth in the Gold Cup; Monty’s Pass in the Grand National; Moscow Flyer, Big Zeb, Finian’s Rainbow and Sprinter Sacre in the Queen Mother Champion Chase; there were a record-equalling four Champion Hurdle wins; also, lucrative links to trainers Jessie Harrington and Nicky Henderson and, latterly, the plum job replacing McCoy in the green and gold hooped silks on runners owned by JP McManus.

Of the many headline horses, the partnership with the Harrington-trained Moscow Flyer, a charismatic star of the fast and furious two mile chasing division – though he did win over further – stands out.

They combined for all but one of the horse’s twenty-six victories, forming a famously close and formidable axis, and Geraghty, reflecting on his career, sparked memories and smiles aplenty for me when saying: "Nothing was going to beat him as long as I stayed on him and he stayed on his feet."

Because, over steeplechase fences, they fell or the jockey was unseated four times, almost all high profile including when in the lead at Punchestown in 2003 and, a season later, when defending the Queen Mother Champion Chase title at Cheltenham.

That appearance by Moscow Flyer came amidst a haze of hype, and the unseating must have felt like a crushing blow, but I recall Geraghty ‘fronting up’ with a string of post-race interviews – the jockey who had been described as a “cocky little bastard” early in his career had left that behind.

And it must be extra satisfying that not only does the retirement come on his own terms – despite being plagued by injury – but it also follows a memorable five-winner Festival, when he only narrowly missed out on the top rider award, thereby silencing snipers who had been yapping about the possibility of those famous skills waning.

So, the jump jockeys' changing room now has no Geraghty as well as no McCoy and no Walsh; Richard Johnson gallops on of course alongside fellow stalwarts like Davy Russell and Robbie Power, but for how much longer – the guard is well and truly changing.