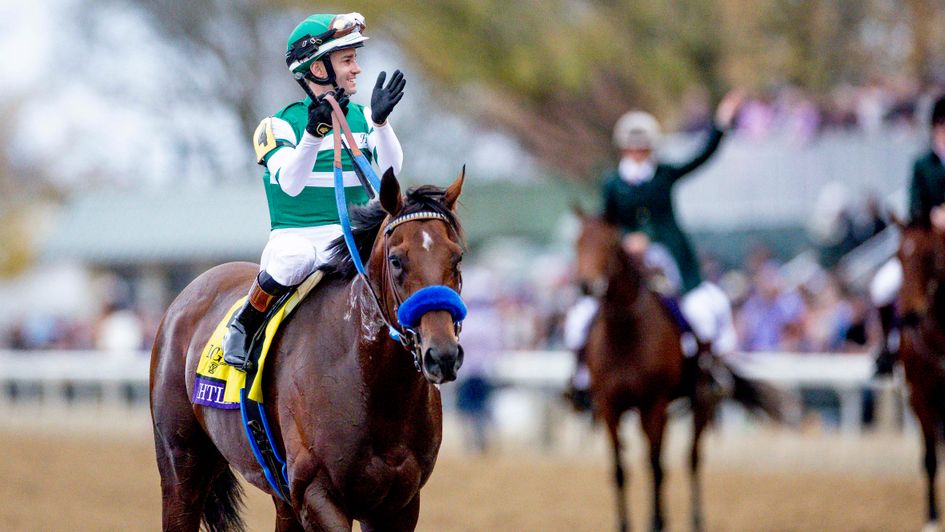 The world’s best racehorse headed to Keeneland unbeaten in five starts and having recorded the second highest Beyer speed figure since 1991 when stepping up to 10 furlongs with aplomb at Del Mar in September.

Facing the toughest cast of his career, John Sadler’s four-year-old proved he was fully deserving of his reputation as one of the best racehorses to ever grace the dirt with a commanding victory in Kentucky.

The Tapit colt was away well in the hands of Flavien Prat and hot on the tail of the front-running Life Is Good as the field ran to the first turn and the pair were at least 10 lengths clear of the chasing pack as the race developed down the far side.

Flightline’s jockey was content to stalk last year’s Dirt Mile champion and Prat was motionless as he took a lead into straight.

The rider soon nudged the accelerator and Flightline put the $6million contest to bed in a matter of strides, as he took off for a ceremonial waltz up the stretch to the wire where he was eight length and a quarter lengths clear of the runner-up Olympiad.

✈️ Flightline absolutely destroys them in the @BreedersCup Classic!#BreedersCup #BC22 pic.twitter.com/JiIkQcxBiT

Flightline’s trainer broke his Breeders’ Cup duck when Accelerate won the Classic in 2018 and he was delighted to double his tally in the meeting’s feature contest with his horse of a lifetime.

“We are all really thrilled, he’s a remarkable horse and one of the best that ever looked through a bridle,” said Sadler.

“I haven’t been sleeping for the past two weeks and this is a culmination of a lifetime’s work, but how do you describe greatness? I think you have to go back to Secretariat and Seattle Slew, but this horse is certainly one of the best we have seen in a long time.

“I feel very blessed to train him and I have tried to be a good steward because when you are good to your horse, they tend to be good to you.”

On the future he added: “We are in a partnership with Flightline and in the course of the next few says we need to get together and discuss what is best for the horse. Right now, he will go down Rice Road to his stable and have a good dinner.”

Prat said: “He has so much talent and we were expecting a great run from him. It was one of the deepest fields he has faced, but he was an old pro.

“Once I broke well and was where I wanted to be I was in control, you never know what to expect, it’s horse racing and sometimes it doesn’t happen the way you think, but I was pretty much in control all the way.”