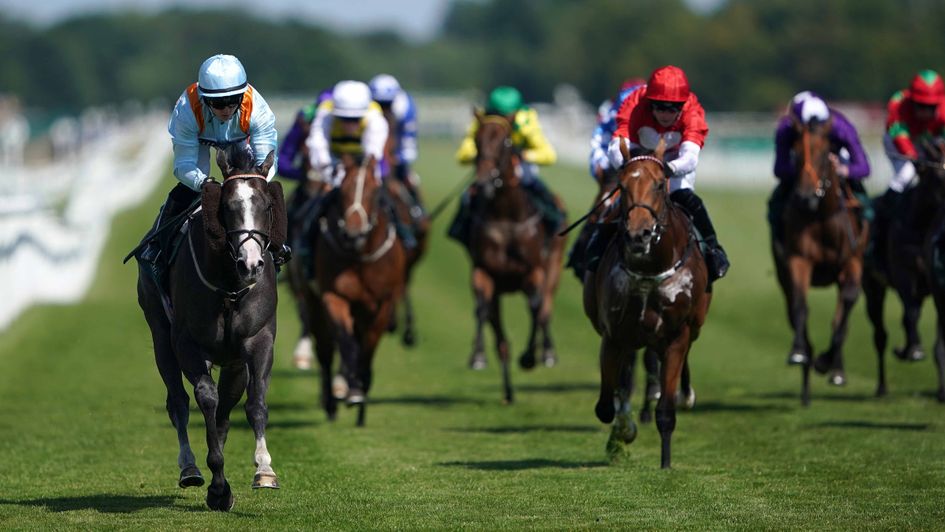 Eddie's Boy is away and clear at Newbury

Eddie's Boy set to return to France for next start

Eddie’s Boy is likely to head back to France for the Criterium de Maisons-Laffitte after his storming Group Three success at Chantilly.

The Archie Watson-trained grey was a facile winner under Hollie Doyle, triumphing by six and a half lengths and defeating nine rivals. The victory follows a third-placed run under a penalty in the Tattersalls Somerville Auction Stakes at Newmarket on what was the two-year-old’s first attempt at a six-furlong trip.

His performances at both Newmarket and ParisLongchamp have convinced connections to remain at that distance and the Group Two Criterium de Maisons-Laffitte is a likely next outing for the son of Havana Grey.

“He’s come out of his race great, that was a very emphatic performance from him on Saturday,” said Tom Palin of owners Middleham Park Racing. “He’s clearly relished going up in trip. I must admit that for the first five or six starts of his life, we thought he was all speed and then after his effort in the Molecomb (fourth), we felt it was time to have a little look.

“He was coming off the bridle a little bit soon, so we thought we’d try six with him and he’s been a bit of a revelation since then. He carried a big weight in the sales race at Newmarket and he saw the trip out really well then, so it gave us a bit of confidence to try to find another six-furlong pattern race. He’s done that in very emphatic fashion and probably caught us off guard a little bit there by the manner in which he did it.

“I don’t think there was much fluke about it, you might take it with a bit of a pinch of salt but you can’t make six and a half lengths up! It gives us a little bit of confidence now to maybe pitch him in a bit, there’s a Group Two over the same distance, the Criterium de Maisons-Laffitte, that’s at the start of October. I imagine he’d be near the head of the market if he goes there and takes his chance.”