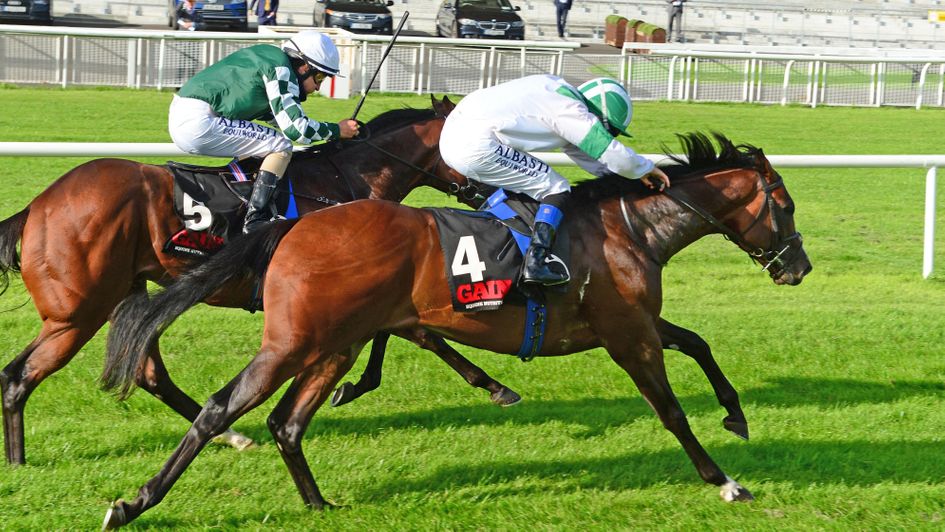 Laws Of Indices (near side)

Ken Condon may send his Prix Jean Prat hero Law Of Indices back to Deauville for next month’s Prix Maurice de Gheest.

Fifth in the six-furlong Commonwealth Cup at Royal Ascot, the three-year-old successfully moved back up to seven to claim Group One glory in France last weekend under an excellent front-running ride from Olivier Peslier.

Condon immediately nominated October’s Prix de la Foret at ParisLongchamp as a likely end-of-season target, but Laws Of Indices could head back across the Channel before then for another top-level assignment.

“He’s come back very well – he was back on Tuesday and cantered Wednesday,” said Condon.

“He’s having a quiet week after the travelling and everything, but he’s in good shape. I think there’s a very good chance that he’ll run in the Prix Maurice de Gheest on August 8.

“It’s a month between the races. Straight after the Prix Jean Prat I had it in my head it was only three weeks, but that extra week could swing things.

“It’s the travel that takes more out of them than the racing, and that extra week could be crucial when we make up our minds.

“He’s back in his routine, and the initial verdict is good, so I suspect it will be the Maurice de Gheest next. After that, we could then wait until the Prix de la Foret – I think that’s probably what will happen.”

Condon will be encouraged if there is some give in the ground at Deauville.

“It was yielding or good to soft ground the last day, and you’d be hoping for something similar,” he said.

“I guess coming back in trip (to six and a half furlongs) you wouldn’t want it very quick, which it could be at Deauville in August. We’ll play that by ear and see where we are closer to the time.

“We were delighted with him on Sunday. He ran a huge race under an excellent ride, and everything fell into place.”