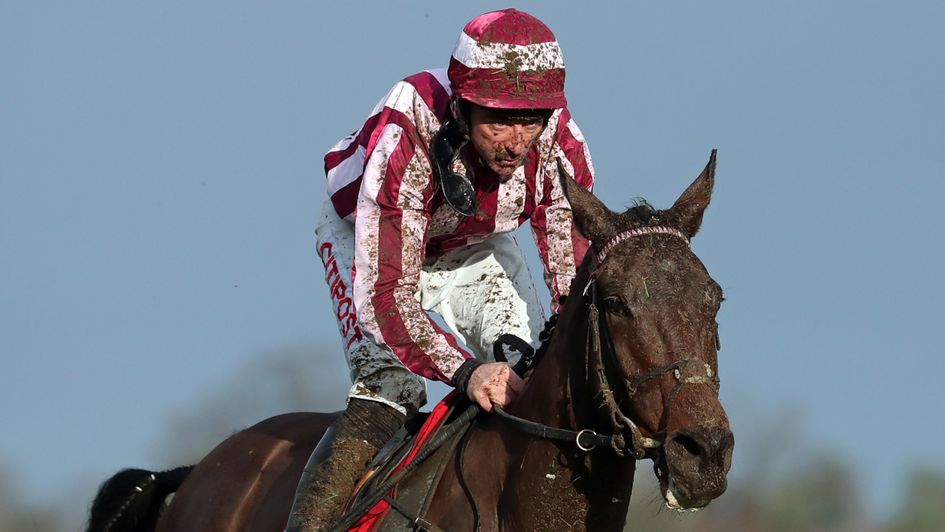 Davy Russell is set to return to race riding at Downpatrick next week after almost a year out of the saddle because of a serious neck injury.

The dual Grand National-winning jockey has been on the sidelines since his fall from Doctor Duffy at Limerick last October.

Russell initially set himself a new-year target to ride again. But that first deadline passed, and his hopes of being back in time for the Cheltenham Festival in March also proved in vain.

The three-time Irish champion, and 2014 Cheltenham Gold Cup winner, will be back instead next Friday.

He wrote in his blog for bookmakers Star Sports: “After fast approaching 11 months, I’m delighted to tell you that I’m pencilled in for a return to race-riding next Friday September 17 at Downpatrick – and then again at Navan the next day.”

His return comes in the same week as that of trainer Gordon Elliott, who is free to race horses again after serving his six-month suspension.

Russell said: “I’ve talked things through with Gordon, and I can virtually tell you the horses (I will be riding at Downpatrick) – but I won’t at this stage.

“I guess the key is for a bit of rain to fall and then we are all systems go.

“It’s exciting … I’m going to take things steady, and there is no set plan on how many I will ride each day or each week.

“If Gordon wants me to ride one, I’ll ride it all right – if he offers me five or six, that’s no bother either.

“The key is simply being ready to go, and that’s where I am at now. I promised myself I’d give it as long as it takes, because I didn’t want to come back and not be at my best.

“I pushed really hard to get back for Cheltenham back in March, but it was just too soon.”

Russell has enjoyed family time – and an unscheduled break in the regime of watching his weight and maintaining race-riding fitness – but is confident he is ready to resume his career.

The 42-year-old added: “It was last October I took that crashing fall from Doctor Duffy in Limerick – and it’s been a long road back.

“When you get to my age you have to be 100 per cent ready to return, and that’s why I’ve sat on the sidelines for so long.

“As for my fitness levels, I’m not a great runner after taking so many knocks over the years, so have been concentrating on riding out here at home and in Gordon’s (yard in County Meath).

“I’ve worked really hard at that over the last few months, and feel great.”

He said: “It’s a bit early for some of the classier horses to be back in training in Gordon’s, but it was great to see Tiger Roll back in and in terrific form.

“He’s such a legend of a horse, and it’s horses like him that make you stop eating ice cream!”