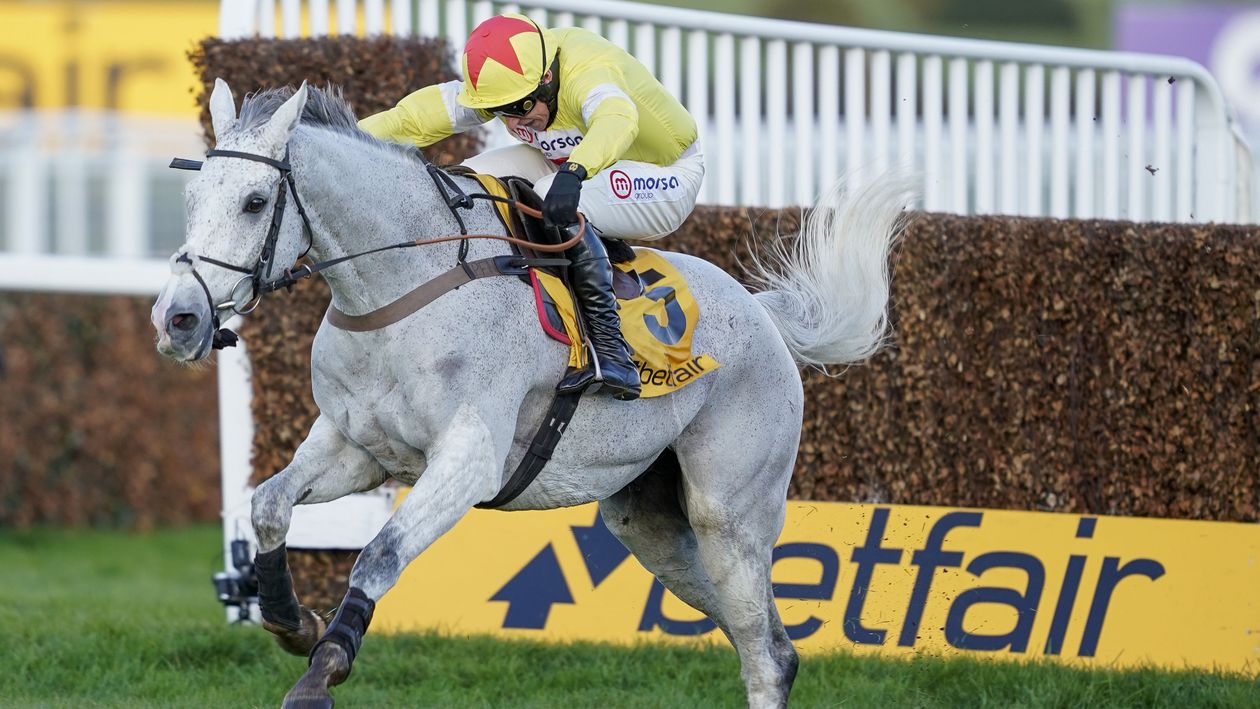 Politologue heads for home in the Betfair Tingle Creek Chase

Sandown comment and analysis from David Ord after Politologue's win

There were rumblings in the air and a tense stand-off at Sandown but David Ord believes now is the time to give Politologue some love.

It’s time to give Politologue some love.

My, does he deserve it. The grey was primed and ready for his reappearance and bar for a fleeting stride or two passing the dolled-off Pond Fence, looked in control of this Grade One contest throughout.

A bold-jumping grey, he’s the sort to really capture the public’s imagination in a division that’s traditionally dominated by giants.

Altior cast a huge shadow over it for three years, as he did Saturday’s race, his withdrawal on Friday evening sparking more pre-race discussion than Politologue’s performance did afterwards.

That’s a shame – as was the absence of Nicky Henderson’s star.

Was the ground at the Esher track really that testing? It didn’t bear comparison to the gluepot at Ascot last year for the epic clash with Cyrname that cost him his unbeaten record over fences and, connections felt, his spark for the rest of the campaign.

And how many more shots will they get at a Grade One prize with a horse who’s now rising 11? This might well have been his best chance of adding another to his magnificent CV before the Irish juggernauts send their big guns over for the spring showpieces.

Henderson copped flak for the decision – which surely must have been a team one involving Nico De Boinville, who rode at Sandown on Friday, and his owners. Now he’ll have to plot a route to Cheltenham and prove that it was the right one.

The Desert Orchid and Game Spirit appeal as the likely stepping stones – and potential penalty kicks.

Obviously they must do what they feel is right for the horse but Politologue will be waiting in the wings when he’s ready to go back into the top grade and he’s clearly in no mood to hand back the crown without a fight.

He’s a horse who epitomises his trainer; Paul Nicholls loves a battle and his ability to keep horses chipping away towards their peak rating is remarkable.

The longevity of their careers is testament to the groundwork that goes in at Ditcheat and this was the handler’s 11th win in the Betfair Tingle Creek Chase.

There’s no fear of failure, defeats are part and parcel of the game. Politologue has had his fair share over the years but the ability to take them on the chin and bounce back to strike again on the big stage is what stirs the emotions.

"He is a little bit like Kauto (Star) was in his last year in that he was probably as good as ever. He is probably as good as he has ever been. We've changed his routine, I think when he ran in the Champion Chase that's the best we've ever had him and today that we'd have improved on that. We've got the key to him now." the trainer beamed.

🏆🏆 In his absence, Politologue won his second Tingle Creek pic.twitter.com/vjq9aP6rat

Harry Skelton, who partnered Politologue, was beaming himself after completing a Grade One double initiated by Allmankind’s win in the Planteur At Chapel Stud Henry VIII Novices' Chase.

Here’s a one-time Derby hope for Michael Bell, reinvented as a freewheeling chaser and such was his dominance on Saturday, single-figure quotes for the Sporting Life Arkle in March came as no surprise.

The hooded trailblazer is one-dimensional and while he couldn’t maintain the gallop in the JCB Triumph Hurdle of 2020, his slick fencing will always make him a difficult hare for the hounds to catch. He takes rivals out of their comfort zone.

Henderson’s Gold Cup runner-up Santini made a satisfactory reappearance when chasing home Lake View Lad in a war of attrition for the William Hill Many Clouds Chase at Aintree.

The winner sported the Trevor Hemmings colours carried by the wonderful chaser after whom the contest is named and earned quotes for the Randox Health Grand National afterwards.

I hope he grabbed a quick word of advice from Vieux Lion Rouge in the racecourse stables. He stretched his blemish-free record over the formidable fences to 223 jumps and no faults as he careered to a second triumph in the William Hill Becher Chase.

Nobody does it better.

So as the darkness fell and temperatures plunged we were left to reflect on a Saturday deprived of its headline act but one that still delivered in spades.

Speed at Sandown, stamina at Aintree and another Grade One prize heading back to Somerset. It wasn’t a day to raise a glass to absent friends, it was one to toast those who came to the party and stamped their own mark on one of the great races of the jumps season.