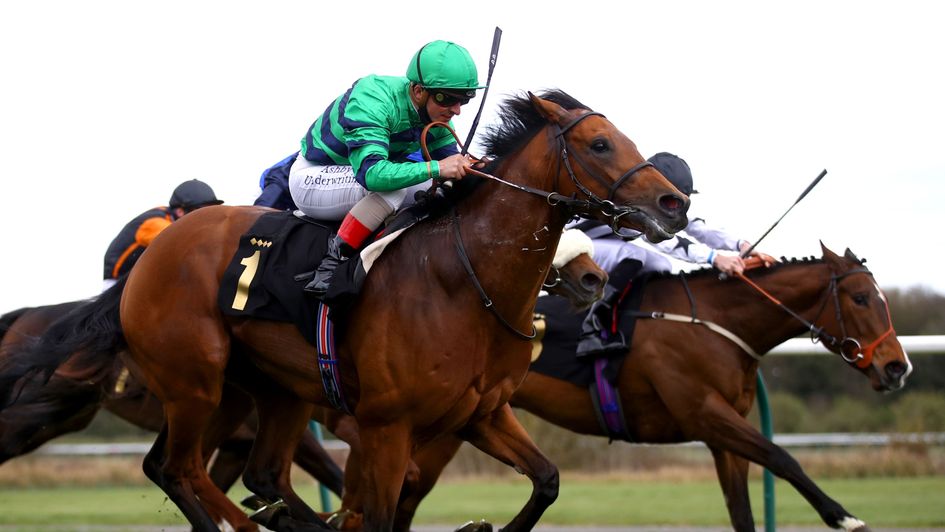 Marco Botti believes Atalis Bay has “plenty in his favour” ahead of bidding to secure the most notable success of his career in the Coral “Beaten By A Length” Free Bet Scurry Stakes at Sandown Park.

The Cable Bay colt will attempt to claim a first victory at Listed level in the five furlong dash, having found only talented filly Winter Power too strong in the same grade at York last time out. He heads the market at 6/4 with the sponsors.

Although tasting defeat on his most recent appearance, Atalis Bay showed he had trained on from two years old to three when giving weight away all round to make a winning return in a conditions contest at Nottingham in April.

Botti said: “Atalis Bay is in great form and this is the race we have waited for since he was second up at York, as it seems a good spot. He is drawn in the middle in four and he should have his conditions as he wants fast ground. He has plenty in his favour and we are looking forward to it.

“He has done well this year, winning a conditions race at Nottingham before finishing second in a Listed race at York behind what looked a really smart filly. He is a stronger horse than last year and though is not the biggest he has definitely thickened out. He won over six (furlongs) last year but five seems to be his trip as he seems to have got faster.

“We had the option of going to Royal Ascot but he would have been high enough in the handicap against a full field. He is rated 103 so he is not far off Group class. He is lightly raced and unexposed, so hopefully there is more to come.”

Mick Appleby is optimistic that last time out Goodwood scorer Warrior Brave can handle a step up in class in what could be his final start for his current connections ahead of a potential trip to the sales.

Appleby said: “He is possibly going to go in the London Sale (staged online by Goffs on Monday June 14) after this if he runs well, and if he doesn’t he probably won’t and we might save him for the Wokingham, but the owners (The Horse Watchers) have lots of options.

“He did it well at Goodwood and he is progressing well but this is his toughest race. He has run at five (furlongs) the last two times but I think six is more his ideal trip. I would rather be drawn more out than in (Warrior Brave is drawn in stall six). I don’t like being drawn one or two at Sandown as if you miss it you have no chance. Being drawn on the inside there you have to go forward."

Steel Bull is one of two Irish-trained runners in the race and his trainer Michael O’Callaghan believes being drawn widest of them all in stall nine will work in favour of the Clodovil colt, who is chasing a first victory since landing last year’s Group Three Molecomb Stakes over the same distance at Glorious Goodwood last year.

O’Callaghan said: “He needed his first run of the season. It was his first start against older horses and the ground wasn’t ideal, but he has come out of the race well. Back over a fast five furlongs in England will suit him. He has a lot of natural speed and the way he has to be ridden and held up the draw might actually suit him.

“It is tough for three year old sprinters. We will just feel our way through this year as I think he will develop into a really good sprinter."

Tom Ward expects Mishal Star, who has finished fourth at Listed level on her last three outings, to benefit from the switch to a sounder surface on her first start over the trip.

Ward said: “It looks the right race on paper. Though she is dropping back to five furlongs for the first time she has got plenty of pace and I think the race will pan out well for her.

“She has got a nice draw (stall two) and it is the first time she has got her ground. She has been running on soft ground and her wheels just spin on that. On better ground at home she works nicely. It will take a bit of winning but if she could it would be fantastic.”

Clive Cox hopes the application of a set of blinkers and a tongue tie can have the desired impact on First Edition, who is seeking to secure his first victory since his wide margin course and distance success last September. The Invincible Spirit colt was third to the re-opposing Nelson Gay (Richard Hughes) under top-weight over tomorrow’s course and distance in a handicap on April 23.

Cox said: “He was a very impressive course and distance winner last year. The ground was slightly easier than ideal on his comeback. We have just put the blinkers and tongue tie on to help him but he has definitely come forward for his last run.