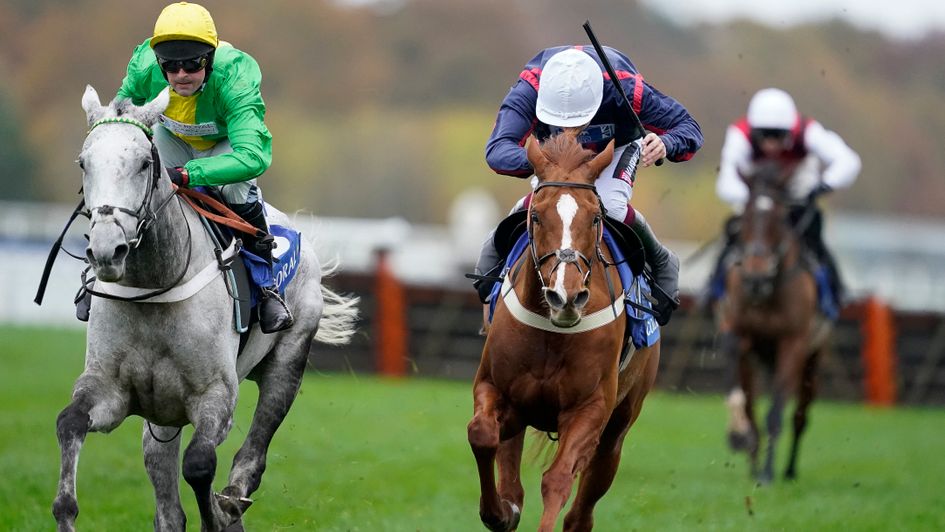 Buzz (left) surges past Song For Someone

Buzz ran out an impressive winner of the Grade 2 Coral Hurdle for Nicky Henderson and Nico de Boinville at Ascot.

The Cesarewitch winner was second in a Grade 1 at Aintree in the spring and he cruised through this contest as he eased into contention behind the front-running Song For Someone.

Last year's winner gave it a good go from the front end, but Buzz was tanking along in second heading to the last and he sailed into the lead without fuss.

A three-and-a-quarter winner at the line, the sponsors went 8/1 from 12s for the Paddy Power Stayers' Hurdle at Cheltenham in March.

Henderson said: “His jumping was amazing, that was Champion Hurdle-standard jumping.He was so quick from the get go, we always knew there was going to be a pretty strong gallop – Goshen didn’t do quite what we expected him to do, but even so they went a good gallop. He never missed a jump.

“I think we’ve got to try going up (in trip). Nobody knows if he’ll stay, all we know is he loves soft ground so we’re not going to be worried about that. He’s perfectly happy on this, which is probably the same as what Newmarket was.”

Betfair cut Buzz to 8/1 for the Paddy Stayers’ Hurdle, and the Seven Barrows trainer added: “The idea was always to try him at three, you can always come back. I think if you never ask the question…we’ll see what Nico says, he might say ‘that’s madness!’, but I can’t see him coming back and being a two-mile Champion Hurdler.”

There was extra joy for connections, as Buzz runs in the colours of the Thurloe For Royal Marsden Cancer Charity, with 25 per cent of the share of the horse’s prize-money for the owners donated to the charity.

James Stafford of Thurloe Thoroughbreds said: “On Tuesday we will hand over a cheque for £54,000, hopefully racing has done some good for the cancer charity.”