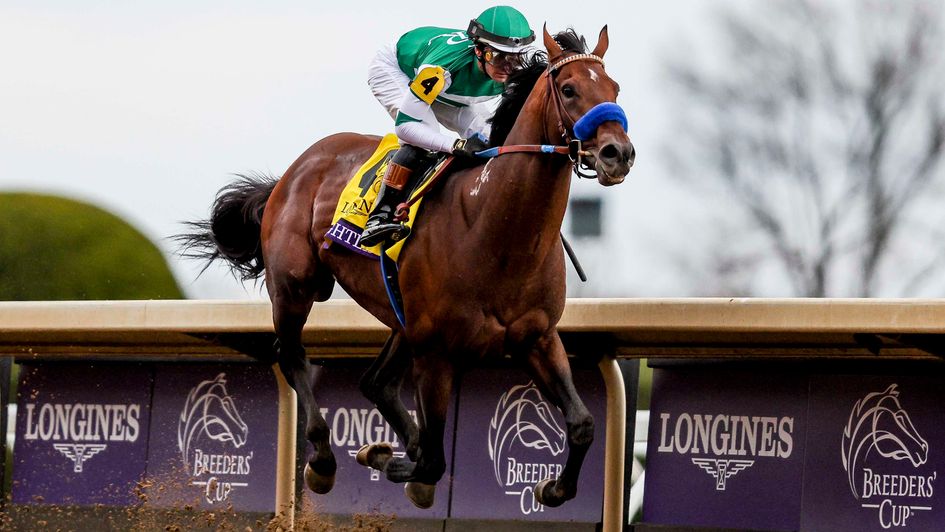 Flightline stretches clear in the Classic (courtesy of Breeders' Cup)

Ben Linfoot was at Keeneland to witness Flightline's coronation in the Breeders' Cup Classic, while the European team fly home with six winners.

In the end, it wasn’t quite Secretariat. But that’s no slight. It was close. The best in fifty years. Flightline. A new American racing legend in his own right who blew away his Breeders’ Cup Classic rivals with consummate ease on a wild and windy day in Kentucky.

There was to be no track record, but eight-and-a-quarter lengths is the biggest winning distance in the history of the Breeders’ Cup Classic and that allowed a rowdy guard of honour from an ecstatic paying public as their hero powered home. Trainer John Sadler, watching from the stands, threw his racecard in the air. Flavien Prat, barely a speck of dust on his green and white silks, punched his fist towards the darkening grey skies, the jockey illuminated by the big screens on the stretch.

Racing has a habit of throwing up upsets when you least expect them. Just look at Baaeed. $6million horse races are not handed to any horse on a plate and Life Is Good ensured Flightline was in a race, at least until they turned into the straight. Life Is Good ran well, above expectations, but this result was never in any moment’s doubt, and Todd Pletcher’s horse was defeated by over 12 lengths in fifth despite running like his life depended on it.

Flightline cruised on his shoulder. The leading duo were in a race of their own with the chasing pack several lengths behind. Bill Mott’s Olympiad emerged best of the rest to get within nine lengths of the winner at the line, but even that losing distance flatters him to a degree.

“Brilliant is his normal,” said Sadler afterwards, wiping away the tears. “He didn’t disappoint and he never has.”

Sadler wasn’t the only one crying. Flightline fever gripped the track. The surrounding area of the paddock was packed out an hour before the Classic and this was like Frankel at York with purple caps on.

The wind swirled around the track all day. Orange and red leaves were blown around the paddock trees like autumn confetti. There were no nuptials to celebrate, but there was so much love for Flightline. The breeze ensured a constant whiff of cigar. Flightline could’ve lit one of those up with a quarter of a mile to go.

✈️ Flightline absolutely destroys them in the @BreedersCup Classic!#BreedersCup #BC22 pic.twitter.com/JiIkQcxBiT

Lexington was a fitting venue for this spectacular triumph. The son of Tapit was foaled in Kentucky and was sold as a yearling here at Keeneland, home of the largest thoroughbred auction house in the world. He’s come full circle. His racing future is still to be decided, but if this is the end it was the perfect place to do it.

Away from the Classic the Ballydoyle vs Godolphin battle that began on Friday rumbled on during what proved to be a fantastic meeting for the Europeans, who fly home with six winners. Aidan O’Brien finished the meeting with three, thanks to a course-record run from Tuesday and (another) great ride from Ryan Moore in the Filly & Mare Turf.

“We always thought her trip would be a mile and a quarter, even though she won the Oaks over a mile and a half,” O’Brien said. On upcoming plans for the filly he added: “Beforehand we said she could go to Ashford, depending on what happened in the race, but there’s a good chance she stays in training next year.”

That’s good news and there was more joy for Godolphin and the unstoppable Charlie Appleby, too, who also leaves Keeneland with three trophies. Modern Games, another who stays in training next year, was foot perfect in the Mile, while Rebel’s Romance ran away with the Turf under James Doyle, taking Appleby’s Breeders’ Cup record to a sensational nine from 18. Godolphin had a treble on the card thanks to Bill Mott’s Cody’s Wish in the Dirt Mile. 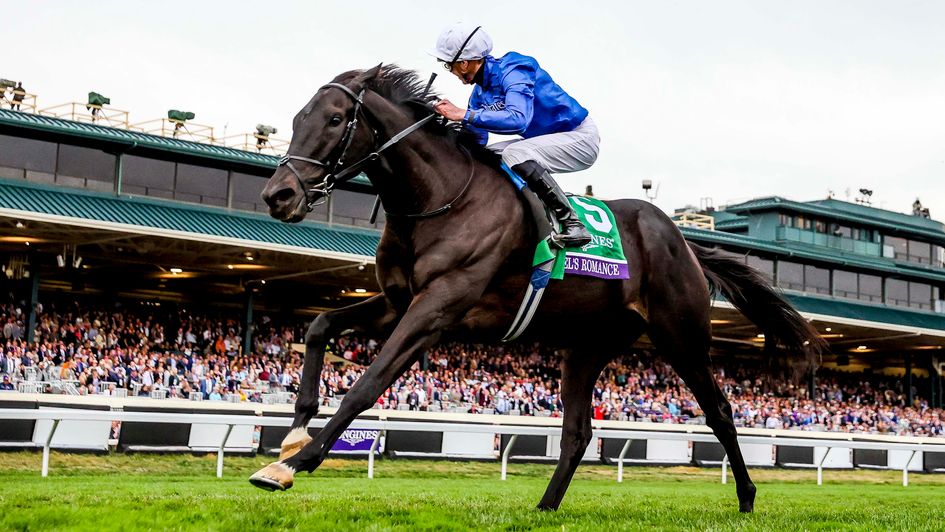 Earlier on there was heartbreak for the European team in the Breeders’ Cup Turf Sprint, when Brad Cox’s 50/1 longshot Caravel held off the late charge of three British-trained runners.

The strong paddock breeze seemed to tighten the screw on the atmosphere beforehand and some got worked up. Flotus was the most flighty, lit up in the pre-parade with the red hood not working any miracles. She misbehaved in the race, too, impeding Creative Force.

In contrast Golden Pal behaved like a lamb, as if he was posing for a portrait, but this laidback attitude cost him in the race when he was slow out of the stalls, his chance seriously compromised as soon as the gates opened.

That probably didn’t help Highfield Princess, who wanted a bullet to aim at, and her run was checked on the turn, as well. She ran on well for fourth, as did Creative Force for third, but leading the British charge in second was Emaraaty Ana, ridden by Moore.

With trainer Kevin Ryan on holiday in Tenerife, it was left to an elated son and assistant, Adam, to sum up the emotions of running one hell of a horse race, only to be beaten by an inspired home runner.

“For a split second I thought we had it,” he said. “When he got the split there on the inside, for a horse that stays six furlongs, I thought we might edge it, but the filly was very game.”

From four goes at the Breeders’ Cup the Ryan yard have now had a winner and three places, with Emaraaty Ana adding to his fourth last year on the back of East finishing second in 2018 and Glass Slippers winning the Turf Sprint two years ago.

“Not bad for a small yard from Yorkshire,” Ryan laughed, before trying to find somewhere less windy to call his dad on the phone.

As if by magic, the wind subsided as Flightline entered the paddock before the Classic. It was still as he circled a huge throng of people getting a view of this huge physical specimen up close. Aidan O’Brien, with no runner in the race, was in there having a good look. His son Joseph had his eyes fixed on the star of the show, too.

He didn’t disappoint. It was everything we hoped for. And as a burnt orange sunset closes the 39th Breeders’ Cup, there’s only one conversation on everyone’s lips; the unbeaten Flightline, now six from six, the horse who simply blew away every rival he ever met. 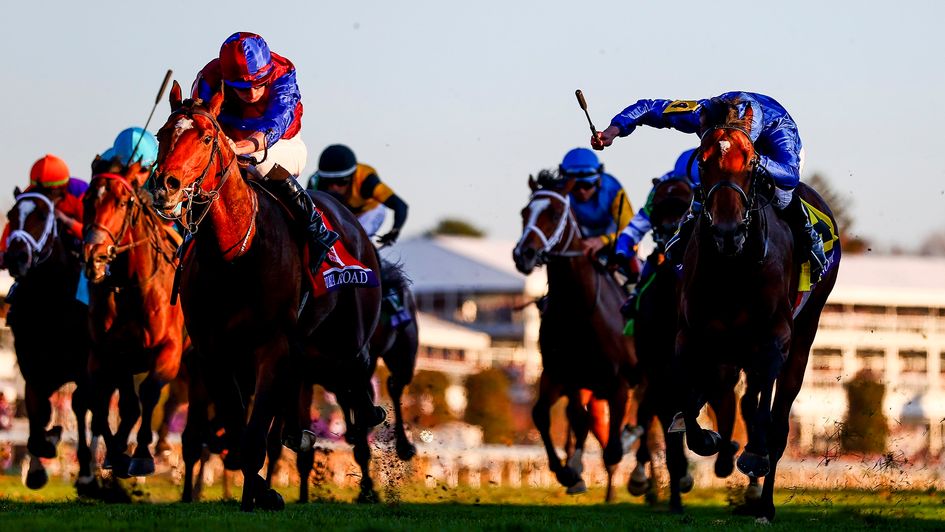