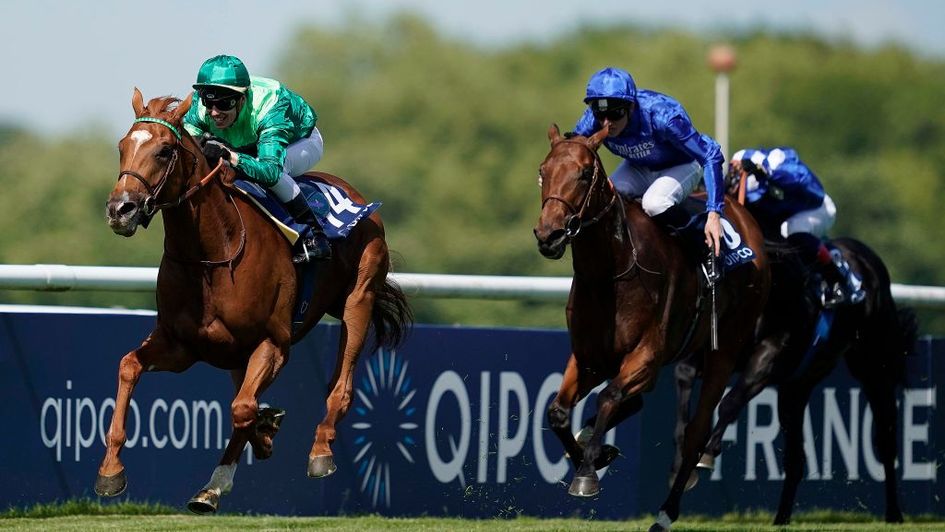 Sottsass pulls away from Persian King at Chantilly

Longchamp review: Sottsass could finish only fourth as Shaman made every yard of the running to lift the Prix d'Harcourt at ParisLongchamp.

All eyes were on the Jean-Claude Rouget-trained Sottsass after a 2019 campaign that saw him win the French Derby and finish third to Waldgeist and Enable in the Prix de l'Arc de Triomphe.

However, he never looked like troubling 6/1 winner Shaman, who benefited from a fine front-running ride by Maxime Guyon who himself enjoyed a fruitful day in Paris.

The Carlos Laffon-Parias-trained winner was no slouch himself last term, beating Sottsass in the Prix La Force before finishing second in the French 2000 Guineas and also the Prix Jacques le Marois.

Trying 10 furlongs for the first time, he bounced back to his best in this Group Two event, kicking on in the straight to repel the late challenge of Way To Paris, with Simona only narrowly beaten in third.

😲 This time it's Sottsass who disappoints as Shaman claims Group Two honours at Longchamp...pic.twitter.com/yDsSbsfv1C

Victor Ludorum (8/15 fav) was last seen when winning the Group One Prix Jean-Luc Lagardere last October and was expected to cement his Classic claims in this trial for the French 2000 Guineas over a mile.

However, Andre Fabre's runner raced keenly in the early stages as Mickael Barzalona struggled to find any cover, with The Summit setting the gallop from the off.

The leader was still travelling well within himself as the field turned for home, with Arc-winning jockey Pierre-Charles Boudot seemingly having a bit still up his sleeve as he pushed his mount on with about two furlongs to run.

Victor Ludorum could not go with him and only Ecrivain - who did not enjoy the clearest of passages in the straight - looked a danger, eventually having to settle for a fast-finishing second.

The favourite was only third and was immediately pushed out to 9/2 from 15/8 for the French Guineas by Sky Bet. The same firm make The Summit an 7-1 chance for trainer Henri-Alex Pantall. Betfair and Paddy Power make him an 8/1 chance and pushed Victor Ludorum out to 7/2 from 7/4.

🏇 Victor Ludorum loses his unbeaten record at Longchamp as 28/1 shot The Summit pulls off a surprise victory...pic.twitter.com/0mwKJDEqmX

She told www.godolphin.com: "Victor Ludorum looked to be very ring-rusty but both Andre and Mickael were happy enough with his performance.

"Provided he comes out of the race well, he will head to the Poule d'Essai des Poulains (June 1) en route to hopefully contesting the Prix du Jockey Club."

Having been third to Millisle and Raffle Prize in the Cheveley Park Stakes last season, the Fabre-trained filly brought the strongest form credentials to the Group Three contest, but had been expected to face a test from Khayzaraan.

The Freddy Head-trained runner jumped out in front and appeared to be travelling smoothly - only to empty alarmingly two furlongs from home and ultimately finish heavily eased at the rear of the field.

Up front, Tropbeau answered every question for Mickael Barzalona when hitting the front, narrowly accounting for Dream And Do and Tickle Me Green.

Racing resumed in France as Batwan ran out a good winner of the opening Prix de Saint-Georges for trainer Philippe Sogorb.

The five-year-old hadn't been sighted since finishing second in this very race 12 months ago but having found himself a prominent pitch in the early exchanges, he picked up well to lead inside the final furlong before holding off a late charge from veteran Gold Vibe.

Big things were expected of the lightly-raced Duhail beforehand but he was always on the back foot after a slow start and though he worked his way into contention on the rail, his effort quickly petered out as the action developed down the centre of the track.

Last year's winner Sestilio Jet ran another fine race back in third but he was no match for old foe Batwan who was comfortably on top at the line, returning the 9/1 victor with the winning distances half a length and a Neck.

🇫🇷 Racing resumes in France and Batwan lands the opener in good style at Longchamp.pic.twitter.com/kF0mmPfrK2

Christophe Soumillon produced a brilliant ride to steer Shinning Ocean to victory in the Prix d'Escoville.

The 16/1 shot was given little chance beforehand as the market was dominated by Twist and Chorba but Shinning Ocean ran out a commanding winner after taking control of the contest as soon as the stalls opened.

Sent immediately into the lead by Soumillon, Shinning Ocean had his rivals on the stretch with two furlongs to run and he skipped clear in ready fashion as in behind, Chorba suffered considerable interference before eventually plugging on for fourth.

Twist saw too much daylight as he pulled hard on the outside and could only finish third while Speak Of The Devil filled the runner-up spot, some two and a half lengths behind the eased-down winner.

My Charming Prince (15/2) produced a fine turn of foot to come from last to first to land the Prix des Nenuphars.

The winner still had a wall of horses in front of him as the race began in earnest in the home straight, but jockey Vincent Cheminaud always cut a confident figure and he picked his way through his rivals before mastering Jenufa deep inside the final furlong.

Miss Extra produced a similarly impressive change of gear to swoop late in the Prix de Fleurus and hand Guyon another winner on the card.

The 8-1 scorer had to wait for her run but burst into the lead once afforded some daylight on the rail and was comfortably on top of Tarida at the line.