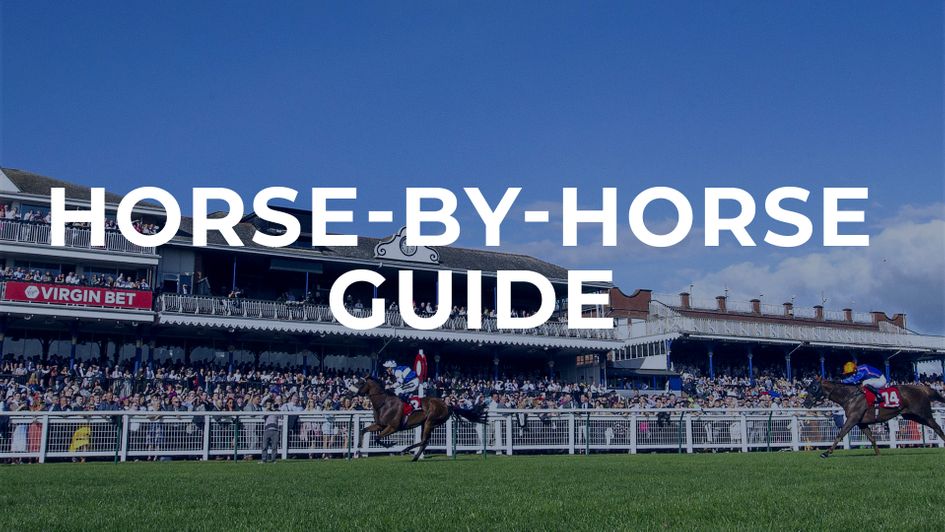 We look ahead to Saturday's feature handicap - the Virgin Bet Ayr Gold Cup - with a full guide to the field and verdict.

One of three horses in the field officially well-in here, having backed up his Stewards' Cup win with a fine run when second to Summerghand at York. Only managed seventh in this last year but had beaten Bielsa over course and distance earlier in 2021 and he's clearly better than ever so must be taken seriously.

Getting on a bit now and he's 2lb wrong having run down the field at Goodwood since the weights were published. Sustained a small injury that day so possibly best excused but he's probably not the force of old and looks vulnerable again given all his best form is over seven furlongs anyway.

Comes here officially the best-handicapped horse in the race as he's 4lb ahead of the assessor due to recent placed form at York, Goodwood and Sandown (third of five the last twice, admittedly). However, all six career wins have come over seven furlongs or a mile and his stamina might not come into play enough given the conditions this weekend.

Four-year-old filly with a real touch of class but connections clearly struggling to eke out the best from her given blinkers experiment at Deauville and cheekpieces last time. They're unsurprisingly sticking with the latter after her improved, head-second at Newmarket and a belated handicap debut in a huge field like this may be just what's required.

Had another good year already and a little unfortunate to have only won once in 2022 so far. Has gone up the weights, though, and fair chance the handicapper just about has him where he wants him at the moment.

Tough, battle-hardened, six-furlong specialist who was probably better than ever when a close third at the Curragh last Sunday. Runs off a 5lb higher mark than when third in this event 12 months ago but strong each-way claims once again.

The old man of the party at the age of nine but remains a terrific servant for connections and was back in the winners' circle when landing a warm six-runner handicap at Newbury last month. Not disgraced when beaten just over three lengths at Ascot since then but he'll need a lot of luck to land on a race quite this strong at this stage of his career.

Another grizzled veteran of these big-field handicaps and he's a winner of 14 races from 70 career starts all told. He's 1lb well-in under the 5lb extra for scoring at York two starts ago and he's been in the thick of it in this race in the past too.

Beat Diligent Harry to win Listed Cammidge Trophy at Doncaster on his first turf run of the year but the wheels have come off since and he's been lightly raced too which suggests not all has been right. Eased a little in the weights but hard to fancy with any degree of confidence having finished mid-pack in this race last year.

Generally gives his all in these valuable handicaps but his consistency has meant he doesn't get much help from the handicapper. Gone eight runs now without a win yet he remains 5lb higher in the weights so others look more likely for top spot in this particular hit parade.

Interesting to note this year's Wokingham at Royal Ascot and Stewards' Cup at Glorious Goodwood have been won again by the 2021 victors, namely Rohaan and Commanche Falls. Bielsa looks to complete a remarkable six-furlong handicap hat-trick in that respect, and he's slipped to a dangerous-looking mark too - just 1lb higher than when beating Great Ambassador by two and a quarter lengths last September. Recent runs in Group Three and Listed company far from discouraging and he's got another (relatively) high draw again in 17.

Eyecatching sixth (denied a clear run, beaten less than two lengths) in valuable handicap at the Curragh last weekend but does have to run off a 3lb higher mark here and he's been frustrating to follow since his last career success in October 2020. More than capable of landing on a race of this nature still, but probably more one for place-only interest.

Thriving four-year-old representing a yard that has does especially well in this race in recent years. Missed Doncaster last week after some heavy rain but conditions could be looking good for him here and he's a big player despite technically being 1lb wrong at the weights under a 5lb penalty for his latest success at York's Ebor Festival.

If there's an obvious three-year-old in the field who could be plying his trade in Group races next season then it is this gelded son of Kodiac. He's progressed significantly since being gelded and was value for more than the bare margin when winning a six-runner handicap at Haydock at the start of the month. Handicapper settled on a 5lb rise so it's not like he's officially well-in under the mandatory (5lb) penalty but he has serious scope for further improvement after just six career starts and promises to be well-suited by the strong gallop and stiff finish here.

Interesting one at a big price as he arguably ran better than the finishing position when ninth to stablemate Bergerac at York last month (didn't get away well from the stalls). That was his first run since June - and being gelded - so natural improvement should be forthcoming and although still running off a mark of 99 (dropped to 97 since the weights were published) he was rated 106 coming into the year so could still be the right side of the assessor.

Always held in quite high regard by trainer Andrew Balding and, having been set some stiff tasks last term including first time out in the Commonwealth Cup, he wasn't disgraced when ninth in this race behind owner-mate Bielsa. Effectively competing off 3lb lower this time around under the 5lb penalty for winning at Goodwood recently and he could run a huge race, especially if more rain arrives.

Decent two-year-old last term, winning at Listed level on her final 2021 start. Had eight goes without adding to her tally this term and although the drop from Listed/Group level should help out, she's not obviously well handicapped in the grand scheme of things.

Likeable performer who often travels sweetly but has generally flattered to deceive since winning the Silver Wokingham at Royal Ascot in 2020. Finally back down to precisely the same mark (95) now but others look more reliable when it comes to putting their head down and getting the job done.

Won five races for Charlie Hills and, having changed hands for 58,000 guineas, he's seemingly coming back to the boil for new connections after an encouraging run when fifth in the Portland at Doncaster last weekend. Has to run off 2lb higher here but certainly not handicapped out of things on the pick of his form in the Shadwell silks and drying ground would most likely be more in his favour than not.

Had been a solid campaigner for Amanda Perrett and Michael Dods has rekindled the flame this season, the horse winning at Thirsk and Ripon earlier this year. He ran a belter when fifth in the Stewards' Cup and although a shade below that level of form when well held by Summerghand at York last time, this track should play more to his strengths. Slowly away and lost a shoe when eighth in last year's Silver Cup and capable of bettering that on Saturday.

Another progressive three-year-old worth keeping in mind. Best form so far has come on the all-weather or at York so the stiff six here could pose more of a challenge, especially given he likes to be on or close to the pace. Middle draw adds further complexity to that pace dynamic but he's obviously taken really well to the cheekpiece and it's unlikely he'd peaked at this stage.

Running well in defeat since joining Richard Fahey at the start of the year, never better than when second to Lethal Levi in big three-year-old sprint handicap at Newmarket in July. Fraction frustrating since and softer ground would have been preferred in an ideal world but every chance he's sitting on a good mark and will pop up at some stage soon.

Useful on his day a couple of years ago but has lost his way since last win back in May 2021 and although the return of cheekpieces could spark him back to life, there's not enough in his 2022 form to suggest he can emerge on top ahead of this bunch of thriving rivals.

Picked up by shrewd connections from Ed Dunlop's yard and duly won first three starts this summer. Slow start put him on the back foot at Doncaster last week but the soft ground also appeared to blunt his typically strong finishing kick so he's well worth another chance running off the same mark here.

Sneaks in as the final three-year-old to make the cut and anything this yard has aimed at this meeting is well worth respecting. Won a couple of times at two and added to the tally with a narrow win over Dakota Gold at Ripon last month. Beaten a length by Lucky Man at York since, staying on nicely at the finish, and a return to this stiff track looks a plus as he was fourth in a 15-runner nursery at this meeting 12 months ago.

Loads to consider as ever but it's hard to avoid the obvious potential possessed by those representing the three-year-old generation.

Khanjar stands out given his connections and the way he won last time but he's been well found in the betting and preference is for ALEEZDANCER breaking from stall one. He caught the eye running on for third behind Lucky Man at York and looks to have been primed for this weekend by a trainer who does extremely well at Ayr.

His stablemates Bergerac, Bielsa and Gis A Sub all make some sort of appeal too, while it's too soon to be giving up on Mick Appleby's Juan Les Pins after he got a bit stuck in the mud at Doncaster last week.