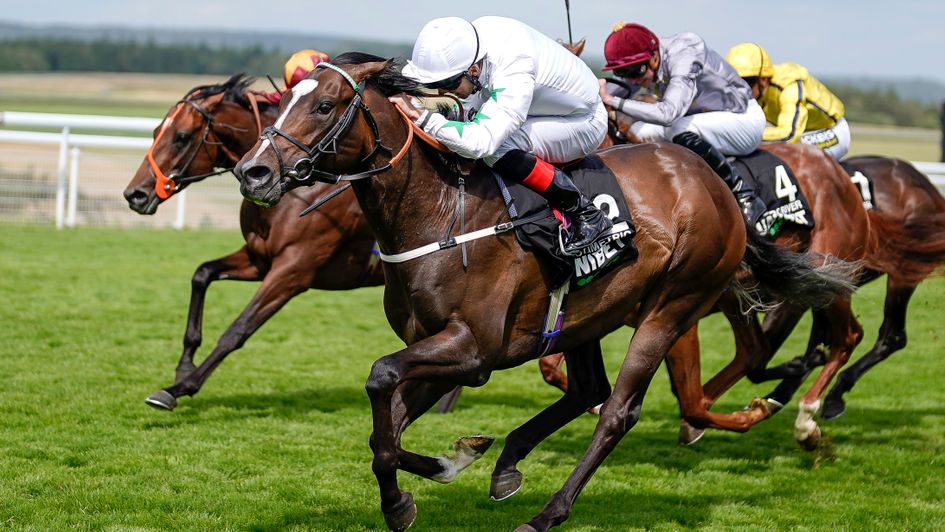 Asymmetric showed a smart turn of foot to win the Unibet Richmond Stakes and cap a fine Goodwood meeting for Alan King.

Cheltenham Festival-winning trainer King – who sent out his first Group One winner earlier in the week when Trueshan landed the Goodwood Cup – saw Asymmetric gain compensation for his narrow second in the July Stakes at Newmarket.

As the Group Two field approached the furlong marker there was just enough room for the Martin Harley-ridden 11/4 favourite to squeeze between Khunan and Gis A Sub, and once in the clear he shot to the front.

The race was not over, however, as Super Sprint victor Gubbass was challenging widest of all, but the unlucky story of the race looked to be Norfolk winner Perfect Power.

Paul Hanagan dropped him out last in the early stages and everywhere he went he found the door closed, finishing full of running.

Asymmetric ultimately had half a length in hand of Khunan, with Gubbass a nose back in third and a neck and the same to Ebro River and Perfect Power. 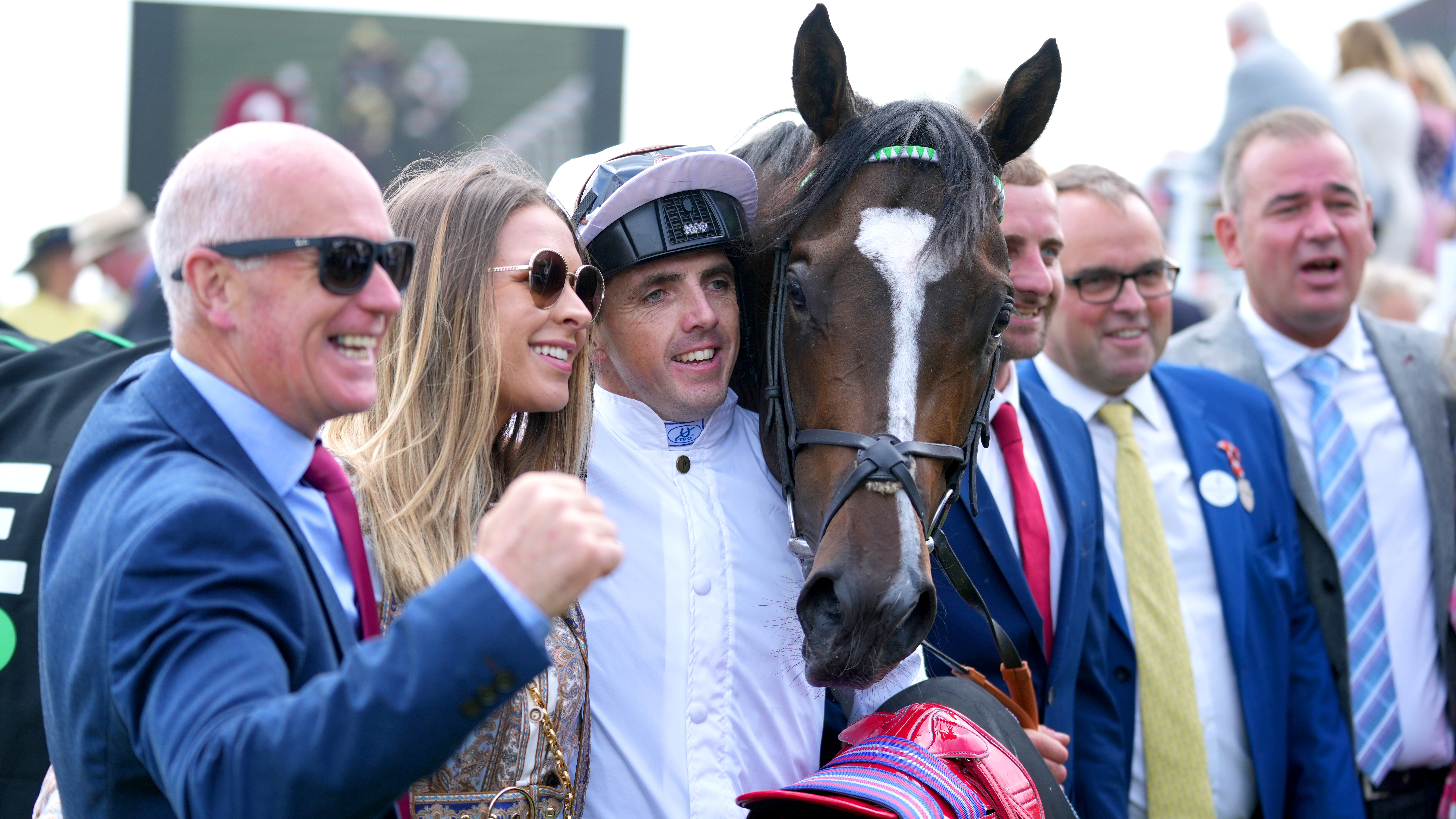 King said: “I hoped and thought he would run very well today, but I wasn’t thinking he had to win this.

“He has an absolutely wonderful temperament, he’s horizontal, he’s so laid back.

“He has a pretty lethal turn of foot when he does go, they looked to go pretty steady early and we always take a lead and then drop back and they probably weren’t going strong enough.

“Martin was very happy with him, he said he was always going to drop in and have one crack at him, which we’ve done.

“He’s not the biggest, I think he’s just that little bit sharper for the July Stakes.

“He does nothing at home, he eats and sleeps and you just have to give him the odd squeeze in a morning to make sure all is good.

“He does go on soft, but we’ve always said he’s a much better horse on top of the ground.”

On plans, King said: “He’s in the Gimcrack, he is entered in the Group One (Prix Morny) in France, we’ll see what the team want to do.”

Johnny Murtagh once again proved that when he sends his runners over to Britain they warrant the closest inspection as Ottoman Emperor ground out victory in the John Pearce Racing Gordon Stakes at Goodwood.

Murtagh recently enjoyed his first Royal Ascot winner with Create Belief, having won the 2014 Ebor with Mutual Regard, and operates at a healthy strike-rate when he makes the short journey across the Irish Sea.

Unraced at two, Ottoman Emperor made his debut at Dundalk in May behind Sir Lamorak before winning a Cork maiden in April.

He then won a Gowran handicap before also being successful in a decent event at Navan – but this represented a steep step up in class against a number of rivals who had already run in Classics.

Sent off an 11/1 chance, Ben Coen was determined to keep his mount close to the pace and tracked Wordsworth before hitting the front over a furlong from home.

He took two lengths out of the field, although with 100 yards to run his stride began to shorten and the chasing pack closed in.

Sir Lucan and Frankie Dettori did best of those, getting to within half a length, but the line came in time for Coen. Derby fifth Third Realm was third, with Youth Spirit and Wordsworth also close up. 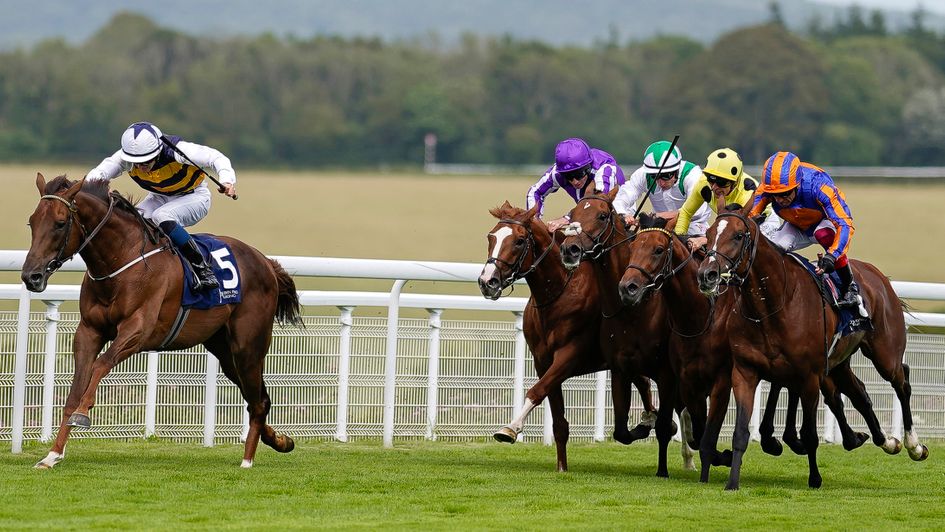 The winner was cut to 10-1 from 20s for the Cazoo St Leger by Betfair – and the Doncaster showpiece looks like being the target.

Murtagh said: “He did it the hard way – Ben said he was racing lazily the whole way, but he’s like that.

“He’s a little bit babyish, we don’t really know how good he is or how good he can be, coming to the top of the hill he (Coen) said he lost his balance a little bit and then he grabbed hold and really became strong.

“He got to the the front a bit soon, but he wasn’t stopping once the other horses got to him, he put his head down.

“One thing about him is he’s really genuine and really tough, I think he stays the distance really well.

“We were here to find out – is he a mile-and-a-half horse or can he stay a mile and six? I think he answered a lot of questions today.

“We’d love to give him a shot at the English St Leger next, it’s a very nice race and we’d love to have a live chance in it.”

Mark Johnston broke his duck for the week when Qaader relished the step up in trip to take out the Unibet ‘15 To Go’ Kincsem Handicap at Goodwood.

The Night of Thunder colt had disappointed on his previous start at Newmarket, but judging from the way he dominated at the business end, he has now found a comfort zone that his trainer can exploit further. 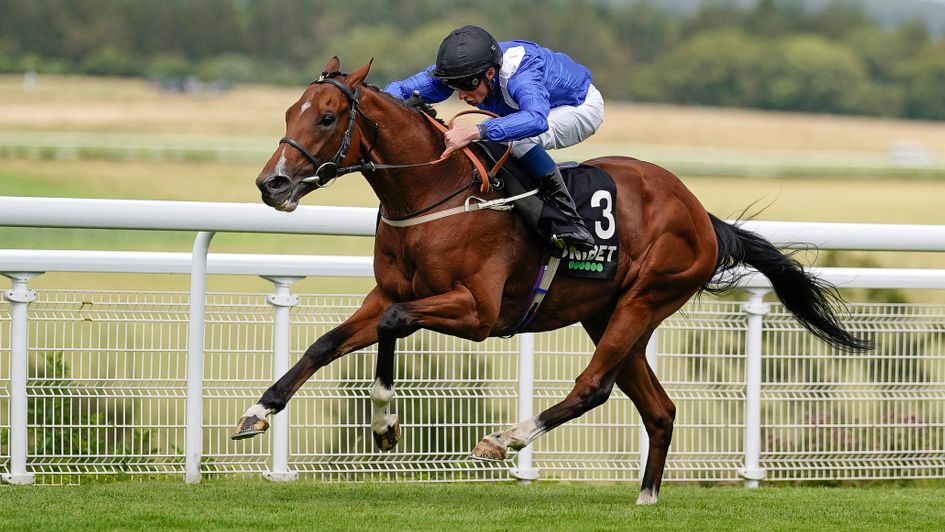 Johnston – who revealed the serious suspensory injury suffered by Sir Ron Priestley in the Goodwood Cup has brought to an end the talented stayer’s career – said of Qaader: “His form had been mixed and there were concerns about the ground and the trip, and a combination of the two.

“We would have liked the ground to be faster, but he’s handled it well, and he got the trip well.”

Reflecting on the first half of Goodwood week, Johnston added: “It’s been very frustrating so far, and we knew our fate over the weekend when there was so much rain about.

“We are devastated about Sir Ron Priestley who first suffered a suspensory injury in 2019. This one has damaged the other branch of the suspensory which is a lot more serious.”

Aswan triumphs before another winner for Balding

Owned Shaikh Duaij Al Khalifa inherited the colours from his 80-year-old uncle Shaikh Isa Bin Mubarak Al Khalifa, with the dream of having a winner at Goodwood where Ahoonora landed the Stewards’ Cup in 1978.

Trainers Simon and Ed Crisford were beaming after the 13/2 shot got home by half a length and a short head from Blue Collar Lad and Bastogne in a blanket finish.

Simon Crisford said: “We were worried about the ground and happy it dried out. It was a great ride from James who had the colt in the perfect position throughout.

“It’s great for Shaikh Duaij that he has acquired colours synonymous with top horses from back in the seventies, including Ahoonora who landed the Stewards’ Cup here and went on the be a Group-winning sprinter.”

Wilderness Girl dominated the market for the Tatler EBF Maiden Fillies’ Stakes and was equally authoritative in the race itself, the 7/4 favourite scoring in convincing fashion from Brazilian Beach and Silverdale in the hands of William Buick.

Her trainer Andrew Balding said: “I’m really pleased. She ran promisingly on her first start at Newmarket and is a nice filly to go on with. We weren’t worried about the ground.”

Buick then took the concluding race on the card, the World Pool Handicap, aboard Roger Teal’s Whenthedealinsdone.

Starting at 8/1, the gelding ran prominently and prevailed by a length and half over the five-furlong trip.