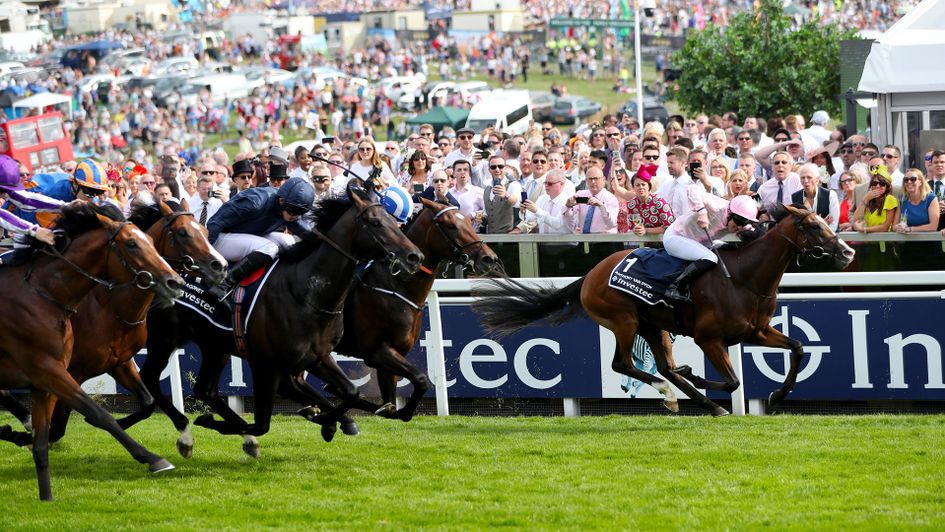 Aidan O'Brien secured a record-equalling seventh Investec Derby thanks to Anthony Van Dyck and Seamie Heffernan in a tight finish for the prestigious prize.

Eighteen years on from his first triumph in the premier Classic with Galileo, the County Tipperary trainer saddled no less than seven of the 13 runners, with the previously unbeaten Sir Dragonet heading the market at 11/4 after being supplemented earlier in the week.

Anthony Van Dyck - a three-time winner as a two-year-old - earned his shot at Derby glory with an impressive comeback victory in the Lingfield Derby Trial three weeks ago and was also prominent in the betting at 13/2, following support in the minutes leading up to the race.

Heffernan's mount raced in mid-division for much of the way, and still had more horses ahead of him than behind inside the final quarter-mile

Sir Dragonet and Madhmoon - trained by the 86-year-old Kevin Prendergast - were disputing the lead racing inside the final furlong, but Anthony Dan Dyck darted up the inside of the pair and galloped on strongly against the far rail.

Madhmoon boxed on for second to deny O'Brien a clean sweep, with another Ballydoyle inmate in Japan flying home to finish third, ahead of his stable companions Broome and Sir Dragonet in fourth and fifth respectively.

Sky Bet's Michael Shinners said the Derby result was a good one despite paying out on four places.

"Despite being well backed in the show, Anthony Van Dyke was a very good result," he said. "The places were fairly kind for us as well with the popular horses such as Bangkok and Line Of Duty both out of the frame."

Meanwhile, Anthony Van Dyke's victory brought home part one of an 80/1 double with Sky Bet that also requires Virgil van Dijk to score anytime in 90 minutes during tonight's Champions League final! Can the Liverpool defender deliver for the punters who took up this offer?

O'Brien said: "It's incredible. I'm so delighted for everyone and privileged to be part of the team.

"The lads (John Magnier, Michael Tabor and Derrick Smith) put so much in and everyone who works in Ballydoyle and Coolmore - all the way along. There's so many people, from the ground up to the riders, that I'd like to thank.

"I wasn't sure (if he would win), they were all there with a chance and I knew Kevin's horse was there (Madhmoon) and I knew he'd be in top shape and he's a very good horse.

"We were just hoping and so delighted to be involved at that part of the race."

He added: "Seamus had been placed so many times and has worked for us for so long - he's such a special fellow. He's always been a world-class rider and I'm so delighted for him."

Asked about plans, O'Brien said: "I think the lads will decide, like they always do, but that is what we thought - that the winner would go back to Ireland (for the Irish Derby, at the Curragh). It is a nice progression for the horse.

"We have the track, the facility and the stands there and it is a three-year-old only race - after that they have to go in against the older horses. We will see how he comes out of it and a decision will be made by them."

Heffernan said: "I was following Ryan (Moore, on Sir Dragonet), who I thought was the biggest danger. It was a big ask for Sir Dragonet on his just his third run, but mine had danced every dance.

"I've been around plenty of Derby winners, I rode his father in a trial and won it. It means a lot to win it.

"I'm always confident riding for Aidan. Anything can happen, it doesn't matter whether they are favourite or a big price - he trains them all for the big day.

"I haven't had to take a pull going down to the two pole and wait for a run in a long time - I was confident I was going to get plenty of money."

"It’s an unparalleled era of success as the behemoths of the stallion world, a staggering band of broodmares and a quiet, unassuming, training genius tighten their stranglehold."

Madhmoon goes so close for Prendergast

Veteran trainer Kevin Prendergast was proud of Madhmoon in defeat.

Prendergast - who will celebrate his 87th birthday next month - has enjoyed a glittering training career since first taking out a licence in 1963, enjoying eight Classic victories in his native Ireland and a British Classic success with Nebbiolo in the 2000 Guineas 42 years ago.

Having impressed in two starts as a juvenile, hopes were high Madhmoon could add to Prendergast's Classic haul this season, and his staying-on effort when fourth in the 2000 Guineas at Newmarket earned him a tilt at the biggest of them all.

There were doubts beforehand about whether Madhmoon's stamina would be exposed over the extra half-mile, but after travelling strongly under Chris Hayes, he stuck to his guns admirably to finish a half-length second to O'Brien's Anthony Van Dyck.

Prendergast said: "We'd loved to have won, but we're very proud of the horse.

"(My heart) always pumps, but that (finish) made it pump a little bit more. He ran great, we're happy with him.

"It was a very good ride from Chris Hayes and he did nothing wrong. The best horse won on the day."

Gold said: "He stumbled at the bottom of the hill and he (Hayes) had to go a bit earlier than he wanted to.

"I'm thrilled and if you said that was going to be the outcome I would have taken that any day.

"I was convinced he wouldn't stay, so I'm delighted to be proved wrong."