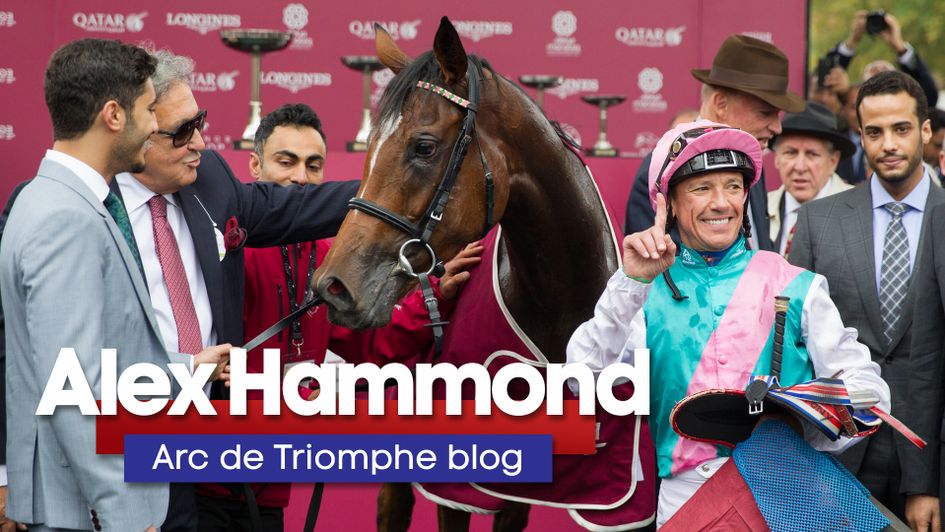 Sky Sports New's Alex Hammond focuses on the Prix de l'Arc de Triomphe in this week's blog ahead of her trip to Paris to cover Enable's bid at making history.

All eyes on ParisLongchamp this weekend and Enable's bid for an unprecedented third Arc win. Can she and Frankie Dettori do it?

I’m excited and privileged to be travelling to ParisLongchamp for Sky Sports Racing this weekend and I’ll be heading to the track for the first time in 26 years.

Back in 1993 we celebrated another superstar mare as Urban Sea won the most influential Group One on the racing calendar and what a legacy she has left behind, with Sea The Stars and Galileo amongst her blue blooded offspring.

Enable is about to write the final chapter of her career on the racecourse and however this thrilling tale ends, it was a bloomin’ good read!

If those closest to her aren’t suffering the odd sleepless night in the build up to what promises to be a great race on Sunday then they are made of sterner stuff than most of us.

Another privilege of my job is finding out about other lesser known members of the team that have all played their part in this great mare’s wonderful career.

We all know John Gosden is one of the most skilled operators in the training ranks and Frankie is possibly still the best rider in the world with a wealth of experience at his fingertips. What about the people that deal with her on a day-to-day basis?

It’s been lovely to find out about her regular work rider Imran Shahwani. Imran joined Gosden over 13 years ago and was taught to ride from scratch by the trainer, who it seems is as good at training equines as he is equestrians!

Can you imagine the pressure of getting the leg up on Enable each morning? So, to answer the original question, they can do it and oh my word, I truly hope she does.

You can see all the races from ParisLongchamp with us on Sky Sports Racing and we’ll be live from the track from mid-morning giving you a real flavour of this potentially historic day.

Who are the main dangers?

Well as you all know, there’s no such thing as a certainty and Enable won’t have things easy. There are probably four other protagonists.

Aidan O’Brien’s Japan provides the most credible threat. He is an improving three-year-old who looks to have plenty more to offer over a mile and a half. He beat Crystal Ocean in the Juddmonte International at York over an extended mile and a quarter on his latest start, but his two previous outings have come over 12 furlongs and O’Brien also wisely sent him for a sighter of ParisLongchamp back in July which resulted in a win in the Grand Prix de Paris. There’s more to come from this lad.

The recent record of older males in the Arc is surprisingly patchy, so the stats are against Godolphin’s four-year-old Ghaiyyath (Dylan Thomas in 2007 is the last older male to win). Having said that, the clock doesn’t lie and his win in Germany last time out wasn’t just visually impressive, it was achieved in a smart time. He is pretty one dimensional as a strong front-runner though and you have to go back to Helissio in 1996 to find the last horse to successfully make all in this Group One.

Sottsass is this year’s French Derby winner and there’s a lot to like about Jean-Claude Rouget’s colt. He has been carefully and cleverly campaigned and he has a scintillating turn of foot to boot.

Waldgeist has tried and failed to beat Enable three times, but the presence of Ghaiyyath with that strong front running style plays into Andre Fabre’s triple Group One winner’s hands. He shouldn’t beat her on bare form, but I’ve backed him to finish in the first three. He’s a solid yardstick and runs an honest race every time. He’s no slouch.

“When on a roll… it’s really surprising, really steamrollering and really worrying for his opposition” - @LynchySSR gives a fascinating insight into the power Ghaiyyath possesses… #MondayNightRacing pic.twitter.com/jyGD7ewk4Z

“The late Sea Of Class laid down the blueprint for how you might beat Enable; Sottsass has many of her qualities in spades” – @LynchySSR and @skysportsAlexH are in no doubt Sottsass has the tools to win the Arc… #MondayNightRacing pic.twitter.com/xBaRtSu3cQ

✅ Trained by Aidan O’Brien
✅ Ridden by Ryan Moore
✅ By Galileo
✅ Royal Ascot winner
✅ Grand Prix de Paris winner
✅ Juddmonte International winner @LynchySSR tells the story of Japan and why everything has been geared towards the Arc… pic.twitter.com/uhAub7TAXr

If she was to win a third Arc where would it rank in achievements during your racing career?

That’s a very good question, because over the years I’ve been lucky to watch so many magnificent horses achieve extraordinary things and every time it happens you say the same thing: “a horse like that only comes around once in a lifetime”; except, that's not been the case as there have been a few.

I suppose the one that springs to most people’s minds is the mighty Frankel and to witness his win at Ascot on Champions Day which took his record to 14 from 14 was quite something.

The hairs stood up on the back of your neck and tears pricked your eyes as he stormed home on his final racecourse appearance.

The victory came just eight months before his trainer Sir Henry Cecil succumbed to cancer, which made it even more poignant.

If Enable wins on Sunday there’s no doubt the victory will rank alongside those of the greats who have graced the turf before her. Three Arcs? It’s never been done and that tells you all you need to know.