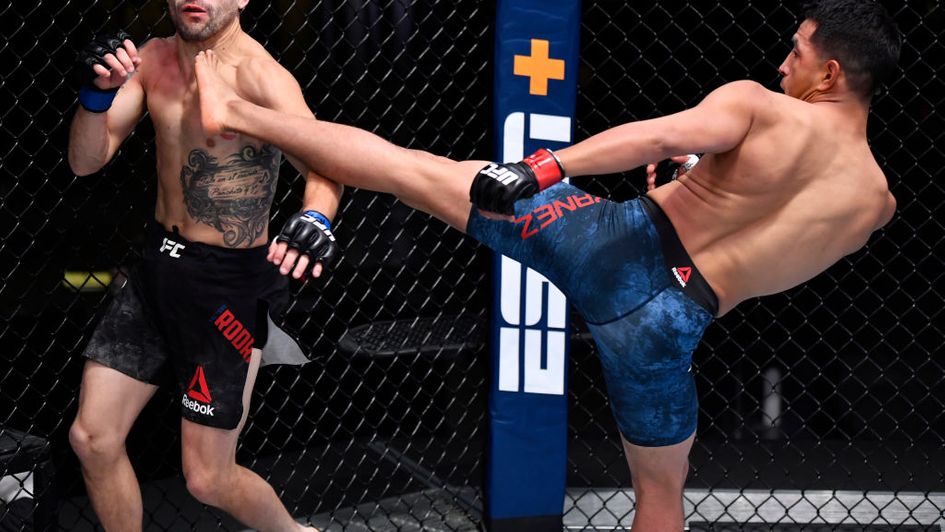 MMA expert Will Dean was in profit last weekend and now casts his eye over UFC Vegas 32, where Adrian Yanez features among his best bets.

2pts Adrian Yanez to win by KO/TKO at evens (General)

Suspensions, retirements and in-fight disqualifications have wreaked havoc for the UFC’s Bantamweight division in the last two years, and it all started with TJ Dillashaw. Having been one of the most consistently dominant and competitive fighters from 2012 to 2019, the MMA world was taken aback by the announcement that the two-time champion had tested positive for a serious performance-enhancing drug in 2019. Dillashaw claims that this was an isolated, one-off incident, but UFC fans are sceptical that the American’s rise to the top might have been assisted from the very beginning.

The debate surrounding Dillashaw’s legacy will likely rage on for years, but Saturday night will give a strong indication of his capabilities now that he is fighting clean and fairly. Such uncertainty makes his main event bout against Cory Sandhagen near possible to predict, as the former champion does hold some significant stylistic advantages over his opponent, and could pull off the upset if he is still at his best.

Attention therefore turns to some of the other exciting fights on a very well-matched card, with Kyler Phillips looking to continue his impressive streak against Raulian Paiva, Ian Heinisch clashing with Nassourdine Imavov, and Adrian Yanez concluding his unique social media ‘feud’ against Randy Costa.

KYLER PHILLIPS made a very unassuming start to his UFC career, with his prior performances on the regional scene failing to impress. The Matrix was somehow able to completely reinvent himself in the following years, picking up impressive and dominant wins over Gabriel Silva, Cameron Else and Song Yadong. With a win on Saturday night, a spot in the top 15 and a fight against a big-name opponent beckons.

Raulian Paiva stands in the way of that goal, hoping to extend his own winning streak to three and begin climbing the rankings himself. The Brazilian is aggressive inside the cage and always looks to find the finish, despite 13 of his 20 wins coming by decision. Paiva is moving up 10lbs in weight for this fight, taking away a significant size advantage he enjoyed over most opponents at Flyweight.

The physical attributes of both men could be the deciding factor in this fight, as Phillips looks to hold both a speed and strength advantage against the Brazilian. Combined with his higher striking output, better footwork and superior striking defence, Phillips should win the majority of the exchanges on Saturday night. The Matrix has also shown an impressive well-roundedness in recent fights, and could also win with composed top control off a few takedowns.

Paiva is by no means a bad fighter, but Phillips’ skillset is just head and shoulders above the Brazilian’s at this point in his career. The public money has been steadily backing Phillips since fight week began, which seems a smart choice to me.

Before the main card kicks off, ADRIAN YANEZ squares off against Randy Costa in an exciting firefight at Bantamweight. Both men are committed to putting on a show for the fans, with a gentleman’s agreement made on social media that the fight will be nothing short of a war (as well as insulting one another’s choice of post-victory snacks). It is refreshing to see two young prospects respect one another and have fun in the build-up to their fight, with fans dubbing it the ‘people’s main event’ as a result.

Yanez has rightly been favoured by the bookmakers for this one, as many believe he can be a future title contender in the division. The 27 year-old’s boxing is developed beyond his years, exuding a cool and calm demeanour in the cage as he slips punches and throws counters with pinpoint precision. On the other hand, Costa’s head movement is his biggest liability and Yanez should be able to catch him with straight punches all night.

Another key advantage comes in the cardio department, as both will be fighting at a frenetic pace for as long as this fight lasts. We have seen Yanez continue his output into round three, whereas Costa seemed to have bitten off more than he could chew after five minutes against Brandon Davis. Both men will certainly have made improvements from their previous UFC bouts, but it seems the knockout for Yanez will be just as plausible in the last minute as it will be in the first.

The sky really seems to be the limit for Yanez at this stage in his career, and a willing dance partner like Costa will only bring the best out of him. Combining him in a double with Kyler Phillips seems like a safe bet for 11/10, as both should have their opponents covered across all areas.

For an added wager, Yanez’s path to victory will give him plenty of opportunity to find the knockout blow. He has proven that he is capable of finishing an opponent in any round, and Costa has never been past seven and a half minutes himself. YANEZ TO WIN BY KNOCKOUT is the perfect prop bet at evens to complement the double on Saturday night.

IAN HEINISCH remains one of the hardest workers in the UFC’s Middleweight division, making six separate walks to the Octagon in just over two years. The calibre of opposition has naturally increased as a result of consecutive wins, but Heinisch remains a reliable fighter who possesses the same strengths and weaknesses in every appearance.

Analysing this bout against Nassourdine Imavov is therefore easier than others on the card. Heinisch is extremely durable and committed to landing takedowns, and he is a skilled BJJ grappler once he gets his opponent to the mat. In each of his three UFC losses, he was forced to to stand with his opponents and ultimately dropped a decision to each. The deciding factor for The Hurricane therefore lies in his opponents’ abilities to stay upright, and anyone who struggles to prevent a takedown will be in for a long night.

Imavov’s last performance against Phil Hawes, another wrestling-heavy fighter, showed us everything we needed to see, as The Russian Sniper was taken down on four occasions and was controlled for the entirety of the first two rounds. Imavov was able to turn the tide in the third, but this was more due to the cardio issues of Hawes than him making the needed adjustments. Heinisch’s determination and toughness should help him to grit out the third round, but he just needs to win the first two regardless.

Heinisch is the much more experienced fighter of the two, and Imavov has failed to impress in the UFC so far. Given the level of opponents that The Hurricane has faced in the last few years, this feels very much like a step down for him. He has become somewhat of a fan favourite on the preliminaries due to his unique backstory and gritty fighting style, and it seems that the UFC are rewarding him for his activity with a suitable opponent to get him back in the win column.

At 4/6, Heinisch to win feels like the banker on Saturday night’s card.